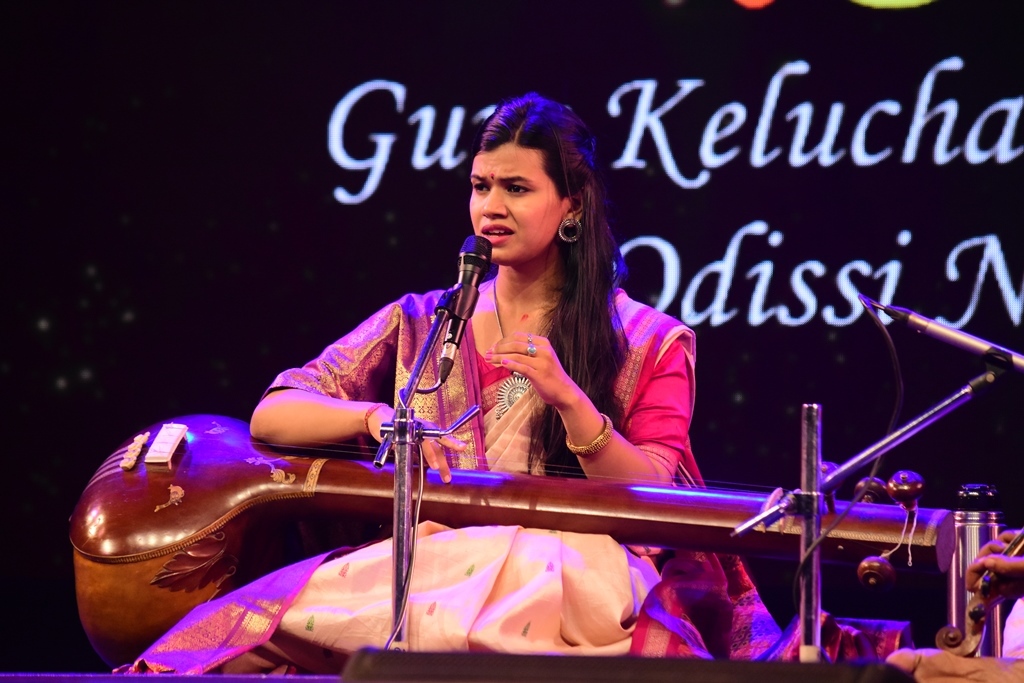 Bhubaneswar: Leading Odissi dance institution Srjan hosted the second evening of the 28th OMC Guru Kelucharan Mohapatra Award Festival on September 6th at Rabindra Mandap at 7 p.m. The inaugural evening witnessed a stellar confluence of music by Pandit Ronu Majumdar on the Flute, Ustad Taufiq Qureshi on the Djembe, and Ishaan Ghosh on the Tabla.

With over 13 years of taalim (training) under Guru Ramhari Das and Guru Brajabandha Ransingh, Sristi Swarupa Mishra is a rising Odissi vocalist, with her strong rendition of ragas throwing complex tonal techniques with lyrical ease. An All India Radio (AIR) artiste, she is a three-time recipient of the prestigious Governor’s award.

She commenced her recital with a Saraswati Vandana, in Raga Saraswati. This presentation was based on two interconnected TalaasTripata (in seven beats) and Jhampa (in 10 beats). Her second presentation for the evening was Raganga Gayan, set to Raga Mukhari and Ekatali. In this prabandha written by Kabi Chandra Kalicharan Pattnaik, she illustrated gamakas distinct to Odissi music with intricate swaravinyasa and padavinyasa.

Her third and final presentation was a ChatustalaaPrabandha “NahiKeKaridela,” written by KishorKabiShyamSundar Das. A traditional and popular Odissi composition, based on four taalas namely, Adatali, Tripata, Ektali, Khemta/Jhula, this rendition was a befitting conclusion to her recital. Blessed with a mellifluous voice, she carried the evening with a poise beyond her years.

Ably accompanied by the sangaat of eminent musicians Guru Dhaneswar Swain on the Mardala and Guru Ramesh Chandra Das on the Violin, Sristi’s melodious performance was the ideal beginning to a second evening of Art.

Feted Bharatanatyam exponent Vidushi Geeta Chandran and her ensemble the NatyaVriksha Dance Collective followed with a power-packed group presentation. Smt. Geeta Chandran has received the Padmashri and the Sangeet Natak Akademi Award. She is also a Tagore National Fellow. Through the work of the NVDC, she creates a new empowered vision of Bharatanatyam that resonates tradition but is inked with modernity, embracing new ideas that make sense for young audiences.

Living up to their reputation for crisp and professional group presentations, Natya Vriksha commenced their recital with Jai Bharat Alarippu, inspired by Bharatavarsha, our nation and culture. In this composition, the traditional “Alarippu” re-imagined to reflect and celebrate the concept of unity in diversity. This was followed by Sakhi Swaram, built on a Kannada Jatiswaram composed by the late Bharatanayam Guru (Padmashri) Shri K.N. Dandayudhapani Pillai.

Then, Smt. Geeta Chandran presented a solo composition, Lavanyatwam, a tribute to Guru Shri Kelucharan Mohapatra. In this, Krisha Nee BeganeBaro, she visits the line in three distinct and nuanced evocations, with the vatsalya, shringara, and bhaktirasas being emoted. Her decades of experience, expertise, and dedication to the Art were reflected in her beautiful exposition of these emotions on stage, in her captivating expressions, and technical virtuosity.

They were aided by the able technical design of Shri Milind Srivastav and sound engineering of Shri C. Anand Krishna. This concluded the second evening of the 28th OMC Guru Kelucharan Mohapatra Award Festival.

The third evening will feature the Shivagni, a musical ensemble with all top-ranking performers in their respective fields, who are all home-grown and based in Odisha. Led by Shri Agnimitra Behera on the Violin and Shri Srinibas Satapathy on the Flute, their unique blend of technique in the compositions enable them to present fusion stamped with the rigour and expertise of the classical discipline.

The festival, which is being streamed live on Srjan’s Facebook page and YouTube channel, has been curated, conceptualized, and designed by Guru RatikantMohapatra, with the programme execution by ShriDebiprasad