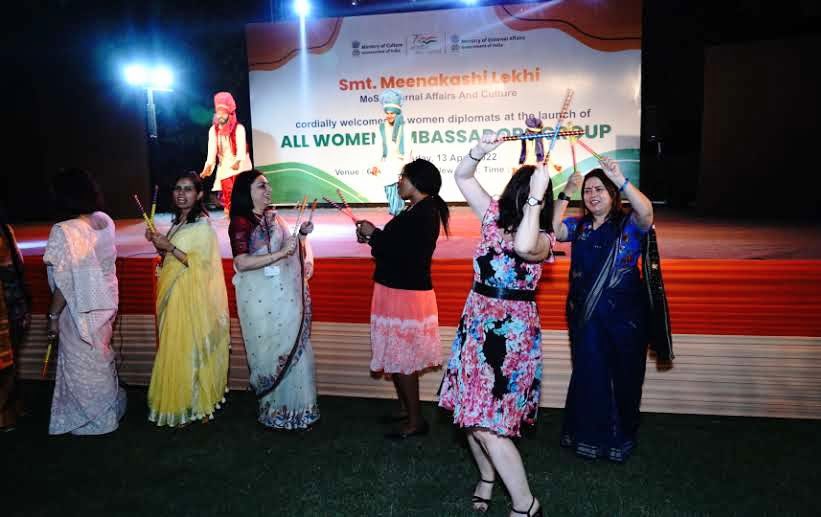 New Delhi: In a unique initiative , the Minister of State for External Affairs and Culture, Smt. Meenakashi Lekhi led the first introductory meeting of All Women Ambassadors’ Group in New Delhi today. All the Female Ambassadors to India, spouses of male ambassadors and female Charge d’Affaires of all embassies attended the meeting. The other attendees of the event included female officers from both the Ministries of External Affairs and Culture. The event was organized as a joint initiative of the Ministry of Culture and Ministry of External Affairs to celebrate Azadi Ka Amrit Mahotsav.

The intention to form this group lies in the keen desire to realize the universal theme of sisterhood and stand in solidarity with each other and for each other. The request to form an All-Women Ambassadors’ Groups was floated to the Minister by H.E. Ritva Koukku-Ronde, Ambassador of Finland to India.

The formation of the grouping is of immense significance in the light of limited representation of women in the international diplomatic arena. Through periodic meetings and discussions, the group aims to gain an insight into female leadership and gender equality in political and private sector.

Smt. Lekhi underscored the importance of this network as a means to facilitate communication and create a support web for all Women Ambassadors to India. Smt. Lekhi spoke on Gender equality which according to her is not only a fundamental human right, but a necessary foundation for a peaceful, prosperous and sustainable world. She also highlighted the need to realize the Sustainable Development Goal 5 i.e. Gender Equality through Women Empowerment to create an inclusive and just society. The event also provided a cultural touch of India to all the Ambassadors as there were cultural performances organized by the Ministry of Culture.

The Kathak virtuoso Padma Shri Smt. Shovana Narayan presented a beautiful dance presentation which was followed by a presentation from Papiha Desai and dance troupe on “Dances of India” highlighting the kaleidoscopic diversity of dance forms of India – Garba, Dandiya, Giddah among many others.

Smt. Lekhi highlighted the importance of the timing of the formation of the All-Women Ambassadors’ Group in the background of the just concluded Navaratri celebrations. She also informed the Ambassadors of the rituals and practices associated with the festival. Special Navratri cuisine was served for all Ambassadors at the event to provide them an insight into the Culinary Cultural Heritage of India. The entire event was planned under the ongoing Azadi Ka Amrit Mahotsav which celebrates 75 years of India’s independence.