Tomar launches the 11th Agriculture Census in the country 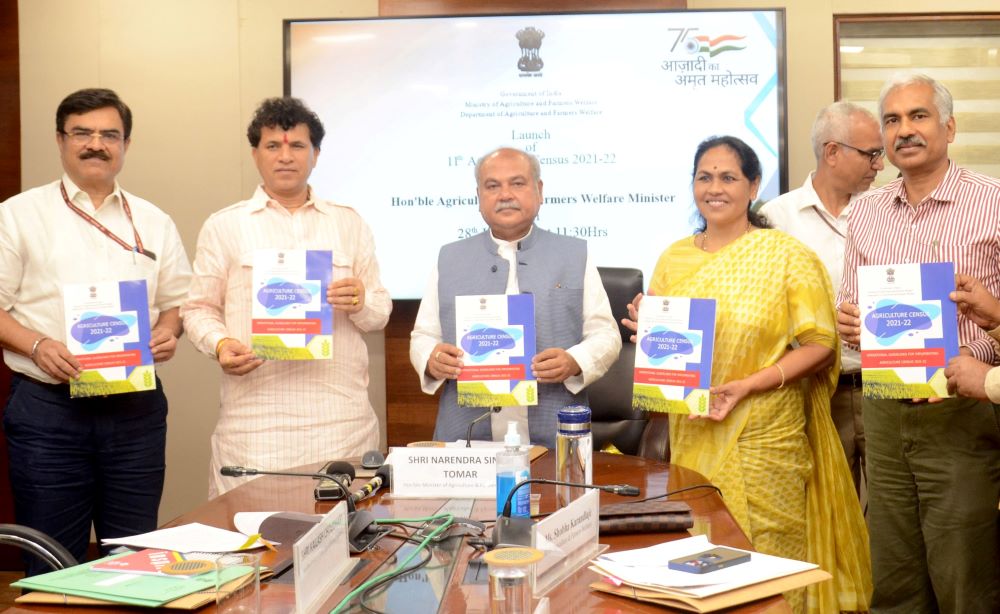 New Delhi: The Eleventh Agricultural Census (2021-22) was launched in the country today by the Union Minister for Agriculture and Farmers Welfare, Shri Narendra Singh Tomar. Speaking on the occasion, Shri Tomar said that this computation will bring huge benefits in a vast and agricultural country like India.

Shri Tomar said that under the leadership of Prime Minister Shri Narendra Modi emphasis is being given on increasing farmers income. Besides there is a need to change their standard of living, organize small farmers in order to empower them, attract them towards remunerative crops and ensure the quality of the produce at par with global standards.

During the programme, Shri Tomar conveyed his greetings for the Agriculture Census and said that the Agriculture sector is reaping the fruits of concrete steps taken by Prime Minister Modi, the country is rapidly moving towards digital agriculture.

This is the time to make full use of technology in this computation. He said that Agriculture Census should be thought of in a broader perspective. Agricultural computations can also contribute to the mapping of crops, so that the country gets its benefits. Shri Tomar asked the Central Departments, State Governments and concerned institutions to carry out this census with full dedication.

On the occasion, Shri Tomar released the Handbook on Operational Guidelines for Census for the use of States/UTs, and launched the Data Collection Portal/App. Union Ministers of State for Agriculture and Farmers Welfare, Sushri Shobha Karandlaje and Shri Kailash Choudhary, Agriculture Secretary Mr. Manoj Ahuja, Additional Secretary and Financial Advisor Shri Sanjeev Kumar and Senior Officers of the States/UTs were present in the programme.

Agriculture Census is conducted every 5 years, which is being undertaken now after delay due to corona pandemic. The field work of agricultural census will start in August 2022. Agricultural Census is the main source of information on a variety of agricultural parameters at a relatively minute level, such as the number and area of ​​operational holdings, their size, class-wise distribution, land use, tenancy and cropping pattern, etc.

This is the first time that data collection for agricultural census will be conducted on smart phones and tablets, so that data is available in time. Most of the States have digitized their land records and surveys, which will further accelerate the collection of agricultural census data. The use of digitized land records and the use of mobile apps for data collection will enable the creation of a database of operational holdings in the country.