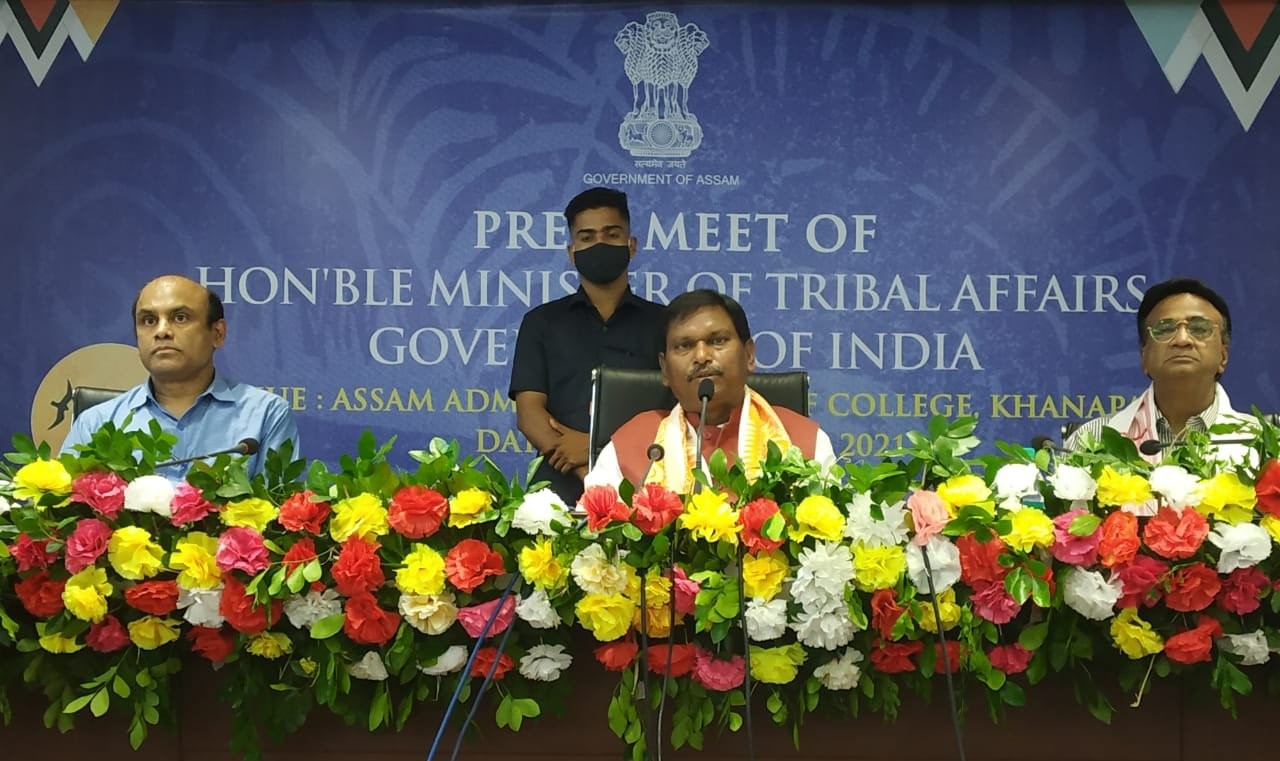 New Delhi: Arjun Munda, Minister of Tribal Affairs, accompanied by Pravir Krishna, Managing Director, TRIFED and other senior officials, successfully concluded a two-day visit to Assam on September 13, 2021. The Union Minister, who addressed a Press Conference at Assam Administrative Staff College today, said that the Ministry of Tribal Affairs is committed towards proper implementation of tribal development programmes in the State and he also informed about future plans for augmenting tribal development here.

While addressing the media persons, the Union Minister informed that his Ministry’s focus is on bringing about holistic development of tribal inhabited areas through marketing and promoting tribal and ethnic products at national and international levels while keeping their organic and natural processing ways intact. He said that Tribal Affairs Ministry coordinates with around 40 ministries and has been working with a coordinated approach for all-round development of the tribal areas in the country. Another 184 Van DhanKendras will be established in Assam as discussion held with the Chief Minister of the State on Sunday, he said.

Munda also informed that 1700 model villages have been targeted from Assam for the upcoming Pradhan MantriAdarsh Gram Yojana. Tribal residential schools will also be established in the state where 480 tribal students can be accommodated in each school with all academic facilities along with sports arena, teachers’ quarters and guest houses, he informed.

The Union Minister Arjun Munda, during his 2-day visit to Assam, also called on JagdishMukhi, Governor of Assam at Raj Bhawan, Guwahati. During the meeting, the Minister and the Governor discussed the entire gamut of tribal development activities in the state, in particular the programmes being implemented such as MSP for MFP, Van DhanYojana etc. They spoke at length about tribal livelihoods and enterprises in Assam and also contemplated upon the way forward in terms of implementing tribal development programmes in a strategic manner and improving the livelihoods of tribals in the state.

Earlier, the Minister started the second day of his tour to Assam with a visit to the renowned Shakti PeethKamakhya Temple where he paid his obeisance to the deity. Over the course of his visit, the Union Minister reviewed the ground level implementation, challenges and progress of the tribal development schemes.