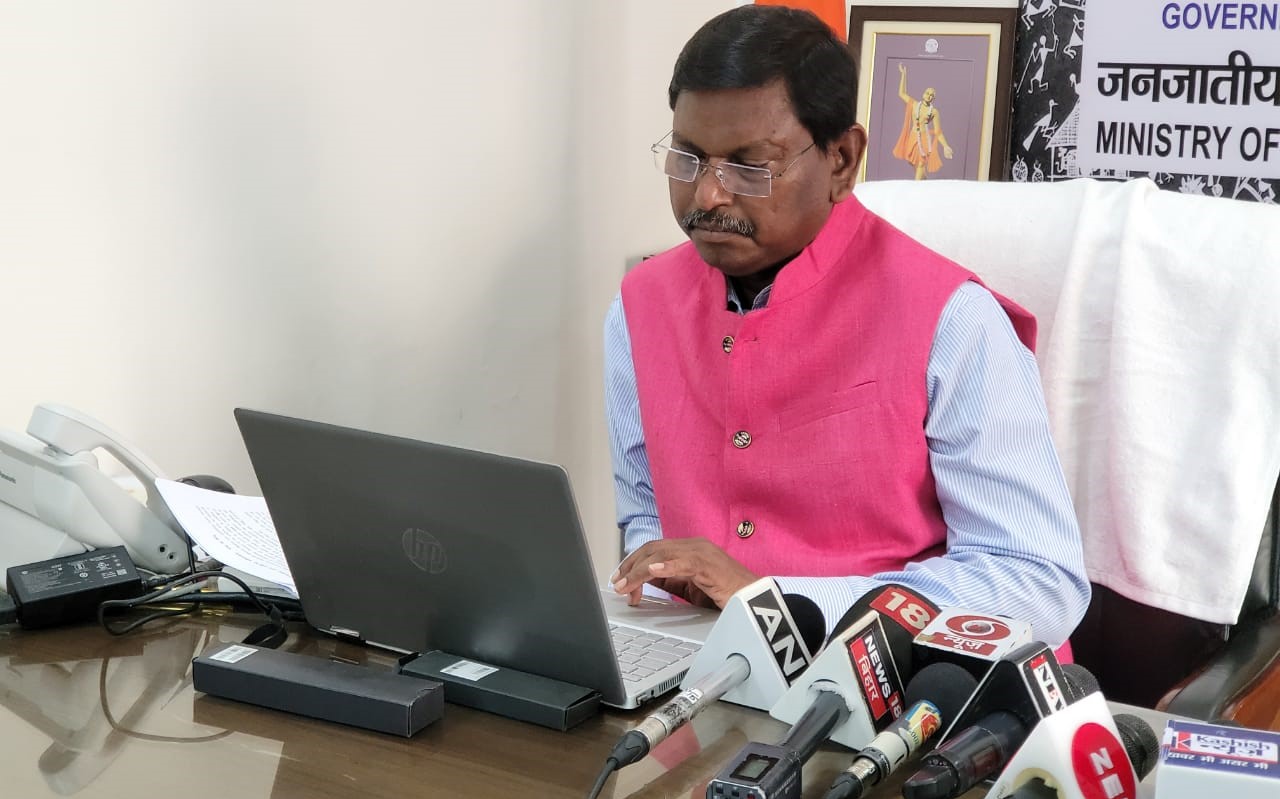 New Delhi: The Minister of Tribal affairs, Shri Arjun Munda has said that for the areas covered under Adi Adarsh Gram Yojana, we need to ensure that the extraction of Natural Honey and Bee Keeping is brought within ambit of Community Forest Rights under FRA. He was addressing at the National Conclave on “Wild and Forest Honey” organized by TRIFED in collaboration with Ministry of Agriculture & Farmers Welfare and National Bee Board. Shri Arjun Munda virtually addressed the conference.

Shri Arjun Munda further said “Beekeeping activity has been recognized as one of the important activities by Government of India for its promotion and development to achieve “Sweet Revolution” in the endeavour of enhancing the income of bee farmers and honey gatherers”.

Shri Arjun Munda also said “Our strength is plant based food in which honey stays on the top with high medicinal values. Honey plays an important role in Ancient Ayurvedic system of treatment and it is used not only in our food but also has medicinal values”.

He further explained that our challenge is to maintain the quality of honey and avoid adulteration; and directed the concerned authorities to prepare and maintain a database of those who naturally extract Honey and areas which specialize in honey gathering and extraction. We should also geo-tag these areas which specialise in wild and forest honey production to generate awareness about wild and forest honey production, he said.

“I am happy that TRIFED has joined hands with Ministry of Agriculture and National Bee Board, to accelerate the implementation of such new and key initiatives that will go a long way in empowering the underprivileged tribals”, said Shri Arjun Munda, Minister for Tribal Affairs, while delivering the key note address at the National Conclave on “Wild and Forest Honey” today.

Shri Arjun Munda thanked TRIFED for organising the event and said “I hope TRIFED as an implementing agency for formation of 14 Honey Farmer Producer Organisations (FPOs) will assist in taking ahead the vision of our Prime Minister in making country AtmaNirbhar. The formation of Honey FPOs will prove to be a boon for tribal beekeepers and honey gatherers by bringing a Madhu Kranti”. He also emphasized on the need for sustainable development of the sector.

The conclave was organized by TRIFED, Ministry of Tribal Affairs in conjunction with National Bee Board (NBB) as a part of campaign of the Ministry of Agriculture and Farmers’ Welfare’s “Kisan Bhagidari, Prathmikta Hamari”.

The campaign is a part of the Azadi Ka Amrit Mahotsav celebrations and will run from 25th to 30th April, 2022. Supported by National Agricultural Cooperative Marketing Federation of India Ltd. (NAFED) & National Dairy Development Board (NDDB), the objective of this National Conclave is to create awareness about the production of forest and wild honey and of the tribals engaged in honey gathering.

Speaking on this occasion, Smt. R Jaya, Managing Director, TRIFED added “TRIFED has had an association with wild & forest honey with its tribal gatherers and beekeepers producing different forms of quality honey. We assure that the formation of 14 FPOs by TRIFED will lead to definite income augmentation of the tribal beekeepers & gatherers while ensuring quality honey for consumers”

The second half of the conclave featured technical sessions on topics like Honey Bee Colony and Floral Honey; production of Wild and forest honey; wild honey collection and wax processing and capacity building of tribal communities in bee keeping.

One of the key initiatives of TRIFED that was launched by Shri Arjun Munda, Minister of Tribal Affairs in December, 2021, was the formation of 14 Honey Producer Organisations in States of Chhattisgarh, Himachal Pradesh, Uttarakhand, Tamil Nadu, Karnataka, Andhra Pradesh, Odisha and Gujarat. These 14 Honey FPOs are a part of the central scheme “Formation and Promotion of Farmer Producer Organizations (FPOs)” of the Ministry of Agriculture & Farmers Welfare.

Wild and forest Honey ranks among the most popularly and widely used sweetener around the world with enormous health benefits. Honey apart from being a nutritional source, also carries with it antifungal and anti-bacterial properties while being considered a good source of antioxidants. Several cultures around the world use Wild and forest Honey and it also serves as a base for many traditional forms of medicines like Ayurveda, Siddha etc.

The health benefits of honey has been valued since ages. While being a handy cure for cough, cold, sinuses, eczema and many such health problems, honey is also used in Indian households for nourishing the skin and hair. Beekeeping activity has been recognized as one of the important activities by Govt of India for its promotion.

Under this scheme, special emphasis has been laid on beekeeping by the formation of FPOs in identified potential Districts/States. The National Bee Board (NBB), under the National Beekeeping & Honey Mission (NBHM), has planned to develop the scientific bee-keeping value chain for honey across 100 clusters in the country. TRIFED has been made the implementing agency by Ministry of Agriculture to undertake the formation of 14 Honey FPOs alongside NAFED and NDDB in the states of Chhattisgarh, Himachal Pradesh, Uttarakhand, Tamil Nadu, Karnataka, Andhra Pradesh, Odisha and Gujarat.

TRIFED has been implementing several noteworthy programmes for the empowerment of the tribals. In a short span of two years, it has sanctioned 3225 Van Dhan Kendras comprising of 55036 Van Dhan Self Help Groups (VDSHGs) covering 9.263 lakh beneficiaries in 28 States/UTs. These Van Dhan Kendras are at different Stages of development and many success stories have emerged till date.

The Kendras in Maharashtra, Manipur, Tamil Nadu, Karnataka, Odisha, Kerala, Tripura, Gujarat, Sikkim, Andhra Pradesh, to name a few, have begun producing many varieties of products. Under Retail Marketing, a total number of 119 Tribes India Outlets are functional as on date. Besides, two TRIFOOD Projects at Jagdalpur and Raigarh (Maharashtra) are under implementation for undertaking value-addition of various forest produces being procured by beneficiaries of Van Dhan Kendras. They are likely to be commissioned in the next few months.

TRIFED, as the nodal agency working towards tribal empowerment has been striving to transform the emphasis of the Prime Minister on Vocal for local and building a Atmanirbhar Bharat through various initiatives aimed at augmenting the income and improving the livelihood & lives of the tribal communities, while preserving & promoting their way of life, culture and heritage.