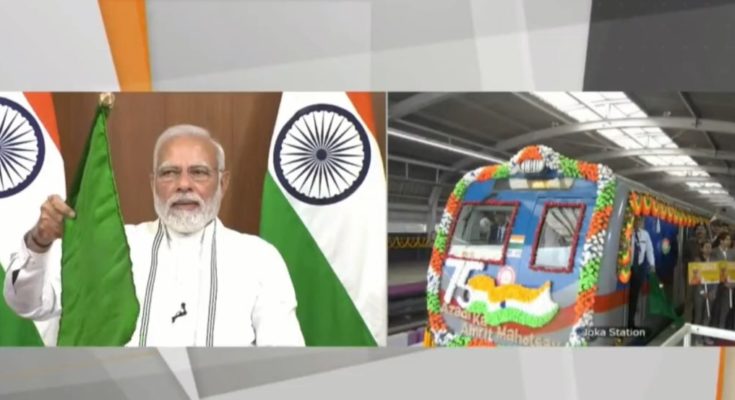 Addressing the gathering, the Prime Minister Modi apologised for not being physically present today, as for him, this is the day to bow to the land of Bengal as the history of the freedom struggle is infused in every particle of Bengal. “Land from where the call of Vande Matram originated, saw the flagging off of Vande Bharat today”, the Prime Minister said. The Prime Minister recalled that on Dec 30, 1943, Netaji Subhas Chandra Bose hoisted the Tricolour in the Andaman and Nicobar Islands and set the wheels in motion for the independence of India.

On the 75th year anniversary of this historic day, the Prime Minister informed that he got the opportunity to visit Andaman to name an island in honour of Netaji. He further added that India had taken a resolve to start 475 Vande Bharat trains during the celebrations of the Azadi ka Amrit Mahotsav and the train being flagged off today from Howrah to New Jalpaiguri is one of them. Mentioning the multiple projects whose foundation stones are being laid and inaugurated today, the Prime Minister said that the government is spending approximately 5000 crores for the completion of these projects.

The Prime Minister also informed that he will get the opportunity to dedicate many projects pertaining to the cleanliness of the Ganga and drinking water to West Bengal later in the day. He informed that more than 25 sewage projects have been approved in West Bengal under the Namami Gange Scheme. Out of which 11 projects are already complete and seven are being completed today. Work on 5 new schemes with an outlay of Rs 1500 crore is starting today.

The Prime Minister linked reforms and development of Indian Railways with the development of the country. That is why, he said, the central government is making record investments in the modern railway infrastructure. A nationwide campaign is going on to transform the Indian Railway, he said. He listed modern trains like Vande Bharat, Tejas Hum Safar and VistaDome coaches and the modernisation of Railway Stations including New Jalpaiguri, doubling and electrification of Railway lines as examples of this modernization.

The Prime Minister informed that while 20 thousand route kilometre rail lines were electrified in the first 70 years of Independence, more than 32 thousand route kilometres have been electrified since 2014. The Prime Minister said that the Metro Rail system is an example of India’s speed and scale today. “Metro network which was less than 250 km before 2014 had the highest share in Delhi-NCR. In the last 7-8 years Metro has expanded to more than 2 dozen cities. Today Metro is running on an approximately 800 km long Metro track in different cities of the country. Work is going on Metro routes of more than 1000 km”, he informed.

Highlighting the love for the land in the people of West Bengal, the Prime Minister remarked on the enthusiasm that they show in visiting the different places of cultural heritage in India and also learning from it. “The people of Bengal possess the spirit of Nation First, even in tourism”, he continued, “When connectivity in the county gets a boost, and the railway, waterway and highways are becoming more advanced, the result is Ease of Travel and the people of Bengal have also benefited from this”, Shri Modi remarked.