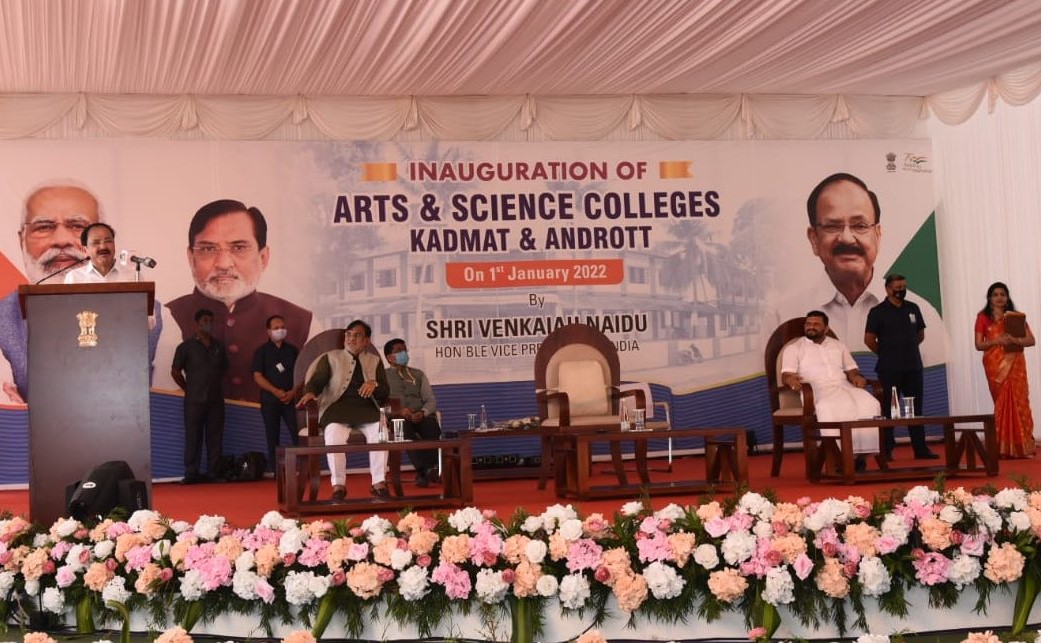 The Vice President, who is on a two-day tour of the Union Territory of Lakshadweep, was received by the Administrator of the UT, Shri Praful Patel and was accorded a guard of honour on his arrival on Friday.

Addressing the gathering at Kadmat island today, Naidu expressed happiness about his first official visit to the islands as the Vice President of India. He said that Lakshadweep boasts of a ‘unique confluence of ancient cultural heritage and pristine natural beauty’ and that he was humbled by the hospitality of the people.

Praising the beauty of Lakshadweep, he appealed to people that everyone must try to visit the islands at least once in their lifetime. Inaugurating the two colleges, Naidu said that the courses being offered will help the students of the islands, especially the girl students, overcome the geographical constraints of the region and pursue quality higher education with employment potential.

The Vice President, who is also the Chancellor of the Pondicherry University to which the colleges are affiliated to, emphasized the importance of skill development among students. He advised the administration to start more short courses in skill development toincrease the employability of the islands’ youth.

Observing the immense eco-tourism and fisheries potential of Lakshadweep, Naidu called upon the youth of the islands to utilise the courses offered in aquaculture, tourism and hospitality and proactively strive for excellence in these sectors where they have a natural advantage.

He expressed confidence that the new colleges “will not only serve the aspirations of the youth of the islands, but have a powerful multiplier effect and redefine the socio-economic landscape of the region.”

Naidu lauded the resolve of the people and administration of Lakshadweep for enforcing the complete ban on single use plastic on the islands. He also appreciated the fact that islands are moving towards 100 percent shift to green energy in a span of two years.

He called for a people’s movement for continuing the high cleanliness standards of the island under the ‘Swachh Lakshadweep’ program.

Highlighting the importance of ‘application’ in education, Naidu called upon the youth of the islands to also look for innovative solutions for long-standing issues of the islands such as the scarcity of potable water. He said the “real power of education gets unleashed when knowledge, skills and values are applied to bring about a transformation in the lives of the people.”

Referring to tourism and fisheries as the great strengths of Lakshadweep, Naidu said islands should aspire to become the role model for the country in eco-tourism and sustainable fisheries, without risking its fragile and sensitive biodiversity.  He noted various initiatives such as submarine optical fibre connectivity, expansion of airports, strengthening of infrastructure and plan to introduce water villas on some islands as laudable efforts.

On the aspect of livelihoods, Naidu highlighted an imminent need to upgrade the skills of people and make them up-to-date with global standards. He called for ensuring highest quality output, with better value-addition and greater visibility to build a brand name for products from Lakshadweep.

The Vice President appreciated efforts in large-scale cultivation of seaweed, measures to modernise the fisheries sector and steps towards increasing production of organic coconut oil and coir, among others.

On this occasion, Naidu advised the youth to take up physical activities such as yoga and sports for a fit body and sound mind. He also distributed equipment such as coconut tree climbing devices and other implements to beneficiaries.