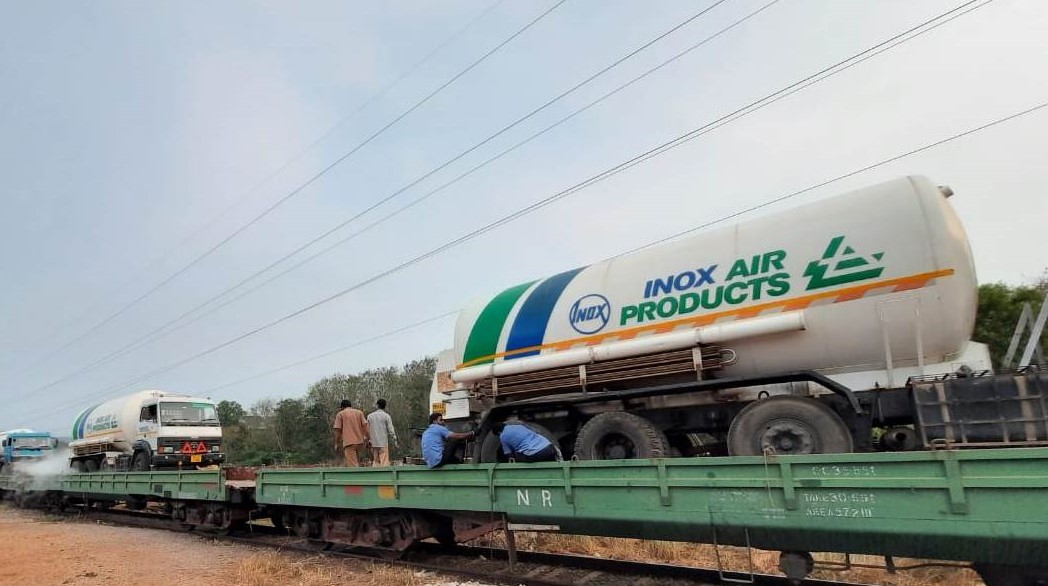 New Delhi: 858 Special freight trains were run by Northern Railway through green corridors carrying over 14,403 tons of Oxygen in cryogenic tanks and roll-on-roll-off road tankers for supply to the Hospitals and Covid care centers in the states of Punjab, Haryana, UP, Uttrakhand and Delhi. This is about 50% of the total LMO movement by Indian Railways.

Multi-disciplinary Freight Business Development Units (BDU) have been set up at zonal and divisional levels. 44 Goods Sheds over Northern Railway are being revamped and additional loading-unloading facilities are being provided. Northern Railway transported a record 26 million ton of food-grain between April and December 2021 to different states to support the largest food security programme in the world, the Pradhan Mantri Garib Kalyan Anna Yojana. Northern Railway also achieved the highest ever originating revenue loading earnings of 7,064 Crore from April-Dec’ 2021. Kisan rails are also being operated by Northern Railway from different states to maintain a steady supply of fruits and vegetables to the national capital at subsidized transportation rates.

Hon’ble PM inaugurated train services from Hazrat Nizamuddin and Varanasi to the newly constructed station at Kevadiya in Gujarat. This is providing convenient travel for people from northern states to visit the Statue of Unity. Services on the KSR & Kangra Valley hill sections have also been restored. Hop-on – Hop-off facility for tourists has been reintroduced in the Kalka-Shimla Rail section. The zone has maintained its punctuality performance of passenger train running at above 92%.

Safety has always been the prime focus; there has been no accident on account of collision and there is 44% reduction in derailments as compared to last year over the zone. All unmanned level crossings have been eliminated over Northern Railway in the year 2018-19. Now Manned Level Crossing gates are being converted to either ROB or RUB. Some LCs are been provided with Electric lifting barriers for enhanced road safety.

For safe operations of trains signaling systems have been modernized. Fog safety devices have been provided to Loco pilots on all trains. Intensive night patrolling of tracks is done for timely detection of rail fractures and displacement both in peak winters and summers season. GPS based hand held trackers have been given to the patrolling staff for timely reporting of faults.

Maintenance and up-gradation of assets are done on a regular basis. Periodic over-hauling of LHB with efficient mechanized cleaning is being performed in record time of 14 days at Alambagh workshop, Lucknow. Interiors of ICF rakes including Narrow gauge ones have are being enhanced under project Utkrisht, inproving their aesthetic appeal for the passengers. Bio-vacuum toilets are being retro-fitted in Northern Railway based coaches. The two Vande Bharat Express trains have completed more than 2 years of service and are proving highly popular with passengers intending to visit the temple towns of Varanasi and Shri Mata Vaishno Devi Katra. Sectional speed of trains has been increased in 495 Km portion and permanent speed restrictions at several spots have been removed.

On the remaining Katra-Banihal section of the USBRL project, laying of the Arch of the iconic Chenab Bridge was completed in April 2021. Construction of Pylon of Anji Bridge has been completed recently. 15 km of total Tunnel mining, breakthrough of 3 tunnels and laying of 3 bridges was completed in spite of the critical Covid situation.

Tunneling and bridge work of the Rishikesh-Karanprayag line is ongoing. A beautiful new station Yognagari Rishikesh has been constructed in the foothills.

Railway is working towards Mission 100% electrification. More than 70% Route Km over Northern Railway stands electrified. Northern Railway has been procuring cheaper power through open access in Punjab, Haryana, Delhi and UP, consequently, Rs. 300 Crore was saved as traction energy bill for these states. The Eco-friendly Head on Generation scheme has been applied on all 90 LHB primary EOG trains, saving High-Speed Diesel worth Rs. 33 Crore in 4 months, earning 12 thousand tonne carbon credits for Railways.

Use of Alternative Energy

For utilization of Solar energy, grid connected metered solar power plants are have been setup all over the zone. 40 Lakh unit electricity is being generated from them, with a reduction of 3251 ton CO2 emission.

Northern Railway has maintained an uninterrupted supply of medicines, injections and consumables to the health centers. RT-PCR tests are being done at the centers. For uninterrupted supply of medical oxygen, a 500L/minute capacity plant has been set up at NRCH. Oxygen plants have also been installed at all 5 divisional hospitals. Giving impetus to the Hon’ble PM’s vaccination programme, vaccination is being administered to all employees and that dependents.

Several sports persons, who are employees of NR, have made India proud at various national and global sporting events. 11 players and coaches from Northern Railway were in the Indian squad for Tokyo 2020 Olympics. Sh. Ravi Kumar Dahiya won Silver Medal and Sh. Bajrang Punia won Bronze Medal in wrestling event at the Olympics. Sh. Vijay Sharma, Coach of Silver Medalist weightlifter Ms. Mirabai Chanu has been promoted as OSD. Recently, a Indian Railway wrestling academy has been reopened at Delhi Kishanganj. This academy has been the cradle of many well knows wrestlers.