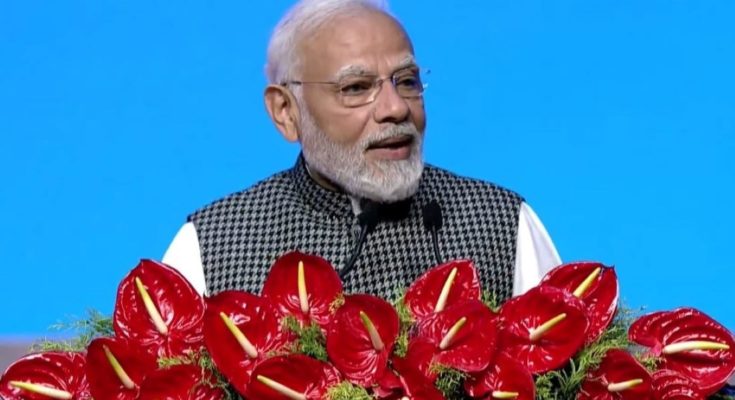 Pravasi Bharatiya Divas (PBD) Convention is the flagship event of the Government of India that provides an important platform to engage and connect with overseas Indians and enable the diaspora to interact with each other. The theme of this PBD Convention is ‘Diaspora: Reliable partners for India’s progress in Amrit Kaal’. Over 3,500 diaspora members from nearly 70 different countries have registered for the PBD Convention.

Addressing the gathering, the Prime Minister remarked that the Pravasi Bharatiya Divas is taking place in all its glory after a gap of four years and highlighted the significance and joy of personal interaction. Welcoming everyone on the occasion on behalf of 130 crore Indians, the Prime Minister said that the event is taking place on the land of Madhya Pradesh which is known as the heart of India and famous for the holy waters of Narmada, the greenery, the tribal culture and spirituality.

The Prime Minister remarked that the Pravasi Bharatiya Divas is special in numerous ways as India completed 75 years of its independence only recently. He also informed that the first-ever digital PBD Exhibition on the theme ‘Azadi Ka Amrit Mahotsav’ has also been organised which brings the glorious era to the fore once again. Highlighting the significant role of Pravasi Bhartiyas in the next 25 years of the journey of Amrit Kaal, the Prime Minister stated that India’s unique global vision and its role in the global order will be strengthened by them.

The Prime Minister observed that when we look at crores of Pravasi Bhartiyas on the global map, myriad images emerge simultaneously which paint the picture of ‘Vasudhaiva Kutumbakam’ and the feeling of Ek Bharat Shreshtha Bharat comes to the fore when two Pravasi Bhartiyas meet on any foreign land. “The feeling of pride in being the mother of democracy increases manifold when Pravasis are talked about as the most democratic, peaceful and disciplined citizens in different parts of the world”, the Prime Minister remarked.

The Prime Minister stated that he calls every Pravasi Bhartiya a national ambassador of India as they echo the voice of a powerful and capable India when the world evaluates their contributions. “You are the Rashtradoots (national ambassadors) of India’s heritage, of Make in India, of Yoga and Ayurveda, of India’s cottage industries and handicrafts”, Shri Modi continued, “At the same time, you are also the brand ambassadors of India’s millets.” He mentioned that 2023 has been declared the International Year of Millets and appealed to everyone to take some millets products back home.

The Prime Minister remarked that the Pravasi Bhartiyas have another important role to play in addressing the world’s desire to know more about India. He said that the world is watching India keenly with great curiosity and highlighted the extraordinary achievements of the nation in recent years. The Prime Minister gave the example of the Make in India vaccine and the record inoculation figures of more than 220 crore free doses to Indians.

He also mentioned India’s emergence in the global economy during the current period of instability and becoming the 5th largest economy in the world. The Prime Minister also gave examples of the rising startup ecosystem and make in India in the electronics manufacturing sector. He highlighted Tejas fighter planes, aircraft carriers INS Vikrant and nuclear submarine Arihant and said that it is only natural for the people of the world to be curious about India. The Prime Minister also mentioned India’s cashless economy and fintech and said that 40% of the world’s real-time digital transactions are being done in India.

The Prime Minister suggested that there should be a sustained effort to document the lives, the struggle and the contributions of Pravasi Bharatiyas for their respective countries through universities and research institutions. The Prime Minister said that each and every Bharatvanshi carries the entire India with him or her. “In the last 8 years, India has tried to strengthen its diaspora. It is India’s commitment today that wherever you are the country is for your interests and expectations”, he said.