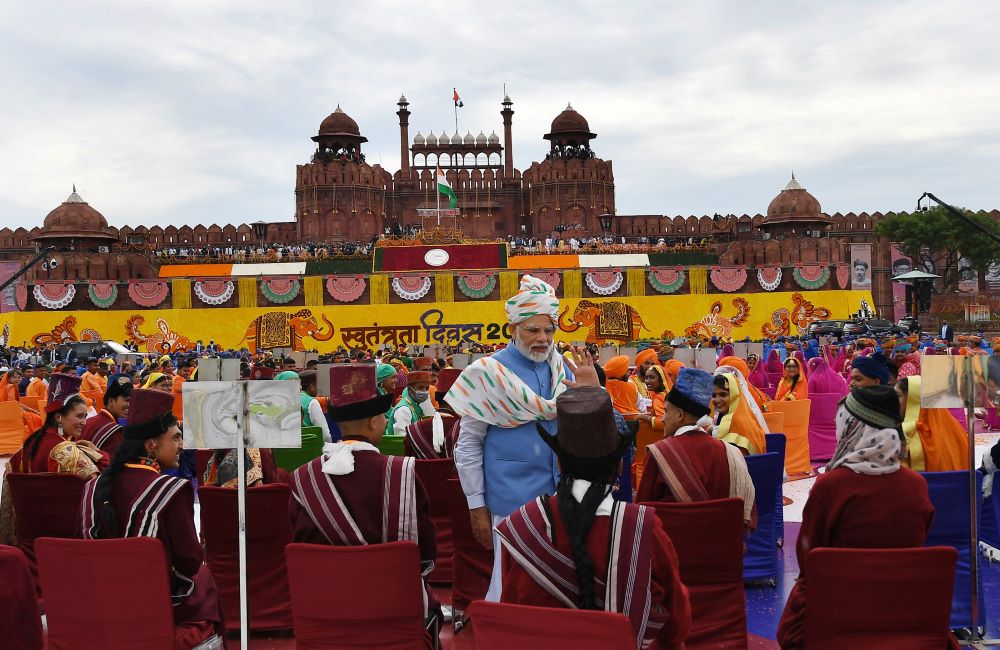 New Delhi: The Nation is celebrating its 76th Independence Day today. Prime Minister Narendra Modi led the nation in celebrating the Day from the ramparts of the Red Fort by hoisting the National Flag. The Tricolour received a ‘Rashtriya Salute’. The hoisting of the National Flag was synchronised with the 21 Gun Salute fired by the valiant gunners of the elite 8711 Field Battery (Ceremonial).

For the first time a made-in-India gun was used in 75 years for the ceremonial 21-gun  salute to the tricolour at the historic Red Fort on the occasion of  Independence Day. A home-grown howitzer gun, Advanced Towed Artillery Gun System  developed under the ‘Make in India’ initiative was used during the ceremonial 21-gun salute.The gun is completely indigenous  and developed by DRDO.

It reflects India’s growing capacity of developing arms and ammunition indigenously. As soon as the National Flag was unfurled by the Prime Minister, flower petals were showered at the Red Fort  in Amrit Formation by two MI-17 Helicopters. After the showering of flower petals, the Prime Minister  delivered his customary address to the Nation. At the conclusion of  his speech, the Cadets of National Cadet Corps  sang the National Anthem.

In his ceremonial address, the Prime Minister said that this Day is being celebrated not just in India, but in every corner of the world the Tiranga is flying with pride and honour.

He called it a historic day saying this is an auspicious occasion to march ahead with new resolve. Mr Modi said there was not a time under foreign rule when India’s sons and daughters had not struggled for her independence. He expressed gratitude to great leaders like Mahatma Gandhi, Netaji Subhash Chandra Bose, Dr BR Ambedkar and Vinayak Damodar Savarkar.

The Prime Minister said as the nation pays respects to freedom fighters, there is a need to remember their vision and dream for India during the Azadi Ka Amrit Mahostav. He said nation is grateful to Bhagat Singh, Rajguru, Ramprasad Bismil, Rani Laxmi Bai, and all other freedom fighters who shook the foundations of the British Empire.

He also saluted the architects of free India including Jawaharlal Nehru, Ram Manohar Lohia and Sardar Vallabhai Patel. He highlighted that India has been home to great thinkers like Swami Vivekanand, Sri Aurobindo and Gurudev Rabindranath Tagore. He added that Adivasi freedom fighters such as Birsa Munda, Tirot Singh and Alluri Sitarama Raju played a pivotal role in keeping the freedom struggle alive in every corner of India.

Mr Modi said India has marched ahead inspite of many challenges because she is the Mother of Democracy. He said that India has proved that the people have the inherent strength coming from its diversity and the common thread of patriotism that makes India unshakeable.

He stated that this soil has the power that despite many challenges, India did not stop, did not bow down and kept on moving forward. He stressed on the need to also salute the soldiers, police forces, and every citizen who combated many challenges and yet worked towards the vision of New India during the 75 years.