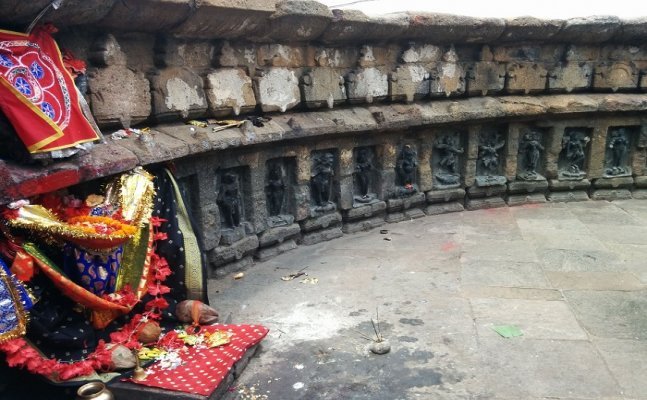 It was during a hunt for the whereabouts of an ailing friend we chanced upon a place called Hirapur, about 30 km from the capital city Bhubaneswar. It was noon and we could sense the footfalls of an ensuing solstice even much before the real summer. So to take a breather we went under a canopy of banyan trees and sat on the stones. From where it was hard to miss the sight of a circular stone structure of pre-historic look battling against the claws of gradual dilapidation.

It was the temple of `yoginis`, popularly known as `chausathi (64) yogini` temple of Hirapur. Later an encounter with a local priest was indeed enlightening and then I came to know that the structure dates back to the Bhoumakara dynasty in Odisha who was stated to be the staunch patrons of such a cult and its practices which was established in Odisha during the 8th and 9th century AD. 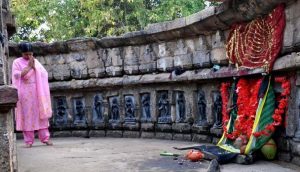 It is said that Matsyendra Nath practised and subsequently systemised it in the company of women in a circle which was then known as `Yogoni kaula`. A union of Shakti and Shiva and referred as Kaulamarga. In the charter of the then capital city was mentioned as Yayatinagar as Yayati was the king who was said to be having a strong fascination for such a cult.

It was also mentioned that ….”where the enjoyment of love is being continually intensified and still more intensified by close embraces by which fatigue is removed”. ….that means the ardent young couples exhibit their skill in conjugal closeness with their eyes dilated and the minds subdued, fascinated by amorous thoughts. 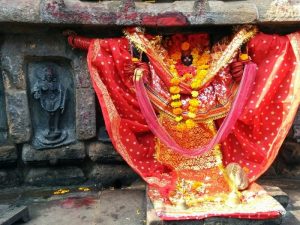 In the pursuit of love the skill and fine art involved were elaborately esteemed by those rulers and obviously, they patronised the cult that practised Kaulamarga. In India there are very few yogini temples and at the one at Hirapur, the grace and beauty of the yogini statues are far more superior than others.

What we found is that at Hirapur each yogini statue was depicted in different poses standing on one creature. Shooting an arrow like a huntress is the statue of Vira Kumari that stands on a hog and the other yogini standing on a parrot was identified as Kamakhsi. The creatures, in fact, symbolise the `bahanas’ (carriers). 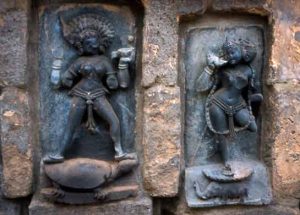 Out of the total number of statues about a half have been identified by experts such as Indrani,  Charchika, Nandini, Maheswari, Tarini, Agnihotri, Gandhari and so on. Besides one yogini, Mahamaya with ten arms, the rest have two or four arms. At the same time the outer wall of the shrine is carved with graceful statues where a queen is identified as Hira Mahadebi standing on smiling heads. So also the figure of a nymph with a glass of wine in the hand which is construed as intoxication and tantric sexual practices were inseparable. Like one yogini identified as Surapriya that can be connoted as fond of wine.

Though there are many legends about yoginis and their relevance, origins and the reasons behind such recognition but no empirical facts could be available and we were told to glean through the ancient texts. 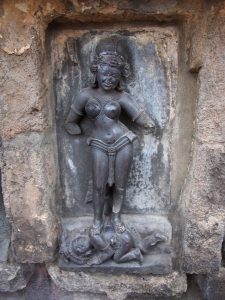 However, a story said that these yoginis played a crucial role helping Goddess Ambika to slay the dangerous demon Raktabirja who possessed the curious power to regenerate. Every drop of blood oozed out of him a new demon springs from the earth when the yoginis were deployed to drink the oozing blood before they fell on the ground. Similar such stories could be obtained when the yoginis played the catalyst role in the destruction of demons. It is stated in various tantric texts that “only when sexual union overcomes all traces of lust, does it acquire the powers of supreme bliss and rejuvenation”. 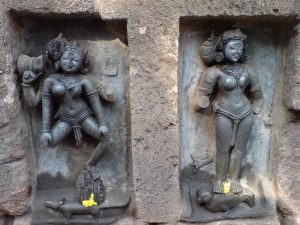 Which can be construed that the demons were the demons of lust that were powerful and immortal and quite capable of overwhelming the practitioner despite all defense command.

Those ruling elite of Odisha, Bhoumakars,  marked a new phase in the art and architecture of Odisha. Having found in sensuality, the rulers, a sound aesthetic quality strove for spiritual clarity through physical pleasure and this structure was perhaps a product of creative passion.

About the Hirapur yoginis, the statues here have suffered the dilapidation which is abundantly visible in the statues and in the shrine as well. Which needs further conservation.