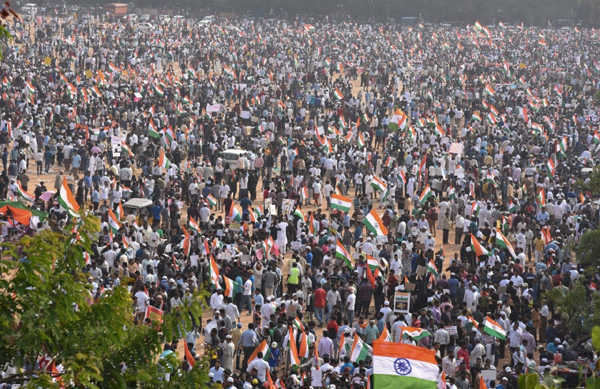 Hyderabad, Jan 7 (IANS) The anti-Citizenship Amendment Act(CAA), National Population Register(NPR) and National Register of Citizens(NRC) stir is set to intensify in Telangana as an umbrella organisation of various groups on Tuesday announced a series of protest activities.

United Muslim Action Committee (UMAC), comprising All India Majlis-e-Ittehadul Muslimeen (AIMIM), Jamaat-e-Islami and others chalked out an action plan to organize a rally, a protest meeting and human chain in Hyderabad this month.

The action plan was announced by Jamaat-e-Islami Telangana unit chief Hamid Mohammed Khan at a news conference in the presence of AIMIM president and Hyderabad MP Asaduddin Owaisi, leaders of various groups and religious scholars.

UMAC, which already oranised a massive protest meeting in Hyderabad and couple of towns in Telangana, announced that a mass rally will be organized on January 10 to demand revocation of CAA, a halt to NPR and dropping proposed NRC.

Tiranga Rally, to be attended by both men and women, will begin from historic Mir Alam Eidgah after Friday prayers and it will culminate at Shastripuram grounds.

This is expected to be the second biggest protest rally against CAA in Hyderabad after January 4 aMillion March’ attended by thousands of people.

He said all non-Muslims will be part of the protest programmes as they were aim was to save the country and the Constitution.

A public meeting will also be held at the historic Charminar on the night of January 25. There will also be ‘Mushaira’ in which leading poets will participate. At the stroke of midnight, national flag will be hoisted to mark the Republic Day.

UMAC announced that to mark Mahatma Gandhi’s death anniversary on January 30, a human chain will be formed from Bapu Ghat to Mohammedi Lines oil mill. Khan said this would be a silent protest.

“These are not programmes of one party or people of one religion. This is to save the Constitution, the soul of country, to pay homage to founding fathers and to ensure that their legacy is not destroyed,” said Owaisi.

On comments by BJP leaders that Muslims were using national flag and reciting national anthem due to CAA, the MP said they were belittling the protest. “It is a protest by all concerned citizens and not followers of a particular religion. It shows their arrogance and dictatorial attitude. They want to give it a communal colour.”

Reiterating the demand that Telangana government stay NPR process like Kerala government, Owaisi said they were sure that Chief Minister K. Chandrashekhar Rao would soon take a positive decision.