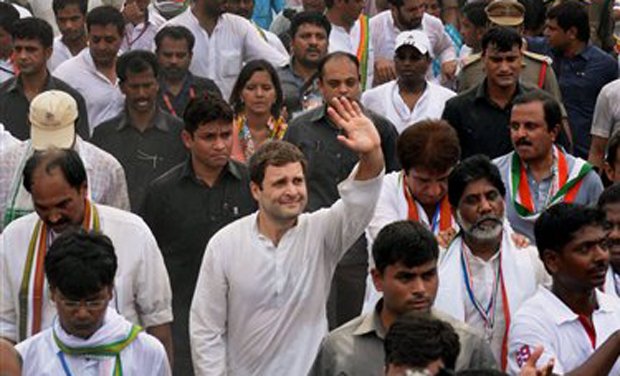 The defeat of the Bharatiya Janata Party in three major states – Madhya Pradesh, Rajasthan and Chhattisgarh – is certainly a big jolt to Prime Minister Narendra, who will be facing the general elections few months from now in his bid to return to power.

As results poured out on Tuesday, many BJP spokespersons repeatedly pointed out in television studio discussions that the elections in the three states and also Telengana and Mizoram were not a direct fight between Modi and Congress president Rahul Gandhi. But in reality, it indeed was a duel between them considering the number of rallies they addressed in the states.

The BJP’s campaign revolved around Rahul Gandhi’s “gotra” and building the Ram Temple. Modi also made a reference to “Congress’ widow” and talked about Nehru’s alleged follies in his rallies.

But people in the three states were aware of the real issues like farm crisis, unemployment, bad shape of the economy and rising oil prices pretty well and rightly voted the BJP out of power. They sent a strong message to the BJP: Roti is more important than Ram Temple.

The elections in the states also busts the perception of Modi’s invincibility so assiduously created by paid television media and demonstrates that he may have been turning from an asset to a liability for his party of late. Rallies, publicity razzmatazz and event management may work for some time but not always if pressing issues remain unaddressed for long. If the BJP, and also Modi, do not go for soul searching and course correction seriously addressing the people’s problems at the grassroots, they will be in for a bigger shock in 2019.

Though the Congress has consolidated its position in the Hindi heartland with the drubbing of the BJP, it has not much reason to be excited. The fact of the matter is that the discontentment at the ground against the incumbent BJP governments in the three states was so strong that political observers were hoping for a landslide victory for the Congress in each of them.

However the Congress bagged 101 assembly seats out of a total of 199 for which elections were held in Rajasthan and fell one short of the halfway mark of 115 in Madhya Pradesh. Its only convincing victory came from Chhattisgarh, the smallest of the three.

Nevertheless, defeating the BJP in the three states ruled by the latter, which also rules the Centre is no small achievement. The Congress however needs to improve its cadre base at the ground if it wants to turn disillusionment against the Modi government to votes for it in 2019 in the Hindi belt.

The BJP’s electoral loss may have thrown cold water on the “look east” strategy devised by Modi-Shah to capture power in states like Odisha and West Bengal. The national party’s hope of bigger Lok Sabha harvest from these two states to compensate the probable loss of seats in northern states in 2019 polls may not materialise after all. Regional forces like Trinamool Congress in West Bengal and Biju Janata Dal in Odisha are far better equipped politically and logistically than the Congress to take on the might of the BJP in their respective areas.

The results have already dampened the spirit of workers in the Odisha unit of BJP, which is acutely faction ridden as a result of para-dropping of leaders by the party high command. The workers now seem to perceive Shah’s “Mission 120” – winning 120 out of Odisha’s 147 assembly seats and thereby defeating the BJD – as a daydream. The party’s attack on the BJD government in the state have been lacking required teeth for a long time due to various political compulsions. Now many leaders leaving the party in the wake of poll defeat cannot be ruled out. Besides, the state unit has also been snapped of the much needed financial and logistic supply line from neighbouring Chhattisgarh, which now falls into Congress lap.

On the other hand, the Odisha unit of Congress, which had been losing the perception war to the BJP since the last four years despite being the state’s main opposition party, may hope to gain some political ground with the party’s resurgence in the assembly polls in Madhya Pradesh, Rajasthan and Chhattisgarh.

A stronger Congress is a strategic vantage point for the BJD, which has ruled Odisha for the past 18 years. And Odisha’s ruling party may not have any problem if the status quo of the Congress being the main opposition is maintained in 2019.