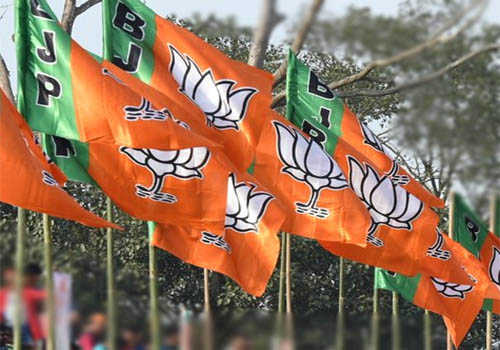 Is sidelining of BJP veterans linked to caste idiom?
It’s yet again ‘Mission 272 Plus’ but all may not look like the ‘wave’ of 2014 and there has been apprehension that things may derail.
In Uttar Pradesh and Bihar, the single biggest challenge is caste management. In eastern UP, the seats adjacent to Varanasi from where Prime Minister Narendra Modi is seeking re-election, both the development plank and Hindutva and hardcore neo-nationalism have their limitations.
BJP insiders say in seats like Azamgarh, Domiryaganj, Gorakhpur, Kushi Nagar, Deoria, Bansgaon, Lalganj, Ghazipur and Chandauli, voters’ mood is generally guided by caste factors.
Things seemed to have gone complicated a bit in terms of ‘caste management’ especially after the sidelining of party veterans such as Kalraj Mishra, Lalji Tandon and Murli Manohar Joshi.
Has a message gone down that Brahmins are being sidelined by the pro-Hindutva party?
In contrast, sources said there is a growing OBC domination as also the hegemony of the Thakur camp in some areas. Home minister Rajnath Singh, seeking his re-election from Lucknow, UP chief minister Yogi Adityanath and even minister of state for external affairs Gen (Retd) V.K. Singh reflect the dominance of ‘Thakurvad’.
In fact, adding to this facet, Jagdambika Pal, otherwise a turncoat from the Congress, has yet again been given the ticket from Domariyaganj.
In UP post-Mandal era ‘caste management’ by the BJP saw emergence of Kalyan Singh as a key player in the state. Singh, now Rajasthan governor, belongs to OBC block and so does Uma Bharati, who incidentally also has stayed away from electoral contest this time.
Narendra Modi, Varanasi’s sitting MP, is also an OBC though largely he is seen as the Hindutva leader, a hardcore nationalist and a catalyst of development. Whether Modi’s OBC tag helps him electorally is only a matter of debate.
Sushma Swaraj, who opted out from electoral contest on health ground, is a Brahmin.
Thus, when M M Joshi – directly or indirectly – sounded his displeasure the manner he was denied ticket from Kanpur, the refrain in a certain section was that he was fighting a Brahmin cause.
Arun Jaitley too is a Brahmin, but his time-tested friendship with PM Modi and ‘team-manship’ with Modi-Amit Shah duo makes him ‘indispensable’ to the camp.
Another top Brahmin leader Nitin Gadkari seemed to have survived all that machination is largely due to his proximity to the RSS leadership.
However, it is altogether a different matter that the Union surface transport and road minister has always made light of his RSS connections.
In Bihar too, the Brahmin leaders like Ashwini Choubey are restive at times as the party ‘compromised’ a lot in accommodating allies like LJP of Dalit leader Ram Vilas Paswan and Nitish Kumar-led JD(U).
Besides the caste games, comes the ground zero polity. “Team Modi’s worst fear is that the theory that the Congress is in tatters and gave up fight might not work in UP, Maharashtra, Gujarat, Rajasthan and Madhya Pradesh. If Congress improves its tally, we should not be surprised if they do well in these states,” said a party source.
The caste puzzle is actually a pain. A recent survey by a media house revealed that every parliamentary constituency in UP has more than 40 per cent Muslim-Yadav-Dalit population and in at least 47 constituencies, the Muslim-Yadav-Dalit sections of electorate are higher than 50 per cent.

In Prime Minister’s constituency of Varanasi too, the caste matters.
Sources said Varanasi Lok Sabha segment makes an interesting composition of over 3.8 Vaishyas (trading community), 2.6 lakh Brahmins and 1.7 lakh Yadavs. The BJP is confident of winning Kurmi support once again, thanks to Apna Dal alliance. Various local leaders have been deployed to win 1.30 lakh Bhumihars.
In Maharajganj – not far from Nepal border – there is story about Muslims having made rags to riches stories and BJP would be keen to retain it yet again and fielded sitting MP Pankaj Chaudhary as its candidate.
In fact, BJP is largely banking on sitting MPs in the region – namely – Kamalesh Paswan from Bansgaon, Harish Dwivedi from Basti, Manoj Sinha from Ghazipur, and Daddan Mishra from Shrawasti constituency. (UNI)