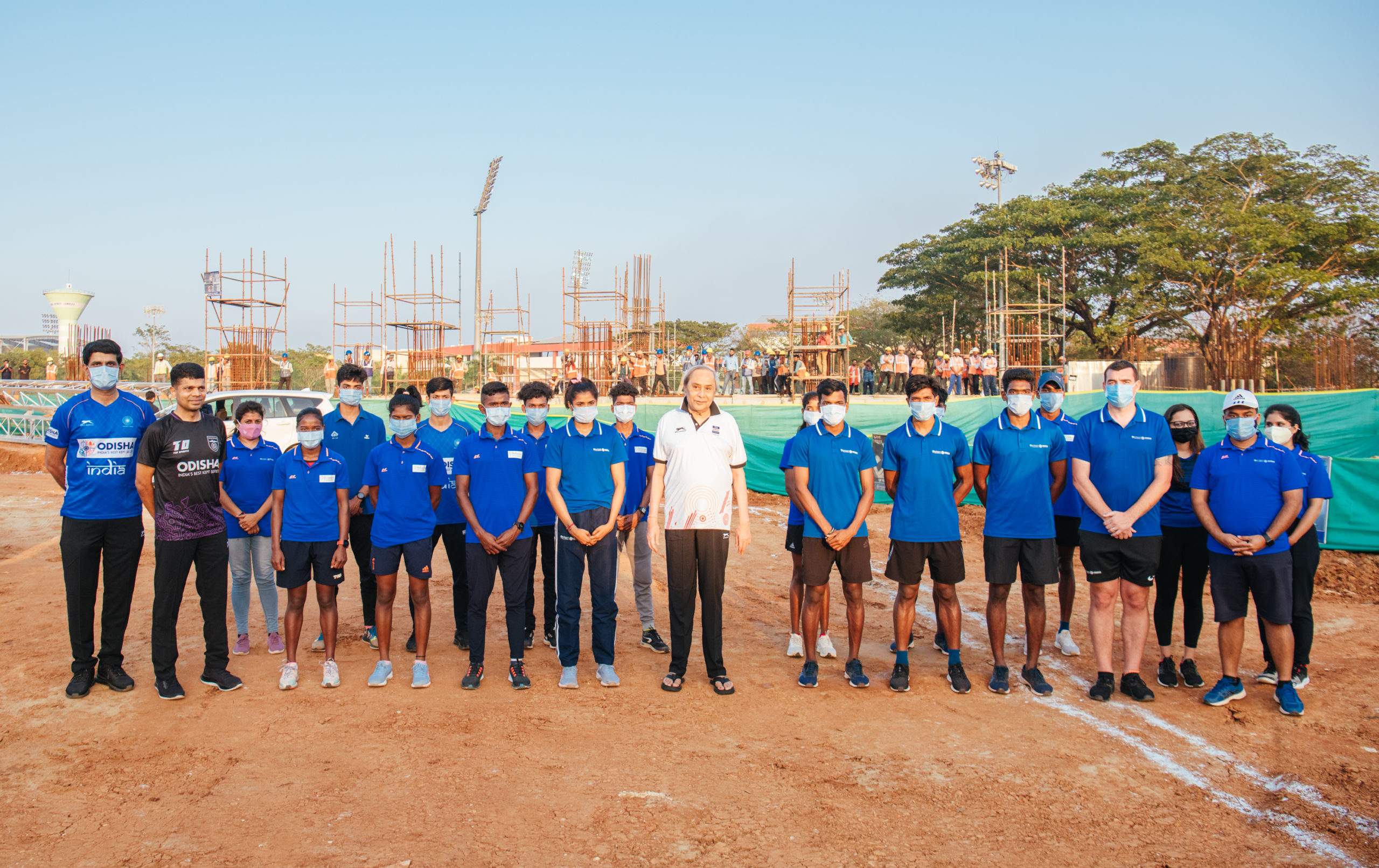 Bhubaneswar: Odisha Chief Minister Naveen Patnaik interacted with athletes from the Reliance Foundation Odisha Athletics High Performance Centre (HPC) during his recent visit to the Kalinga stadium to inspect the progress of the ongoing construction of the indoor track facility.

The HPC, a collaborative effort of the Odisha Government and Reliance Foundation, began operations in 2019 and 50 athletes are currently training at the Centre. Patnaik expressed the hope that the indoor facility will be “major boost for the development of athletics in India and will become a hub to create champions in the coming years” and wished athletes from the HPC the very best for the future.

“Our partnership with RF is one of common vision,” said R Vineel Krishna, Secretary Sports, Odisha. “To take the sport of Athletics to greater level and this Indoor Athletic Centre will play a key role towards realising our collective dream of winning more medals in Athletics for the country. We are sure this facility, a first of its kind, will benefit our young HPC athletes to transition to international level. Each one here has the potential to excel and bring laurels for the state and country.”

“Without the vision of the CM Naveen Patnaik there would likely be no Athletics HPC and we certainly would not be looking forward to India’s first state of the art indoor track facility at the Kalinga Stadium Complex,” said James Hillier, Head Coach at the Reliance Foundation Odisha Athletics HPC.  “We are grateful for his sporting vision and we are honoured that for the last 3 years, in partnership with the Odisha government, we have developed the best and most innovative athletics training facility in the country. We at Reliance Foundation work closely with public stakeholders to create sustainable and long lasting impact on the athletics ecosystem.”

“It was extremely inspirational for our athletes to get to meet the honourable CM Naveen Patnaik in person,” Hillier added. “He wished the athletes the best for their training in the future.  He also praised the workers who are working around the clock to get our new indoor facility finished before the end of the year.”

Several athletes from the HPC have already produced eye catching performances at National level competitions. 23-year old Amlan Borgohain, among the first batch of recruits, won Gold in the 200m and Silver in the 100m, with Personal Best timings of 20.75 seconds and 10.34 seconds respectively at the Open Nationals in Warangal last year. 20-year old High Jumper Swadhin Kumar Majhi, from Angul, recorded a Personal Best of 2.08 metres to win a bronze medal at the All India Inter-University Athletics Championship for Men in Mangalore earlier in the year.

16-year old Sabita Toppo, who hails from Sundergarh and has been identified as one of the brightest young prospects at the HPC, won gold in the U-16 girls Long Jump and silver in the U-16 girls 80m hurdles at the Junior Nationals in Guwahati last year. Words of encouragement from the Chief Minister during his visit has come as a shot in the arm for these athletes as they seek to build on their progress.

“I am beyond happy for the new indoor facility to come up as it will benefit me immensely as a jumper,” said Majhi. “It will help me practice under all weather conditions. So very grateful to our CM Shri Naveen Patnaik for being able to give us access to the best facilities.”

“I had never imagined that there will be an indoor facility in India and I would be one of the first athletes to experience it so this is a matter of pride,” added Toppo. “We are watching it build in front of our eyes every day and cannot wait for the facility to be ready. A hearty thank you to Shri Naveen Patnaik sir for giving us this opportunity.”

Hillier and his team are currently in competition preparation phase at the HPC with training focused on modifying key motor skills such as speed, endurance and strength.  These skills have been developed and harnessed over the past sixteen weeks which has constituted a general and specific preparation period.

Several female athletes from the HPC are currently competing at the All India University Athletics Competition. Over the next six weeks, competitions such as the National Jumps Championships, the Indian Grand Prix and the Federation Cup will feature athletes from the HPC, where they hope to stake a strong claim for national team spots for the Commonwealth and Asian Games later in the year.