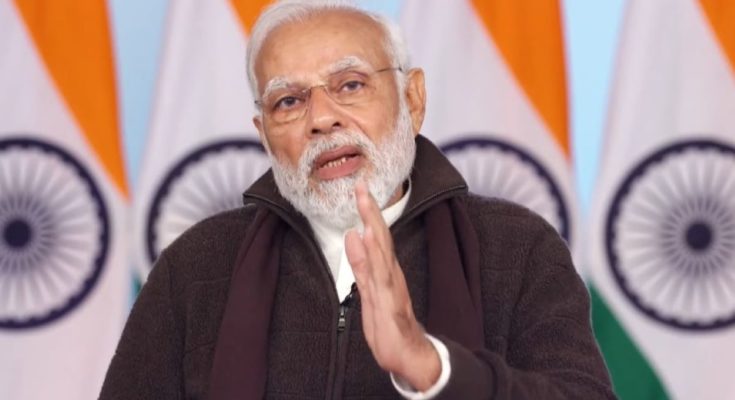 New Delhi: The Prime Minister, Shri Narendra Modi addressed the 1st All India Annual State Ministers’ Conference on Water via video message today. The theme of the conference is ‘Water Vision @ 2047’ and the objective of the forum is to bring together key policymakers for discussions on ways to harness water resources for sustainable development and human development.

Addressing the gathering, the Prime Minister highlighted the importance of the first All India Conference of Water Ministers of the country by shining the light on the unprecedented work done by India in areas of water security. The Prime Minister pointed out that in our constitutional system, the subject of water comes under the control of the states and it is the states\’ efforts for water conservation that will go a long way in achieving the collective goals of the country. “Water Vision @ 2047 is an important dimension of the journey of Amrit Kaal for the next 25 years”, the Prime Minister remarked.

Reiterating his vision of ‘whole of government’ and ‘whole of country’ the Prime Minister emphasised that all governments should work like a system wherein there should be constant interaction and dialogue between different ministries of state governments, such as the Ministry of Water, Ministry of Irrigation, Ministry of Agriculture, Ministry of Rural and Urban Development and disaster management. He further added that planning will get help if these departments have information and data related to each other.

The Prime Minister gave the example of Swachh Bharat Abhiyan and said, “When people joined the Swachh Bharat Abhiyan, a consciousness was awakened in the public as well.” Crediting the people of India for their efforts, the Prime Minister mentioned that the government took up many initiatives, be it collecting resources to remove filth, building various water treatment plants or constructing toilets, but the success of this campaign was ensured when the public decided that there should be no dirt at all. The Prime Minister emphasised the need to inculcate this idea of public participation towards water conservation and highlighted the impact that awareness can create.

The Prime Minister suggested, “We can organise ‘Water Awareness Festivals’ or an event related to water awareness can be added to the fairs held at the local level.” He stressed the need to make the younger generations aware of this subject through innovative ways from curriculum to activities in schools.

The Prime Minister informed that the country is constructing 75 Amrit Sarovar in every district wherein 25 thousand Amrit Sarovars have already been built so far. He emphasised the need to connect technology, industry, and startups to identify problems and find solutions and mentioned technologies like geo-sensing and geo-mapping that can be of great help. He also stressed the need to come up with government policies and bureaucratic procedures to tackle water-related issues at the policy levels.

Highlighting the success of ‘Jal Jeevan Mission’ as a major development parameter for a state to provide water to every household, the Prime Minister remarked that many states have done a good job while many states are moving forward in this direction. He recommended that once this system is in place we should ensure its maintenance in the same way in the future.

He proposed that Gram Panchayats should lead the Jal Jeevan Mission, and after the work is completed, they should also certify that sufficient and clean water has been made available. “Every Gram Panchayat can also submit a monthly or quarterly report online stating the number of houses that are getting tap water in the village.” He also added that a system of periodic water testing should also be developed to ensure the quality of water.

The Prime Minister also asked states to adopt ways where the water budget is prepared at the Panchayat level based on how much water is required in which village and what work can be done for it. Highlighting the success of the ‘Catch the Rain’ campaign, the Prime Minister reiterated that such campaigns should become an essential part of the State Government where they should be evaluated annually. “Instead of waiting for the rains, all the planning needs to be done before the rains”, he added.

“Our rivers, our water bodies are the most important part of the entire water ecosystem”, the Prime Minister said as he emphasised creating a network of waste management and sewage treatment in every state. “By making the Namami Gange Mission a template, other states can also start similar campaigns for the conservation of rivers. It is the responsibility of every state to make water a subject of cooperation and coordination”, the Prime Minister concluded.

Ministers of Water Resources from all states attended the 1st All India Annual State Ministers’ Conference on Water.