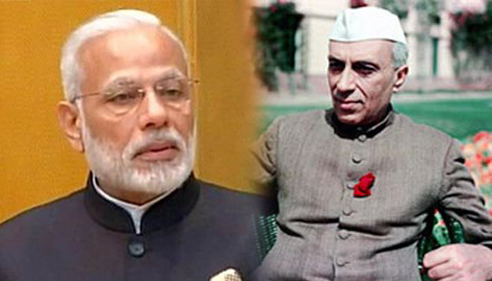 I have been noticing that some new and overenthusiastic supporters of Prime Minister Narendra Modi have been making fatuous comparisons between him and India’s first prime minister Jawaharlal Nehru. Well, there is an old saying: Naye Musalman pyaz zyada khate hain. New converts must prove a point.

I am not the best person to enumerate the plus points and greatness, such as it is, of Modi. As for any comparison with Pandit Nehru, I think even the thought is a sign of dementia. I will bring out just one major point.

Nehru took over the reins of the country when India was at rock bottom. Those of us who lived through the fifties know that India, after the holocaust of Partition and the British withdrawal in cynical mendacity, was totally rudderless.

Everything in a new and modern India had to be built from the scratch. It was in that scenario that Nehru gave a vision and a direction to India and to Indians who were bewildered by past slavery, faint collective memories of ancient glory, and the challenges of the new post war modern world.

Jawaharlal Nehru was human and made mistakes and had weaknesses. All men do. But he did put the country on the path to modernity. This was his most important legacy.

He had the vision to show people the way. The leaders who came later did what they could. The almost forgotten Lal Bahadur Shastri, to my mind, was another great Indian who showed a unique vision of Indianness. The others, including our leaders of today, do not show the way. They let the mobs and the sheep show the way.

This is the huge difference.

If you just give the people what they want, they will only want and get what their selfish, limited and religion obsessed minds can think of. Great leaders have to make people realise what should they want in tune with internationalism and humanitarian values.

We are far away from that vision now.

(Shankar is a veteran journalist and writer based in New Delhi)