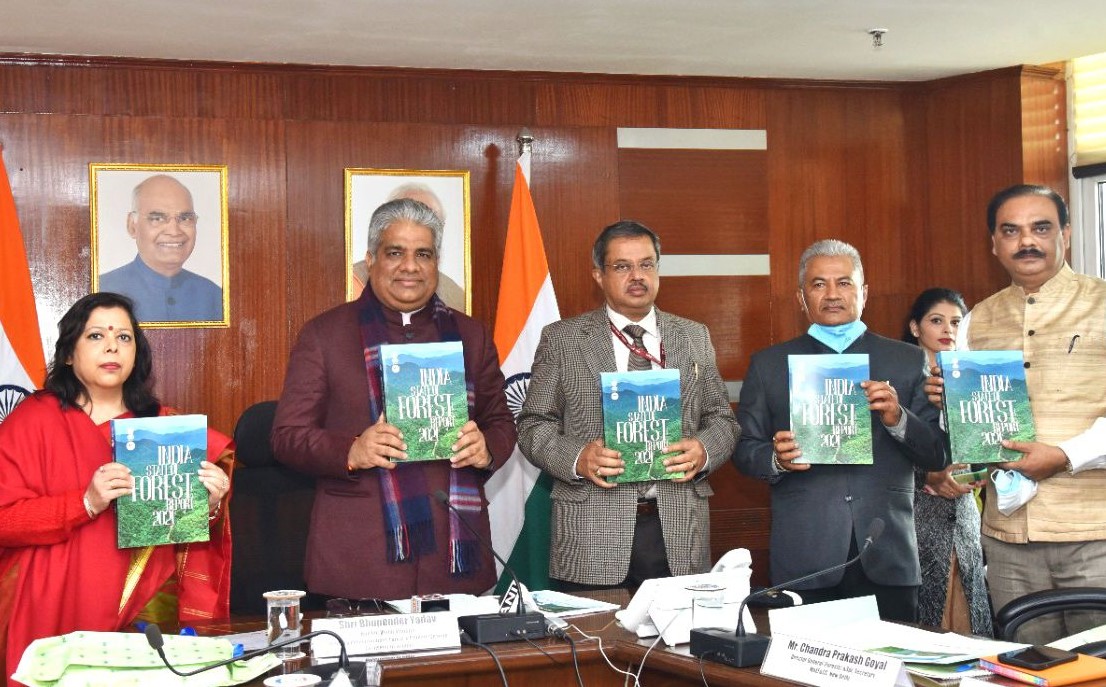 New Delhi: Minister for Environment, Forest and Climate Change, Bhupender Yadav, today released the ‘India State of Forest Report 2021’ prepared by the Forest Survey of India (FSI) which has been mandated to assess the forest and tree resources of the country.

The Minister expressed happiness over the fact that the present assessment reveals that 17 states/UT’s have above 33 percent of the geographical area under forest cover and stated that the focus of the government under the leadership of Prime Minister Shri Narendra Modi is not just to conserve the forests quantitatively but to enrich it qualitatively.

Area-wise Madhya Pradesh has the largest forest cover in the country followed by Arunachal Pradesh, Chhattisgarh, Odisha and Maharashtra. In terms of forest cover as percentage of total geographical area, the top five States are Mizoram (84.53%), Arunachal Pradesh (79.33%), Meghalaya (76.00%), Manipur (74.34%) and Nagaland (73.90%).

Total mangrove cover in the country is 4,992 sq km. An increase of 17 sq Km in mangrove cover has been observed as compared to the previous assessment of 2019. Top three states showing mangrove cover increase are Odisha (8 sq km) followed by Maharashtra (4 sq km) and Karnataka (3 sq km).

In tune with the Government of India’s vision of digital India and the need for integration of digital data sets, FSI has adopted using the vector boundary layers of various administrative units upto districts level as provided by Survey of India along with digital open series topo sheets, in order to ensure comprehensive compatibility with the geographical areas as reported in Census, 2011.

Satellite data for the entire country was procured from NRSC for the period October to December 2019. The satellite data interpretation is followed by rigorous ground truthing. Information from other collateral sources are also used to improve the accuracy of the interpreted image.

In the present ISFR 2021, FSI has included a new chapter related to the assessment of forest cover in the Tiger Reserves, Corridors and Lion conservation area of India. In this context, the decadal assessment of change in forest cover within Tiger Reserves, Corridors and Lion conservation area helps in assessing the impact of conservation measures and management interventions that have been implemented over the years.

A new initiative of FSI has also been documented in the form of a chapter, where the ‘Above Ground Biomass’ has been estimated. FSI, in collaboration with Space Application Centre (SAC), ISRO, Ahmedabad, initiated a special study for estimation of Above Ground Biomass (AGB) at pan-India level, using L- band of Synthetic Aperture Radar (SAR) data. The results for the States of Assam and Odisha (as well as AGB maps), were presented earlier in ISFR 2019. The interim results for AGB estimates (and AGB maps) for the entire country are being presented as a new chapter in ISFR 2021. The detailed report will be published after completion of the study.

FSI in collaboration of with Birla Institute of Technology & Science (BITS) Pilani, Goa Campus has performed a study based on ‘Mapping of Climate Change Hotspots in Indian Forests’. The collaborative study was carried out with the objective to map the climatic hotspots over the forest cover in India, using computer model-based projection of temperature and rainfall data, for the three future time periods i.e. year 2030, 2050 and 2085.

The report also contains information on various parameters States and UT wise. Special thematic information on forest cover such as hill, tribal districts, and north eastern region has also been given separately in the report.

It is expected that the information given in the report would provide valuable information for policy, planning and sustainable management of forest and tree resources in the country.