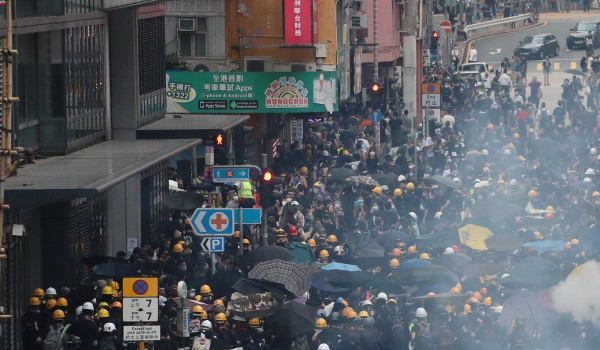 EU foreign policy chief Federica Mogherini expressed concern over violence that erupted during anti-government protests in Hong Kong and outlined the need for dialogue and restraint to settle the crisis.

China’s special administrative region has been engulfed in the protests against amendments to the extradition legislation. Though the legislation has still been abandoned, the protesters continue rallying against police violence. Law enforcers maintain that they use force proportionately and only in response to violent acts or unlawful behavior by the protesters, despite the protesters’ claims to the contrary.

Beijing views the situation in Hong Kong as a result of foreign interference in China’s domestic affairs and expresses full support for the actions of the local authorities. On Wednesday, tensions escalated in the area of Tsuen Wan where protesters attacked a police station with Molotov cocktails, while the police used tear gas to disperse them.

“The escalation of violence and continuing unrest in Hong Kong, including the use of live ammunition, resulting in critical injuries to at least one person, are deeply troubling. The European Union maintains its position that restraint, de-escalation and dialogue are the only way forward. Indeed, they are clearly needed now more than ever and offer the only basis for an enduring solution,” Mogherini said in a statement issued by European External Action Service late on Wednesday.

The statement called for fundamental human rights and freedoms to be upheld amid escalation in Hong Kong and outlined the need to take action to restore trust between the authorities and the public. The European Union also welcomed the Hong Kong government’s recent call for dialogue.

“The European Union recalls its close relations with Hong Kong under the ‘one country, two systems’ principle and its strong stake in its continued stability and prosperity. The EU attaches great importance to Hong Kong’s high degree of autonomy, which must be preserved in line with the Basic Law and international commitments. Continued respect for fundamental rights and freedoms, and the independence of the judiciary, remain essential for the development of Hong Kong,” the statement pointed out.

The Hong Kong demonstrators have been demanding universal suffrage, an end to legal procedures against fellow demonstrators and an investigation into alleged police violence, among other things. The Hong Kong government, in turn, has repeatedly condemned the illegal acts committed by the protesters during their demonstrations.  (UNI)