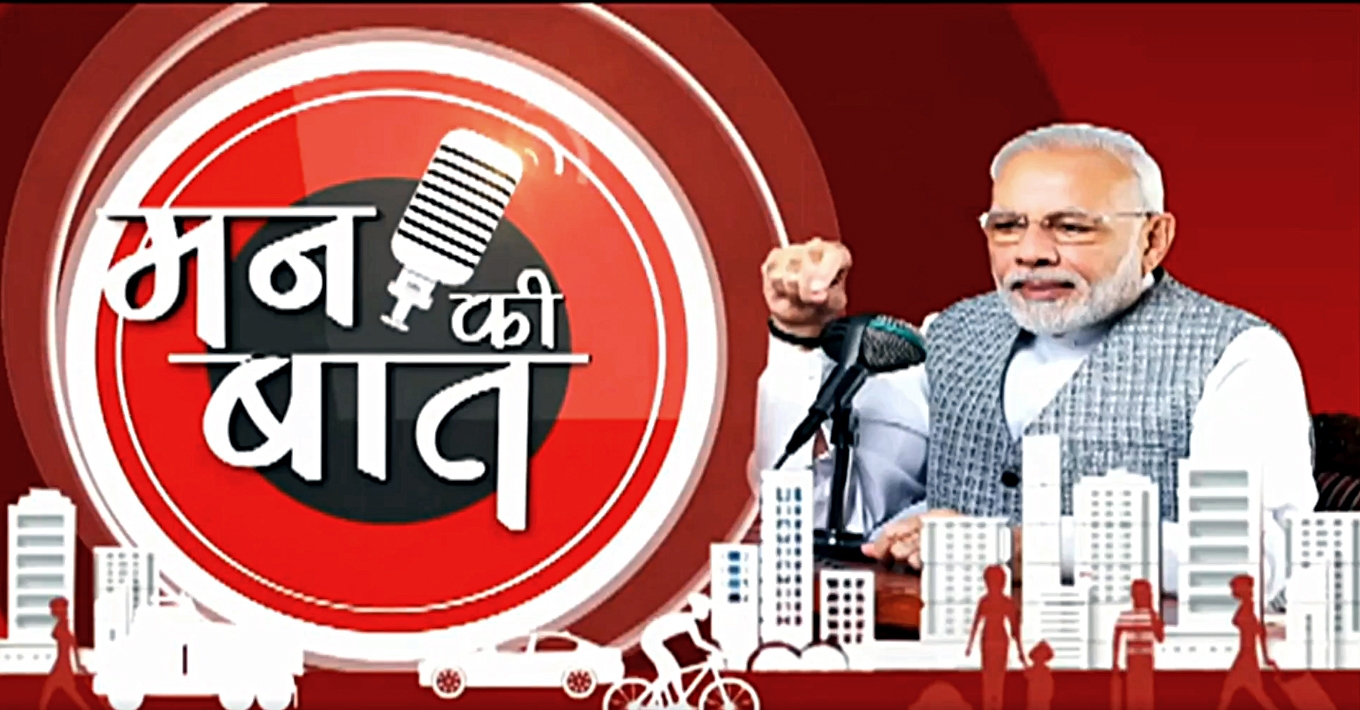 New Delhi: Prime Minister Narendra Modi today said India is fighting the new wave of COVID with great success. Addressing the nation in his Mann Ki Baat programme on All India Radio, Modi said it is a matter of pride that about four and a half crore children have been administered vaccine doses till now.

He said about 60 percent of youth in the age group of 15 to 18 years have been vaccinated within just three to four weeks. He stressed that this will not only protect the youth but also help them to continue with their studies.

Mr Modi highlighted that within 20 days, one crore people have taken the precautionary dose as well. He termed people’s trust on indigenous vaccine as the country’s strength. He called the reduction of COVID cases as a positive sign. He however cautioned people to be safe, and added that the pace of economic activities of the country should be maintained.

Prime Minister said a digital sculpture of Netaji has also been installed at India Gate and thanked people for welcoming this with enthusiasm. He added that in the Azadi Ka Amrit Mahotsav, India is re-establishing its national symbols through these efforts.

Modi said that some former soldiers have written to him saying that the Amar Jawan Jyoti is a symbol of the immortality of the martyrs. He said that just like Amar Jawan Jyoti, the country’s martyrs, their inspiration and contribution are also immortal. He urged everyone to visit the National War Memorial to get a different energy and inspiration.

Prime Minister Modi said that many important national awards were also given away recently. One of them is Pradhan Mantri Rashtriya Baal Puraskar.

These awards are given to children who have rendered courageous and inspirational work at a young age. He said the brave deeds of these children must be highlighted as other children will get inspiration and enthusiasm to bring glory to the country.

Padma awards have also been announced recently. Mr Modi said there are many recipients of Padma awards about whom very few people know. He called them the unsung heroes who have done extraordinary deeds in ordinary circumstances. He gave the example of Basanti Devi of Uttarakhand, who has been honored with Padma Shri.

Her husband died at an early age and she had to live in an ashram. Staying there, she fought to save the river and made an extraordinary contribution to the environment.

The Prime Minister also cited the example of 77 year-old Lorembam Beino Devi of Manipur who has been conserving the Liba textile art of Manipur for decades. She has also been awarded the Padma Shri. The Prime Minister also spoke of Arjun Singh of Madhya Pradesh who has received Padma award for imparting recognition to the art of Baiga tribal dance.

Another person to receive the Padma award is Amai Mahalinga Naik who is a farmer from Karnataka. Some people also call him Tunnel Man. Mr Modi exclaimed that he has made surprising innovations in agriculture.

The Prime Minister expressed delight that more than one crore children have written to him through Mann Ki Baat postcards. These post cards have come from different parts of the country as well as abroad. He stated that these postcards show how broad and wide the vision of the new generation is for the future of the country.

Mr Modi shared some postcards for the listeners of Mann Ki Baat. Riddhima Swargiyari from Guwahati, Assam wrote that she wants to see an India in the 100th year of independence which is the cleanest in the world, and completely free of terrorism.

In her postcard, Navya Verma of Prayagraj, Uttar Pradesh said her dream for 2047 is of an India where everyone has a dignified life, farmers are prosperous and there is no corruption. Mr Modi said the country is rapidly moving in this direction.

He said one should not wait for corruption-free India till 2047. Mohammed Ibrahim from Chennai said in his postcard that he wants to see India as a major power in the field of defence in 2047 and have its own research base on the Moon.

Bhavna, a class 10 student of Saraswati Vidya Mandir in Raisen, Madhya Pradesh wrote about revolutionary Shirish Kumar. Laurencio Pereira’s postcard from Goa mentioned that Bhikaji Cama was one of the bravest women involved in the Indian freedom struggle.

The Prime Minister emphasised that the enthusiasm of India’s Azaadi ka Amrit Mahotsav is not limited to the country. He received 75 postcards from Croatia. Students of the School of Applied Arts and Design in Zagreb, Croatia have sent 75 cards to the people of India and congratulated them on the Amrit Mahotsav. Mr Modi thanked Croatia and her people on behalf of all countrymen.

The Prime Minister stated that India has been the sacred land of education and knowledge. He said great personalities of the country have also had a deep relationship with education. He elaborated that Pandit Madan Mohan Malaviya founded the Banaras Hindu University, and Mahatma Gandhi played an important role in the establishment of Gujarat Vidyapeeth.

Mr Modi said that on the insistence of Sardar Patel, two of his associates, Bhai Kaka and Bhikha Bhai, established education centres for the youth in Gujarat’s Vallabh Vidyanagar. He also mentioned Gurudev Rabindranath Tagore who established Shantiniketan in West Bengal.

Maharaja Gaikwad was also one of the ardent supporters of education who built many educational institutions and inspired many personalities including Dr. BR Ambedkar and Shri Aurobindo for higher education. Mr Modi also remembered Raja Mahendra Pratap Singh who handed over his house for the establishment of a technical school.

He gave a lot of financial help for the construction of education centers in Aligarh and Mathura. Mr Modi said that he also had the privilege of laying the foundation stone of a university in Raja Mahendra Pratap Singh’s name in Aligarh.

He expressed happiness that awareness about education is visible at every level in society. Mr Modi gave the example of Taimmal ji living in Udumalpet block of Trippur district of Tamil Nadu.

Taimmal ji, who made a living by selling coconut water, left no stone unturned to educate his son and daughter. His children studied in Chinnaveerampatti Panchayat Union Middle School. Mr Modi expressed awe that he even donated one lakh rupees to the school. He also spoke of Jai Chaudhary, an alumnus of IIT BHU, who donated one million dollars to IIT BHU Foundation.

The Prime Minister said there is no dearth of such inspiring examples in Central Universities as well. He said that to further enhance such efforts,  Vidyanjali Abhiyan has also been started from September last year. Its objective is to improve the quality of education in schools across the country with the participation of various organizations, CSR and private sector. Vidyanjali is furthering the spirit of community participation and ownership.

Mr Modi highlighted that love for nature and compassion for every living being is part of Indian culture. He said a glimpse of this was seen recently when a tigress died in Pench Tiger Reserve of Madhya Pradesh. The Forest Department had named it T-15. He said the death of this tigress made people very emotional and they even performed her last rites. Mr Modi said this love of Indians for nature and living beings was greatly appreciated the world over.

The collared tigress gave birth to 29 cubs in her lifetime and raised 25 of them to maturity. He said a similar sight was seen this time in the Republic Day parade.

The charger mount of the President’s Bodyguard, Virat took part in his last parade.

Virat had came to Rashtrapati Bhavan in 2003 and used to lead the parade every year as Commandant Charger. Even when a foreign ead of State was welcomed in Rashtrapati Bhavan, Virat used to play this role. On Army Day, Virat was also given COAS Commendation Card by the Army Chief.

The Prime Minister said results follow when there is sincere effort with noble intention. He said a great example of this has emerged from Assam. The one-horned rhino has always been a part of Assamese culture. Mr Modi remembered a song of Bharat Ratna Bhupen Hazarika which praises the lush green surroundings of Kaziranga and its wildlife. He said rhino poaching affects Kaziranga and 37 rhinos were killed in 2013 and 32 in 2014 by poachers.

To tackle this challenge, a huge campaign against the poaching of rhinoceros was launched in the last seven years with the special efforts of the Assam government.

On the 22nd of September last year, on the occasion of World Rhino Day, more than 2400 horns seized from smugglers were burnt. Mr Modi said this was a stern message to the poachers and a steady decline is now being seen in the poaching of rhinos in Assam.

The Prime Minister spoke about the popularity of Indian culture and said it is a big attraction in Latin America and South America. He elaborated how Indian culture is making its mark in Argentina. In 2018, during his visit to Argentina, Mr Modi participated in a yoga program -Yoga for Peace. He said there is an organization in Argentina called Hastinapur Foundation which is involved in the propagation of Indian Vedic traditions in Argentina. It was founded 40 years ago by Professor Aida Albrecht who is going to turn 90 years old.

Mr Modi also spoke of Thounaojam Niranjoy Singh, a 24-year-old youth in Manipur, who made a record of 109 push-ups in a minute. He asked people to be inspired by him and make physical fitness a part of your life. He also stated that Ladakh will soon be blessed with an impressive Open Synthetic Track and Astro Turf Football Stadium.

This stadium is being built at a height of more than 10 thousand feet and its construction is going to be completed soon.

Lastly, the Prime Minister urged people to not use Single Use Plastic and go Vocal for Local. He also reminded everyone to work wholeheartedly for the Atma Nirbhar Bharat campaign.