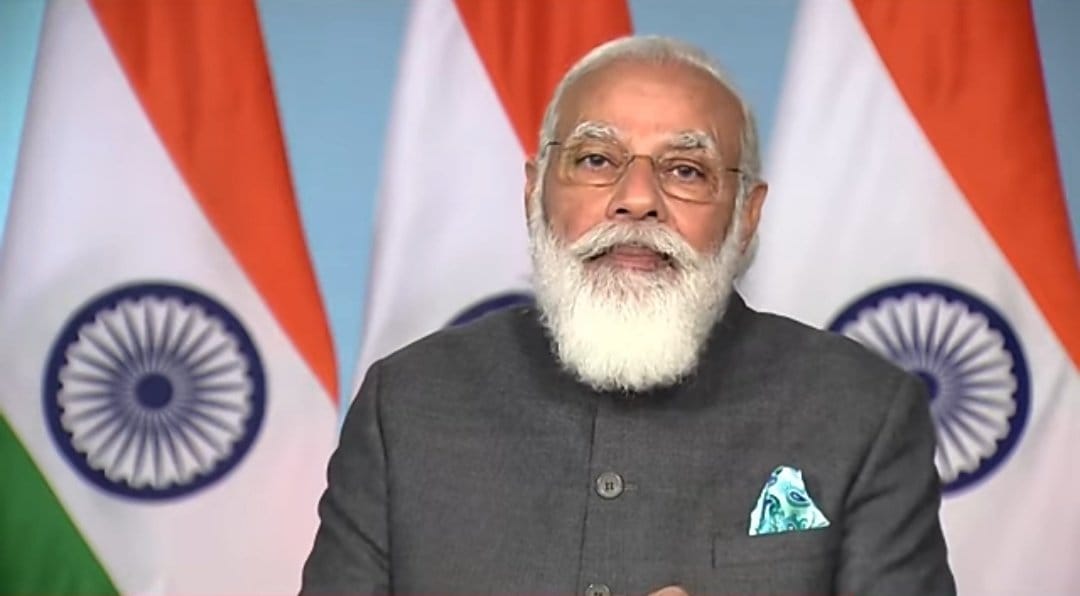 New Delhi: Prime Minister Narendra Modi today asserted in the Lok Sabha that India under the NDA rule is moving forward as the fastest developing economy in the world despite the Covid-19 pandemic.

He replied to the discussion on the motion of thanks to the President’s address this evening. Mr Modi said, India is the biggest emerging economy. He listed out that India is attracting record Foreign Direct Investments. He said, India is now among the five topmost countries in generating renewable energy. He urged all the political leaders and the people by rising above party lines to resolve to make the country self-reliant.

The Prime Minister said, when the world has been sceptical about India’s ability to face the Covid-19 pandemic, the country presented a model to the world in tackling the pandemic with its own vaccines. He said, almost a hundred percent of the eligible population have got at least a single dose of the vaccine and 80 per cent have had both doses.

Modi said, despite the challenges posed by the Covid-19 pandemic, the supply of fertilizers to the farmers has been ensured by the Centre. He reiterated that the farmers achieved record food-grains production thanks to the Government’s effective interventions during the pandemic.

He said, the small farmers’ interests are being taken care of by the Government, adding, if they are made stronger, the rural economy will also get strengthened. He criticized that those who are away from the country’s grassroots cannot understand the pain of the farmers and said they are hurting the sentiments of the small farmers.

The Prime Minister charged the Opposition with triggering the migrant labourers in Mumbai to move to their native places, though lockdown was in force to keep them indoors. He said, their movement contributed to mass spreading of the pandemic across many states.

He also blamed the parties in Delhi for asking those labourers in the hutments to go back to their native villages, against the lockdown norms. He said, Yoga has proved to be beneficial to tackle Covid-19 pandemic. However, he said, the Opposition failed to promote yoga during the pandemic. He also said, the Opposition politicized the Government’s handling of Covid pandemic.

Prime Minister Modi said, the Make in India initiative has met with resounding success. He said, the budget has made provisions for promoting self-reliance in defence manufacturing, adding, India is becoming a major exporter of defence products. He said India suffered earlier under the UPA Government due to indecision in procurement of defence equipment leading to inordinate delays. He remarked that by the time a decision was taken the equipment became obsolete. He however added that, at present, the procurement process has been simplified.

The Prime Minister said just like the changed world order after World War-Two, the post-Covid situation has also changed drastically, throwing up various opportunities to India. He said the global supply chain has gotten altered. He added that India would take advantage of the changing situation to the maximum to benefit the country.

Prime Minister Modi said the Start-Up India initiative has led India to become the third most successful country in nourishing start-up’s. He said, during the UPA Government there were only about 500 start-up’s but 7000 start up’s have been established in the last seven years. He added, many such start-up’s have become unicorns, and expressed confidence that very soon, such unicorns based in India would cross the figure of a century. He also said many of them are poised to become Multinational Companies.

The Prime Minister discredited all the criticisms against the Make in India initiative saying, the MSME is being benefited by the Government’s financial packages. The Centre’s three-crore rupees package has helped over 13.5 lakh MSME units, saving about 1.5 crore jobs, he said.

On inflation, Prime Minister Modi said it was in double digits during the second term of the UPA Government which has been brought down by the NDA Government. He said, the food inflation is now under three percent. He said India is witnessing unprecedented growth in infrastructure including rural roads, National Highways and airports and drones.

Modi called upon the youth to make use of the opportunities that are made available in the fields like space, drones and defence. He said, six lakh villages are being connected with fibre optic cables. He also said exports during the pandemic witnessed phenomenal growth, adding the exports in agricultural products and mobile phones reached new levels.

Without mentioning the Congress party’s name, Prime Minister Modi said it has been thrown out of power from Odisha after 1995, from Goa after 1994, from Nagaland after 1998, from Tripura after 1988, from West Bengal after 1972, and from Tamil Nadu after 1962. He said though Telangana has been created by its Government, the party was rejected by the people of the state. However, he said the party is still living in the mentality of 2014 when they lost power at the centre. He said, it cannot come back to power with this mentality even after a hundred years.

Modi said criticism is necessary for an active, vibrant democracy, adding, blind opposition is not constructive. At one point in time, when the Opposition created noisy scenes, Speaker Om Birla said, ample time has been given to all the members to speak during the debate, adding, raising noises when the Prime Minister replies would lower the dignity of the House. Prime Minister Modi also said, interventions are sometimes required, but when it crosses the limit, it will belittle the House.

Prime Minister Modi quoted the Tamil poet Subramania Bharathi saying despite the diversities, India remains one. He said some people dodge the House after making sweeping statements on its floor, without hearing his reply. Mr Modi said, that Congress has claimed that its government pulled out 17-crore people from poverty, which he said is a tweaked figure.