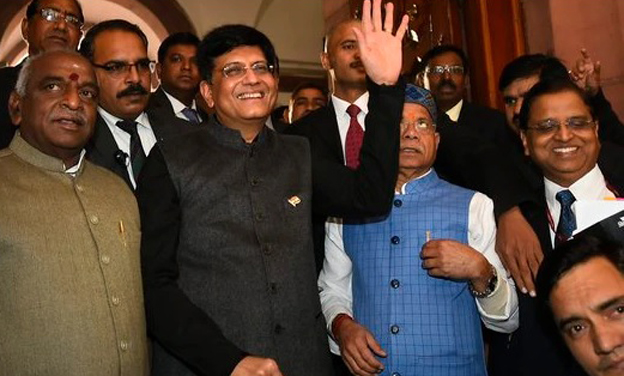 It was a typical middle class budget that risks a fiscal slippage, which may ultimately lead to a great down slide in times to come. Scripted carefully to counter the Congress-spearheaded pro-farmer policies like waiver of farm loans, the provisions earmarked for the farming sector is a step taken in panic.

But, the  purported magnanimity shown  by allocating Rs.6,000 to farmers is indeed a laughable succour. Which gives Rs.500 per month a farmer, is something that  is being ridiculed as a cruel joke.

In any political sloganeering time the Indian middle class has played the crucial role pandering to the upper class (read politicians) whims and to hoodwink the lower class that comprises the vote bank.

It reminds the anecdote when once Hitler was described walking to the parliament while plucking the feathers of a chicken he was holding. The bird was without a single feather by the time Hitler reached the floor of the house. Hitler spread some grains on the floor and the featherless bird started picking the grains and followed Hitler as he walked around. Explaining about his strange act to the perplexed house Hitler said, “This is what happens in politics”. The leaders deprive the common man of everything and leave him so weak, like this chicken, that whatever the leaders throw at them they accept it as a great favour.

And the most attractive feature of the Budget, now being discussed, is the tax relief up to Rs.5 lakh, which is seen as one of the most pro-middle-class bait.

It would be too early to read into it as a ‘vission document’ for 2030 , but it is a simple model aimed at damage control necessitated mainly after the disasters faced by the Bharatiya Janata Party in three Hindi heartland states during last assembly polls.

However, the government has conveniently forgotten one of its major planks of 2014: Employment.  It was promised in 2014 to create two crore jobs each year. Let alone allocation but the government shied away from the reality that today the country suffers from the pangs of unemployment, which is highest in last 45 years and the highest ever after 1972-1973 . It is not to say that only the National Democratic Alliance government can be made the scapegoat for it but, according to a survey by the National Sample Survey Office (NSSO), in the period 2017-18, 6.5 crore youths were rendered jobless.

Other major issues missing out from the focus of the Budget are health and education.

Anyway, it is a perfect pre-poll budget any political party in power would have thought of.