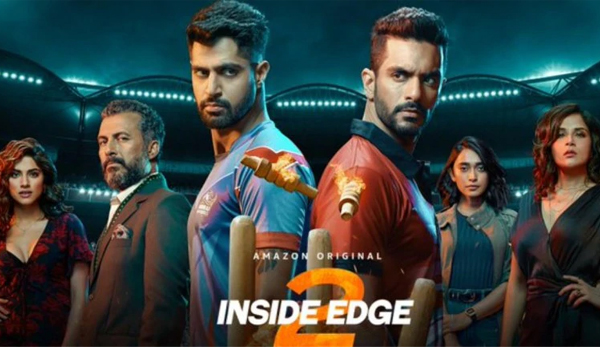 New Delhi, Nov 20 (UNI) The excitement for Amazon Prime Video’s latest offering ‘Inside Edge 2’ has gone a notch higher as the makers have finally unveiled the much awaited character posters of Vikrant Dhawan, role essayed by Vivek Oberoi and ‘Bhaisaab’ played by Aamir Bashir.The makers had recently shared the trailer of the show, with a whole lot of sports, secrets, and scandals where selfishness is a virtue and money, and power are mere means to an end- the whirlpool yet the interesting subject that the storyline touches upon.

In the poster, Vivek Oberoi is entering the league in style and a transformation of his look marks his comeback with something huge in the show. Not only this, introducing the new character ‘Bhaisaab’ played by Aamir Bashir with his enchanting look burning Vikrant Dhawan’s magazine showcases that the game will get bigger and much dirtier in order to get hold of power.

An International Emmy Awards nomination last year “Inside Edge”, was definitely a game changer portraying the story of Mumbai Mavericks, a T20 cricket franchise playing in the PowerPlay League. ‘Inside Edge’ is a story that pulls no punches, minces no words, and takes no prisoners. Above all, ’Inside Edge Season 2’ is a story of passion, courage, and love.

Joining the lead cast in season 2 are Aamir Bashir, Sapna Pabbi, and Makarand Deshpande. The series returns with its stellar cast from Season 1, including Vivek Oberoi, Richa Chadda, Angad Bedi, Tanuj Virwani, Siddhant Chaturvedi, Amit Sial, and Sayani Gupta. The second season is also produced by Farhan Akhtar and Ritesh Sidhwani under their banner Excel Entertainment and it will premiere on December 6 on Amazon Prime.