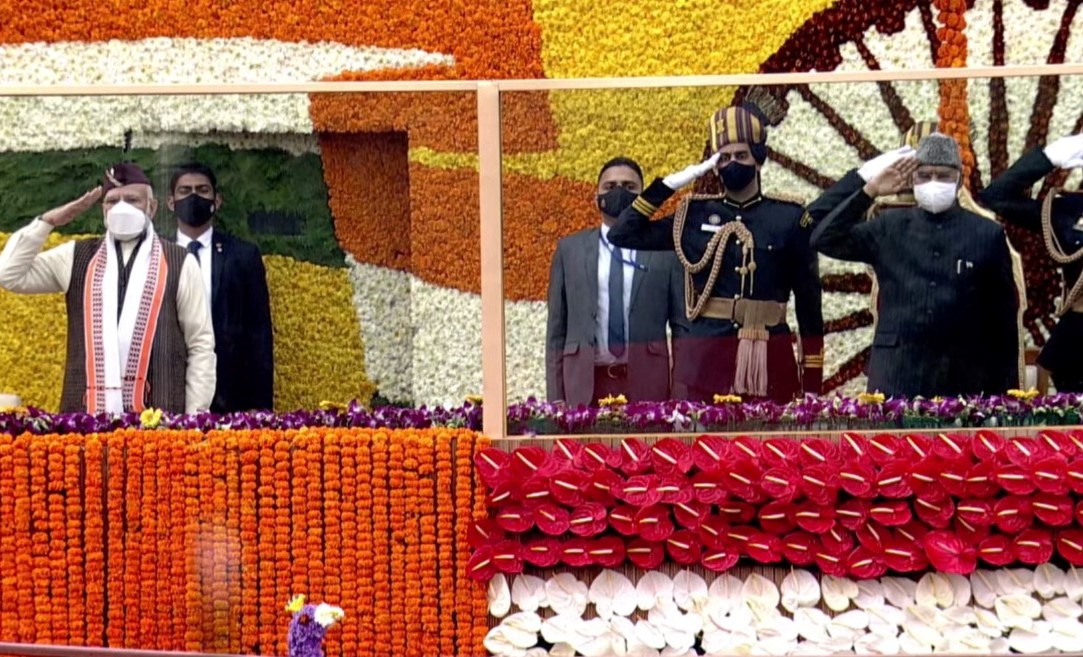 New Delhi: The Nation is celebrating 73rd Republic Day today. The main function is being held at Rajpath in the National Capital where President Ram Nath Kovind took the salute of the parade presented by Ceremonial Battery of 871 Field Regiment.

On the occasion, Jammu and Kashmir Police ASI Babu Ram were conferred with Ashok Chakra posthumously for displaying valour and courage during an anti-terror operation in 2020 in Srinagar in which he killed three terrorists. His wife and son received the award from President Kovind.

The Republic Day Parade ceremony started this morning with Prime Minister Narendra Modi visiting the National War Memorial where he led the nation in paying solemn tributes to the fallen heroes by laying a wreath.

The Ministry of Defence has conceptualized a series of new events for the main parade on Rajpath. Special arrangements have been made to give an opportunity to those segments of society which usually do not get to watch the parade. Some sections of auto-rickshaw drivers, construction workers, safai karamcharis, and frontline health workers have been invited to watch the Republic Day Parade.

India’s military might, cultural diversity, social and economic progress are on display in the Republic Day parade at the majestic Rajpath. There will be a total of 16 marching contingents in the Parade. Six from the Army, one each from Navy and Air Force, four Central Armed Police Forces, one from Delhi Police, two from National Cadet Corps, and one  National Service Scheme (NSS).

There will be 12 Tableaux from different Sates, Union Territories and 9 from Ministries and Departments. Biodiversity of Maharashtra, Symbols of Goan Heritage, the cradle of traditional handicrafts of Karnataka, Kashi Vishwanath Dham, Meghalaya’s 50 years of Statehood, Punjab’s contribution in freedom struggle, Jal Jeevan Mission, UDAN, National Education Policy, 150 years of Shri Aurobindo, Subhas @ 125 are some of the themes of tableaux. 480 dancers selected through Vande Bharatam dance competition will perform today at Rajpath.

Flypast which is the most awaited segment will have 75 aircrafts and helicopters of Indian Air Force. Vintage, as well as modern aircrafts like Rafale, Sukhoi, Jaguar, MI 17, Sarang, Apache and Dakota, will display different formations including Rahat, Eklavya, Trishul, Tiranga, Vijay and Amrit. The Ceremony will culminate with the National Anthem and release of Tricolour Balloons.

The Delhi Police has fortified areas in and around Rajpath with multi-layer security cover and has installed a Facial Recognition System and over three hundred CCTV cameras.