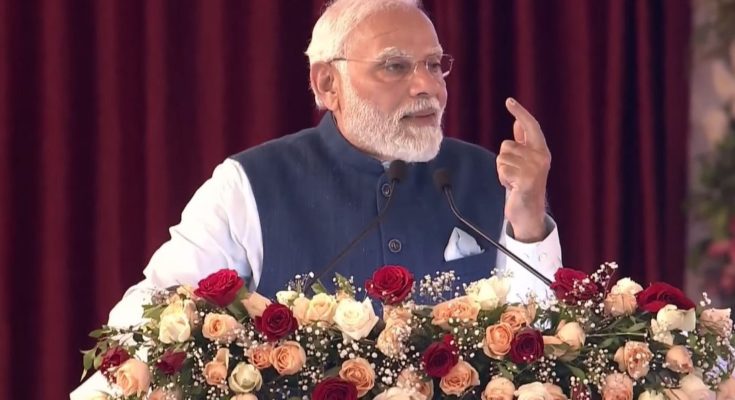 National Youth Festival: The Prime Minister, Shri Narendra Modi inaugurated the 26th National Youth Festival in Hubbali, Karnataka today. The programme is being held on National Youth Day, which is celebrated on the birth anniversary of Swami Vivekananda, to honour and cherish his ideals, teachings and contributions. The theme of the festival is ‘Viksit Yuva – Viksit Bharat’ and it brings diverse cultures from all parts of the country on a common platform and unites the participants in the spirit of Ek Bharat, Shreshtha Bharat.

Addressing the gathering, the Prime Minister said that the Hubbali region of Karnataka is known for its culture, tradition and knowledge where many great personalities have been awarded the Gyanpeeth Puraskar. He informed that this region has produced several great musicians like Pandit Kumar Gandharv, Pandit Basvaraj Rajguru, Pandit Mallikarjun Mansur, Bharat Ratna Shri Bhimsen Joshi and Pandita Gangubai Hangal and paid tributes to these personalities.

Highlighting the importance of National Youth Day in the year 2023, the Prime Minister remarked that on one hand, we have the exuberant National Youth Festival and on the other hand there is the Azadi Ka Amrit Mahotsav. “Arise, awake and stop not till the goal is reached”, the Prime Minister exclaimed quoting Swami Vivekananda Ji and said that it is the life mantra of the youth of India and said that we must emphasise and understand our duties to take the country forward in the Amrit Kaal.

Quoting Swami Vivekananda Ji, the Prime Minister said, “The development of a future and a nation becomes easy when we possess the power of the youth.” He mentioned that the land of Karnataka has gifted the nation with numerous personalities who gave foremost importance to their duties towards the nation and reached extraordinary feats at a very young age.

The Prime Minister gave the example of the Maharani Chinnamma of Chittoor and Sangolli Rayanna whose courage broke the resolve of the British Empire and also mentioned Narayana Mahadev Doni who sacrificed his life for the nation at the young age of 14 years. He also mentioned Lance Naik Hanumanthappa Koppad who survived at temperatures of -55 degrees celsius in Siachen. Commenting on the versatile young talent of the nation the Prime Minister said that Indian Youth is taking new strides in every field.

The Prime Minister said that India today is the 5th largest economy and “our goal is to take it into the top 3.” The Prime Minister reiterated emerging opportunities in the agriculture and sports sector and credited the power of the youth for this revolution. Emphasising the importance of the current moment in the history of the nation, the Prime Minister underlined that strong foundations are being laid in the fields of economy, education, sports and startups.

The Prime Minister emphasised the role of women power in keeping the nation’s strength alive and touched upon the instances of women shining in armed forces, space technology, space and sports.

The Prime Minister emphasised the two messages of Swami Vivekananda that should be a part of every youth’s life in this rapidly changing world of today. He said, “These two messages are- institutions and innovation!” The Prime Minister further explained that an institution is formed when we expand our idea and work with team spirit and urged every youth of today to augment their individual success in the form of team success. “This team spirit will take forward developed India as ‘Team India’”, the Prime Minister said.