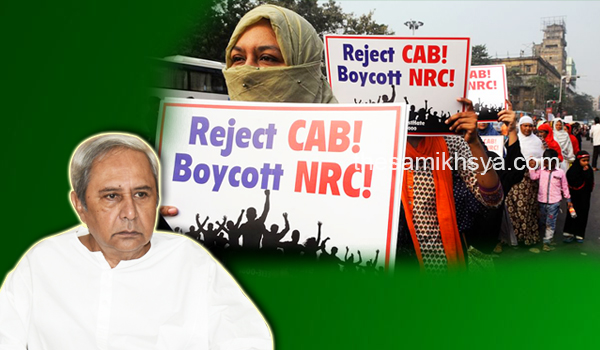 Yes to CAA and No to NRC has landed the Odisha chief minister Naveen Patnaik in a peculiar situation. First, by saying that, Odisha will not support the NRC in the state, he confronts a situation that any state doing away with NRC shall incur the wrath of the Centre and, according to a BJP spokesman, the states those who oppose NRC, may be brought under President’s rule !

For the chief minister that may turn to be too ticklish given the fact that, his political posturing in his relationship with the NDA, has really gone far enough to back-pedal.

Biju Janata Dal has supported the CAA in the parliament but the chief minister may have some troubles in the long run when CAA’s outcome, if, bursts with a population from the neighbouring  three Islamic countries and a sizable are sent to Odisha for citizenship.

Can Odisha Do away with NPR?

As is understood, each state is morally obliged to accommodate such non-Muslim refugees from the above countries facing religious persecution there. Once CAA becomes effective, Odisha government shall be bound by it to screen immigrant Muslims even settled in Odisha and reject the citizenship if found unauthentic. That would be really a tricky situation. Because, majority of them were here post the cut-off year and have become voters.

National Population Register(NPR) is, in essence, the precursor to the NRC and when the NRC process starts in next April, government officials would be assigned to physically scrutinise the citizens’ proofs when on the target would be the Muslims mainly.

Once supporting the CAA, the BJD government now either has to do away with the NPR else, NRC will prove a challenge for the State if, the chief minister really is against NRC.

It is in fact a two-edged sword before the chief minister of Odisha. Given his political bonhomie with the Centre, he cannot afford to be a chooser for convenience.

Nor the BJD regime is in a state to claim a political stance that can be viewed as contrarian one to the NDA.

By saying that, Odisha will not support NRC, Patnaik has taken a calculated risk that may position him awkwardly in between the Centre and his vote bank in which there is a sizable minority.