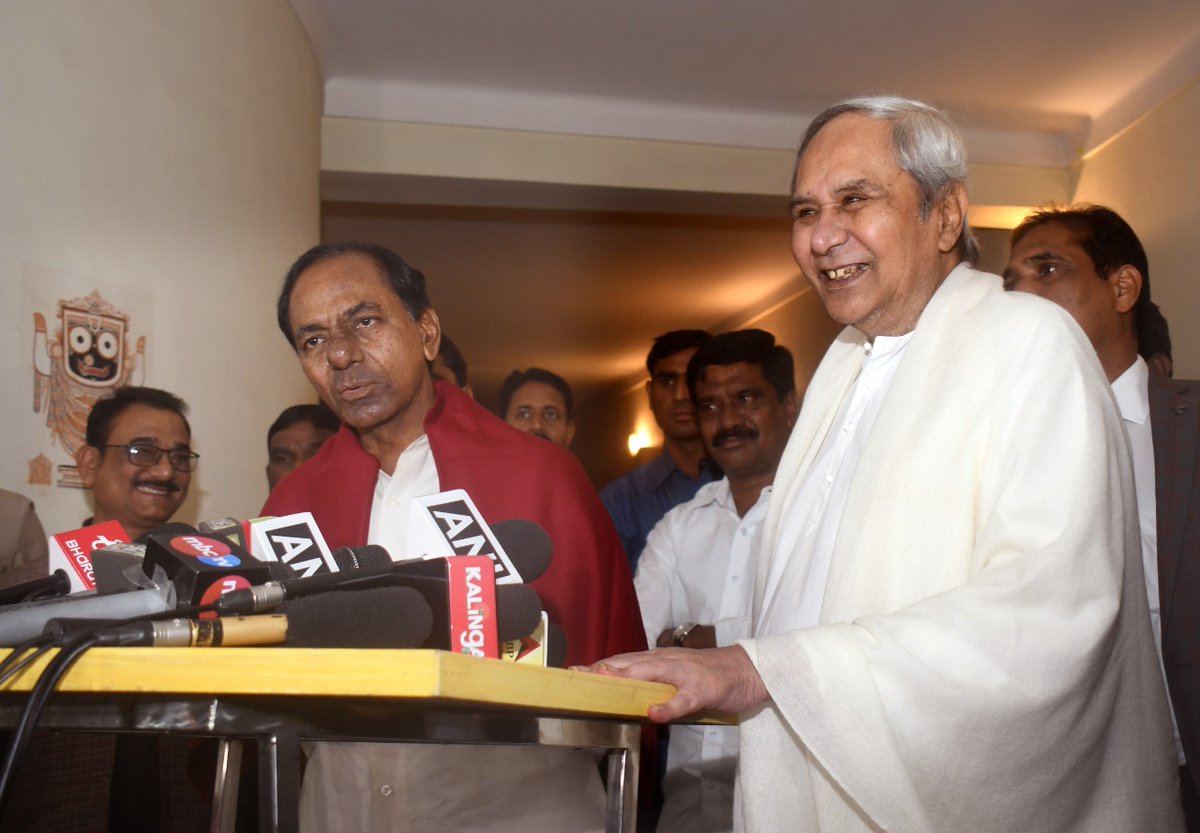 The meeting between chief minister, Naveen Patnaik and his Telengana counterpart, K. Chandrashekar Rao aka KCR, has expectedly fuelled speculation about the evolution of a federal front of non-Congress and non-BJP parties with focus on regional satraps.

The statements of the two chief ministers in the wake of the meeting did indicate that they had indeed discussed such a possibility though the contours of any new political combination that could offer an alternative to the UPA and NDA still remain largely nebulous. Much would depend upon the outcome of the meetings KCR is expected to have with regional satraps in other parts of the country over the next few weeks.

That being so it would be premature to read much into the KCR-Patnaik meeting which, it is instructive to remember, was originally scheduled to take place last May but did not come about then as the Odisha chief minister evinced little interest in the ‘third front’ overtures. He was equally disinterested in the offers to join either UPA or the NDA.

On the face of it Patnaik, who leads the Biju Janata Dal, Odisha’s most successful regional party till date, follows a policy of equi-distance from Congress and the BJP, even though he has not been consistent about it, making a little compromise here and there to suit his ends. For example, his party had no hesitation bailing out the NDA in the Rajya Sabha when it came to the passage of the crucial Mines and Mineral (Development and Regulation) (Amendment) Bill.

Patnaik also had no qualms backing Ram Nath Kovind, the NDA’s presidential nominee who eventually won the contest with ease. Sometime later he sprung another surprise by extending support to the Modi government’s move to demonetise high denomination currency. His party has also not been critical of the Goods and Services Tax (GST) in the same manner as some other political parties in the country.

No wonder, the critics of Patnaik see him as being soft towards the BJP, attributing this trait, first to his political compulsion of opposing the Congress at any cost, and secondly, to the fear of CBI, which is still probing the chit fund scam with many BJD leaders under the scanner. Some indeed have already been arrested and are out on bail.

It is also being pointed out that while Patnaik cannot afford to side with the Congress under any circumstances as the BJD stands on the foundation of anti-Congressism he shared power with the BJP in the state for nearly 10 years despite complete ideological divergence with the saffron party. The logic, thus, is that if the push comes to the shove, he can still go along with the BJP having dealt with it in the past. But the Congress remains untouchable.

The BJD leaders themselves, however, insist that their leader, despite his avowed policy of equi-distance from the BJP and Congress, believes in conducting his politics in a pragmatic manner as the overriding concern for him is protecting the interests of Odisha. Thus, the party did not mind supporting the MMDR (amendment) bill as the interest of the mineral rich state was at stake.

Patnaik apparently subscribes to the theory that in politics only interests are permanent, neither friends nor enemies. Call him an opportunist if you will, but this approach affords him a kind of flexibility that would be the envy of many politicians. Looking from that perspective the Odisha chief minister would feel inclined to take a step towards joining the efforts for a third front of regional parties only if it helps preserve the interests of his party and the state which does not seem to be the case at the moment. One would not be surprised if the Patnaik-KCR dialogue that sent the media into a tizzy ultimately turns out to be much ado about nothing.