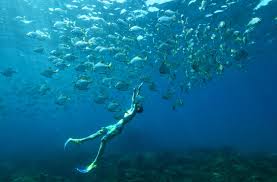 We the human being, supposedly the most privileged among all creatures of the globe are more good at commemorations and Days of certain issues as per the calendar . But, what is ironic is that the human is always cautious about the ways as how to keep his neck above the water oblivious to the condition of the bio-diversity we live with. Be it water, forest, wild animals or even the human greed or ignorance has not spared the ocean and the life under the water.

Today, March 3 is the day dedicated to the wildlife and there must be celebrations all across unmindful of the bottom reality that the venue where we celebrate has become eroded and porous by an overdose of human activity in myriad forms.

Underwater life is severely impacted by an “onslaught of threats,” but we already have the tools to positively influence ocean conservation, the UN has said in a statement marking 2019 World Wildlife Day which, this year, is celebrated under the theme “Life Below Water: for people and planet.”
March 3 was proclaimed World Wildlife Day by the UN General Assembly in 2013.
This is the first time that World Wildlife Day has focused on life below water, the crucial importance of marine species to human development, and how we can continue to save marine biodiversity for future generations.
Marine wildlife has sustained human civilisations for thousands of years, providing food; materials for construction; and enriching lives culturally, spiritually and recreationally. Today, some three billion people depend on marine and coastal biodiversity for their livelihoods.
But human activity is posing major problems, both for the planet’s oceans and for human lives, particularly in coastal communities. These problems include the over-exploitation of marine species, pollution, the loss of coastal habitats and climate change. Around one-third of fish stocks are being consumed at unsustainable levels, and up to half the world’s coral reefs have been lost due to factors such as warming sea temperatures, ocean acidification and a range of land-based activities.
However, international frameworks to halt or reverse these negative trends have existed for some time. For example, the targets of the internationally agreed Sustainable Development Goal 14 – for the conservation and sustainable use of the oceans, seas and marine resources – call for restrictions on the trade of marine species; the Clean Seas campaign, the world’s largest global alliance for combatting marine plastic pollution, with commitments covering more than 60 per cent of the world’s coastlines, is supported by 57 countries; whilst some 143 states back the Regional Seas Programme to promote the sustainable management and use of marine and coastal environments.
This year, UN Environment’s Wild for Life campaign, which aims to conserve wildlife on land and oceans, has ramped up its awareness-raising efforts, with the addition of new advocates, including actor Adrian Grenier, best known for playing Vincent Chase in the TV series Entourage, who was designated a UN Environment Goodwill Ambassador in 2018 in recognition of his long-standing environmental activism.
In an exclusive interview with UN News, Mr Grenier said that we can all make a contribution to improving the oceans and marine life: “Overfishing is a problem, so we want to reduce it as much as possible; consider where food comes from; and make sure it’s organic, because a lot of the chemicals in pesticides sprayed on crops end up running off into rivers, and can poison the sea.”
March 3 was proclaimed World Wildlife Day by the UN General Assembly in 2013, the day the Convention on International Trade in Endangered Species of Wild Fauna and Flora (CITES) was signed, as a way to celebrate and raise awareness of the world’s wild animals and plants. It has become the most important global annual event dedicated to wildlife.