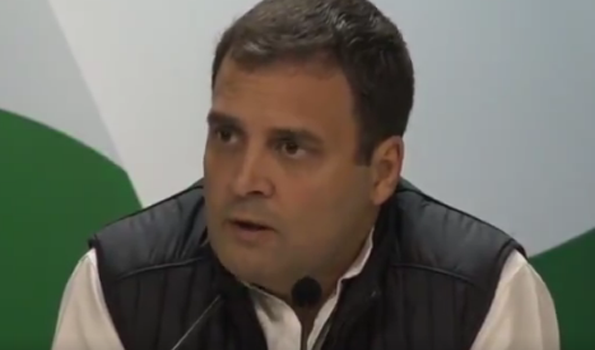 As he completes one year in office, Rahul Gandhi, as president of the Congress, has delivered wins for his party in the crucial Hindi heartland states of Rajasthan, Chhattisgarh and Madhya Pradesh.

Also, he has emerged as a ‘force to reckon with’ in the realm of Indian politics, having made a dent into the ‘invincible’ Modi brand.

The Congress youth icon leading the grand old party to a decisive win in the three Hindi states on Tuesday, his first win since he took over the reins of the party as its leader in campaigns for polls to the Lok Sabha and various state assemblies, has catapulted Rahul as an ‘unbeatable’ leader and an ‘impregnable’ force in Indian politics, party leaders say on the brilliant show in the recent assembly elections fought under Rahul’s leadership.

After Tuesday’s win in the assembly polls, Conrgess leaders were all praise for Rahul’s leadership and his championing of the cause of the marginalised sections of society.

Says AICC spokesperson Priyanka Chaturvedi, who was the media incharge for the Congress in the Madhya Pradesh assembly polls, “it is an honour and privilege to work with a leader who feels passionately for the welfare of the marginalised, empowering the weak and championing the cause of youth and women.’’

Adds AICC spokesperson Abhishek Manu Singhvi, “What a gift Mr Rahul Gandhi has given to the Congress and the country on anniversary of assumption of Presidentship.

“Almost 0–5 rout for BJP and a 3-0 victory in Hindi heartland. I had said a few days ago… mausam badal raha hai…ulti ginti shuru ho gayi hai…(the winds are changing, the reverse countdown for Modi has begun).’’

Rajasthan PCC chief Sachin Pilot also said that the wins in Rajasthan, Chhattisgarh and Madhya Pradesh were as a gift to the Congress president on first anniversary of his assuming the post.

“This is a big gift for Congress president Rahul Gandhi, who was elected as the party president exactly one year ago. The assembly election results show the people of the state have rejected the BJP in all the three states, including Madhya Pradesh and Chhattisgarh,’’ he said.

Rahul’s successfully leading the Congress campaign also won him support from those close to the BJP.

Sudheendra Kulkarni, a former aide of veteran BJP leader LK Advani, credicted Rahul for the victories of the Congress and taking the Congress party on a revival path.

‘’Significance No. 1 of Assembly Election 2018 :Congress is on revival path, which is good for India, for India’s democracy and for India’s secularism. A good part of the credit for this should go to Rahul Gandhi,’’Kulkarni said.

Political observers feel that the results of the latest round of assembly elections was also likely to convince a section of the opposition who are not agreeable for projecting Rahul as the Prime Ministerial face of the proposed Grand alliance.

They also feel that the convincing victory notched up by the Congress in the three Hindi states would also bring around parties like Samajwadi Party and the BSP who are yet to commit themselves to joining the proposed grand alliance of the opposition against the BJP in the 2019 assembly polls.

This, they say, is evident from the fact that BSP Chief Mayawati on Wednesday announced that her party was willing to support the Congress to form a Government in Madhya Pradesh to prevent the BJP from coming to power.

The BSP chief’s move is seen as an indication that the BSP would join the Grand alliance of the opposition for the 2019 Lok Sabha polls.

After Wednesday’s assembly poll results, the Samajwadi Party also announced its decision to support the Congress in government formation in Madhya Pradesh.

The stance taken by the BSP and the SP is in sharp contrast with the stand of these parties before the assembly polls wherein they had decided to fight the assembly elections in Madhya Pradesh independently.

The new found respect of the opposition leaders show that an year after assuming office as Congress president, Rahul has succeeded in emerging as a tall leader of the opposition who can pose a formidable challenge to Prime Minister Narendra Modi.

It is also evident from the new confident and aggressive tone of Mr Gandhi, which is in sharp contrast to his image as a reluctant politician in the 2014 Lok Sabha elections, where the Congress was reduced to 44 seats.

Several assembly elections held since the 2014 polls, including assembly polls in Haryana, Maharashtra and Uttar Pradesh, saw the party losing to the BJP.

Finally, in the Gujarat assembly polls, the party put up a formidable performance against the BJP, which galvanised an otherwise demoralised Congress cadre and also silenced his detractors within the party. However, the saffron party managing to secure a win in the state continued to put a question mark on Rahul’s leadership among the opposition.

Ever since Rahul took over the mantle of party president on December 16, 2017, he has made a lot of efforts to ensure the revival of the party.

It is under his leadership that the party, despite differences within the state units in Rajasthan and Madhya Pradesh, fought these elections unitedly.

While in Rajasthan, Ashok Gehlot and Sachin Pilot were asked to work together. In Madhya Pradesh, Kamal Nath, Jyotiraditya Scindia and Digvijaya Singh were seen fighting the elections unitedly.

The win in the three Hindi heartland states shows that Rahul’s view on farmers’ distress and unemployment have struck a chord among farmers and youth across the country.

The latest electoral victories, party leaders feel would elevate Rahul’s stature within the party as well as among the opposition parties.