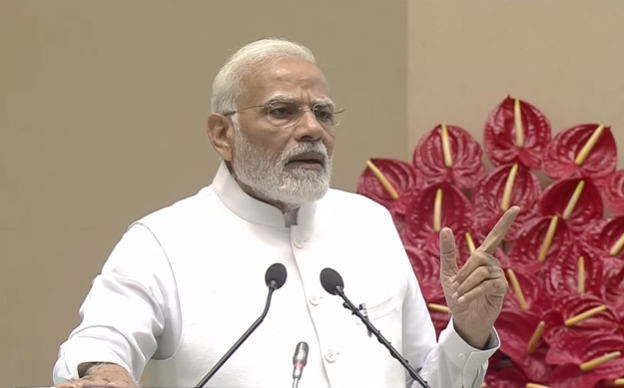 Addressing the gathering, the Prime Minister said that Vigilance Awareness Week began with the birth anniversary of Sardar Patel. “The entire life of Sardar Patel was dedicated to honesty, transparency and the building of a public service system based on these values”, he said. The Prime Minister remarked that the campaign revolving around awareness and alertness is based on these principles. He observed that the campaign of Vigilance Awareness Week is taking place to realise the dreams and aspirations of a corruption-free India and underlined its importance in the lives of every citizen.

The Prime Minister said for a developed India, trust and credibility are critical. that people’s trust in the government enhances people’s self-confidence. The Prime Minister lamented the fact that earlier governments not only lost people’s confidence but they also failed to trust people. The legacy from the long period of slavery of corruption, exploitation, and control over resources, unfortunately, received more strength after the independence. This severely harmed at least four generations of this country, he said. “We have to change this decades-long way fully in the Azadi ka Amrit Kaal”, the Prime Minister pointed out.

In his welcome address to Prime Minister, Union Minister of State for Personnel, Public Grievances and Pensions, Dr Jitendra Singh said, the ultimate aim for any civilised nation is to usher in corruption-free society and this precisely is the goal of the government headed by PM Narendra Modi.

Dr Jitendra Singh said, the roadmap to a developed India definitely lies in striving for a corruption free nation and a multipronged strategy of preventive, punitive and participative vigilance coupled with high integrity and moral values constitute the holistic approach for the way forward.

Dr Jitendra Singh said, this government through its program of digitisation has focused on improving delivery of service leveraging technology and the Central Vigilance Commission has also adopted the strategy of leveraging technology to prevent corruption and organizations are being persuaded to adopt e-procurement, e-payment systems and to disclose all vital information on their websites. He said, this free and unrestricted access to information is an antidote to corruption and added that use of technology and e- governance have proved to be powerful tools specially in removing corruption in the delivery of public service.

Taking note that the Vigilance Awareness Week being observed throughout the country, Dr Jitendra Singh said, this week provides a great opportunity for Government organizations to interact with all stakeholders, including vendors, customers, Gram Panchayats, Resident Welfare Associations, Civil Society Organizations and most importantly students at schools and colleges. He further added that interaction with them ensures that the idea of corruption free society percolates down to the grassroots level and it also provides opportunity to receive valuable inputs from them about the shortcomings in the system of administration, so that the service delivery mechanism can be improved to the satisfaction of the common citizen.

Dr Jitendra Singh said, preventive action in the long run is often more efficient, effective, and sustainable and therefore the good part of the strategy on combating corruption should be renewed focus on Preventive Vigilance. He said, the systemic changes in the governance mechanism through transparency and accountability would do a lot to reinforce citizens’ faith in administration. The Minister underlined the need for preventive strategies like simplification of rules and procedures and devising SOPs as more effective methods to curb corruption.

Dr Jitendra Singh also pointed out that the initiative of optimizing the use of technology is bound to be a deciding factor in eradication of corruption from public life as technology would ensure elimination of human intervention and use of discretion in decision making process. He said, it would ensure a transparent system based on first come first serve basis, which would help in equal opportunities to all and cherished dream of a developed nation, based on ethical conduct will be realized.

The Minister concluded by saying that the presence of students in today’s event is a heartening sign as they are the future of the country and imbibing moral, ethical values by them would ensure that integrity, accountability in the society not only remains deep rooted, but also flourishes, in the times to come. He said, achieving integrity, probity, and fairness in all aspects of public administration, requires the active participation of all stakeholders especially the participation of citizens.