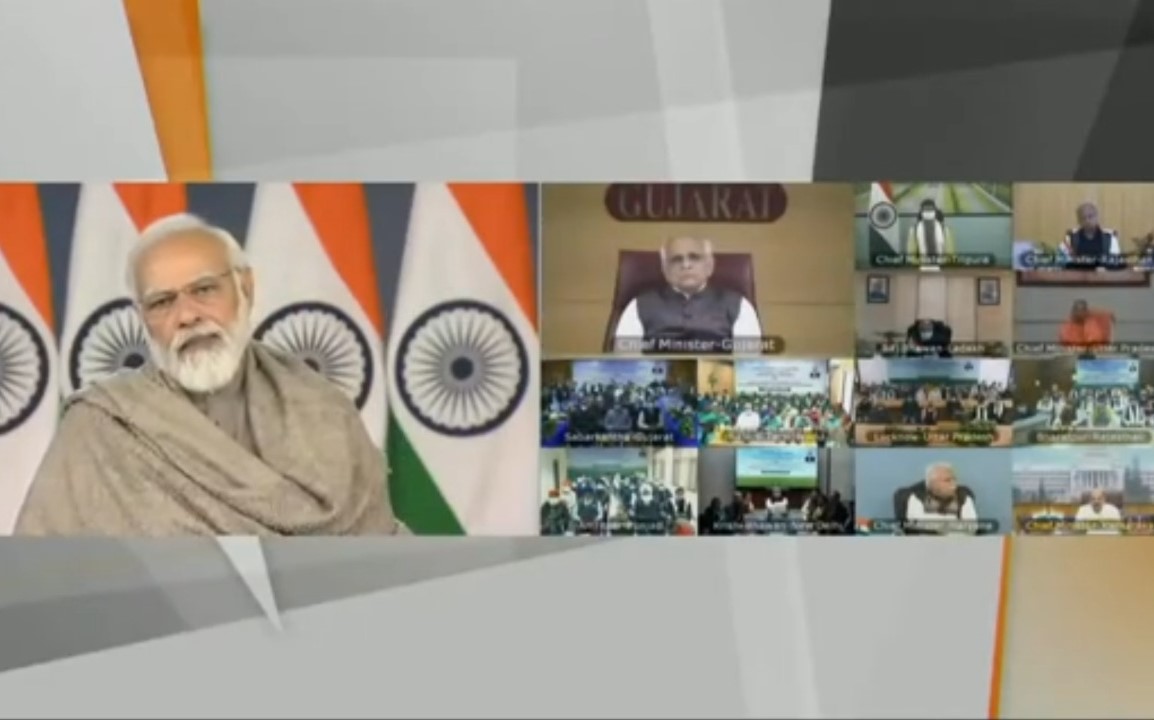 This enabled the transfer of an amount of more than Rs. 20,000 crore to more than 10 crore beneficiary farmer families. During the programme, Prime Minister also released equity grant of more than Rs. 14 crore to about 351 Farmer Producer Organizations (FPOs), which will benefit more than 1.24 lakh farmers. Prime Minister interacted with FPOs during the event. Union Minister Narendra Singh Tomar and Chief Ministers, LGs, Agriculture Ministers and farmers from several states were linked to the event.

The FPO from Punjab informed the Prime Minister about the ways of disposing off the parali without burning. They also talked about the superseeder and help from government agencies. The Prime Minister wished that their experience of Parali management should be emulated everywhere.

FPO from Rajasthan talked about the honey production. They said that concept of FPO has been very useful for them with the help of NAFED.

FPO from Uttar Pradesh thanked the Prime Minister for creating FPOs as foundation of the prosperity of the farmers. They talked about their process of helping the members with seeds, organic fertilizers, variety of horticulture products. They also talked about helping farmers with getting benefits of the government schemes. They are getting benefits of e-Nam facilities. They promised to fulfil the Prime Minister’s vision of doubling the farmers income. The Prime Minister said that the confidence of the country’s farmer is the key strength of the country.

FPO from Tamil Nadu informed that with NABARD support, they formed FPO to get better prices and the FPO is fully owned and operated completely by women. They informed the Prime Minister that Sorghum is being produced due to the weather conditions of the area. The Prime Minister said Nari Shakti’s success is indication of their indomitable will power. He asked the farmers to take benefits of millet farming.

FPO from Gujarat talked about natural farming and how cow-based agriculture can reduce the expense and stress on soil. Tribal communities of the region are also benefitting from the concept.

Speaking on the occasion, the Prime Minister offered his condolences for the victims of stampede at Mata Vaishno Devi shrine. The Prime Minister also informed that he talked to the LG Shri Manoj Sinha regarding the arrangements for the injured.

The Prime Minister said that today when we are entering the new year, we need to embark upon a new journey taking inspiration from the achievements of the past years. The Prime Minister recalled the nation’s effort in fighting the pandemic, vaccination and making arrangement for the vulnerable sections during the difficult period.

The country is moving with the mantra of SabkaSaath, Sabka Vikas and SabkaPrayas. Many people are spending their lives for the country, they are building the country. The Prime Minister said that they used to do this work earlier also, but now there work is being recognized. “This year we will complete 75 years of our independence.

This is the time to start a new vibrant journey of the country’s resolves, to move forward with renewed vigour”, he said. Elaborating on the power of collective effort, the Prime Minister pointed out “when 130 crore Indians take one step, it is not merely one step but it amounts to 130 crore steps.”

Speaking about economy, the Prime Minister said that on many parameter, Indian economy is looking better than pre-covid days. He pointed out that “today the growth rate of our economy is more than 8%. Record foreign investment has come to India. Our forex reserves have reached record levels. Old records have also been surpassed in GST collection. We have also set new records in the matter of exports, especially in agriculture.” He said that in 2021 transection of more than 70 lakh crore rupees was done on UPI. More than 50 thousand start-ups are working in India out of these 10 thousand came up during last six months.

Year 2021, the Prime Minister said, was also the year of strengthening India’s cultural heritage. Initiatives like beautification and development of Kashi Vishwanath Dham and Kedarnath Dham, Renovation of Samadhi of Aadi Shankaracharya, restoration of stolen idol of goddess Annapoorna, construction of Ram Mandir in Ayodhya and getting World Heritage status for Dholavira and Durga Puja festival are strengthening India’s heritage and enhancing its tourism and pilgrimage potential.

Year 2021 was an year of optimism for the Matra-Shakti also. Sainik Schools were opened for girls along with the doors of National Defence academy. In the year just gone by, attempts were initiated for raising marriage age for girls be raised to 21, equal to boys. Indian sports persons also brought glory to the nation in 2021. India is making unprecedented investment in the sporting infrastructure of the country, the Prime Minister informed.

Leading the world against climate change, India has also set a target of Net Zero Carbon Emission in front of the world by 2070. Many records of renewable energy, the Prime Minister said, are being met by India before time. Today India is working on hydrogen mission, taking lead in electric vehicles, he pointed out. The Prime Minister continued and said that PM Gatishakti National Master Plan is going to give a new edge to the pace of infrastructure construction in the country. “Giving new dimensions to Make in India, the country has implemented ambitious plans for new sectors like chip manufacturing, semiconductor”, he added.

The Prime Minister summarized the mood of today’s India saying “devotingto the nation with the spirit of ‘Nation First’, is becoming the sentiment of every Indian today. And that is why, today there is unity in our efforts and in our resolutions.There is impatience for accomplishment. Today there is consistency in our policies and farsightedness in our decisions.”

The Prime Minister said that PM Kisan Samman Nidhi is a big support for India’s farmers. If we include today’s transfer, more than 1.80 lakh crore rupees have been transferred directly to the accounts of the farmers, he said.

The Prime Minister said that through FPO’s small farmers are feeling the power of collective strength. He pointed out five benefits of FPOs for small farmers. These benefits are increased bargaining power, scale, innovation, risk management and adaptability to the market conditions.

Keeping in mind the benefits of FPO’s the government is promoting them at every level. These FPOs are getting help of upto 15 lakh rupees. As a result, FPOs like Organic FPOs, Oil Seed FPOs, Bamboo clusters and Honey FPOs are coming up all over the country. “Today our farmers are benefitting from the schemes like ‘One District One Products’ and markets, both nation and global, are opening for them”, the Prime Minister said. He said that reliance on imports is being reduced by schemes like National Palm Oil Mission with a budget of 11 thousand crore rupees.

The Prime Minister talked about the milestones that were achieved in the agriculture sector in the recent years. Food grain production touched 300 million tonnes, similarly Horticulture and floriculture production reached 330 million tonnes. Milk production also increased almost 45 per cent in last 6-7 years. About 60 lakh hectare land was brought under micro irrigation; more than 1 lakh crore were given in compensation under Prime Minister FasalBimaYojna, whereas premium received was just 21 thousand crores.

Ethanol production increased from 40 crore litres to 340 crore litres in just seven years. The Prime Minister also informed about the Goberdhan Scheme to promote bio-gas. If there will be value in cow dung, he said, the non miltching animals will not be burden on farmers. The Government has established Kaamdhenu Commission and is strengthening dairy sector infrastructure.

The Prime Minister once again pushed for promotion of natural farming. He said that chemical-free farming is a major way of protecting the health of soil. Natural farming is a key step in this direction, he said. He asked for making every farmer aware of the processes and benefits of natural farming. The Prime Minister concluded by calling upon the farmers to keep on doing innovation in farming and support the movement like cleanliness.