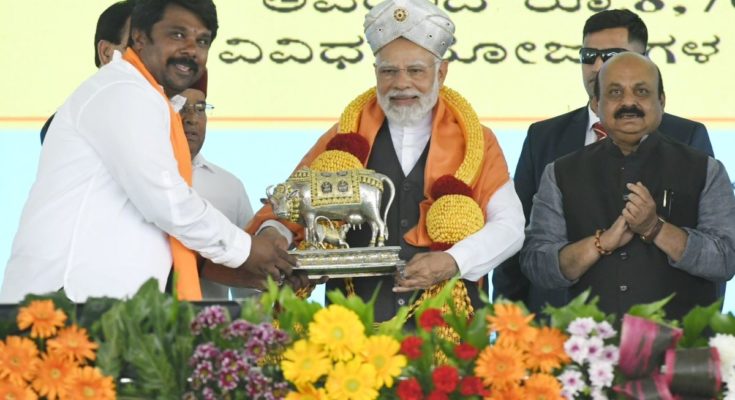 Addressing the gathering, the Prime Minister highlighted the love and support of the people of Karnataka and said that it has become a source of great strength. Throwing light on the rich history of Yadgir, the Prime Minister pointed out the ancient fort of Rattihalli which is a symbol of the capabilities of our ancestors and reflects our culture and traditions. He also mentioned the heritage of the great king Maharaja Venkatappa Nayak whose idea of swaraj and good governance was noted all over the country. “We all take pride in this heritage”, the Prime Minister said.

Referring to the projects related to roads and water dedicated or for which the foundation stone was laid today, the Prime Minister said these projects will provide massive benefits to the people of the region. Surat Chennai Corridor’s Karnataka portion also saw the start of work today which will enhance ease of living and help employment and economic activity in region including Yadgir, Raichur and Kalburgi. The Prime Minister praised the state government for development work in North Karnataka.

The Prime Minister reminded that the coming 25 years are ‘Amrit Kaal’ for the country and for every state. “We have to create Viksit Bharat during this Amrit Kaal. This can happen only when every person, family and state gets associated with this campaign. India can be developed when the life of the farmer in the field and the entrepreneur is improved. India can be developed when there is good crop, and factory output also expands. This will need learning from the negative experiences and bad policies of the past”, he said. Giving the example of Yadgir in North Karnataka, the Prime Minister lamented the backwardness that prevailed in the region in the path of development. Even though the region had the capability, the Prime Minister observed that the past governments had absolved themselves just by declaring Yadgir and other such districts as backward.

He recalled the time when the ruling governments of the past indulged in vote-bank politics and did not pay heed to basic infrastructure like electricity, roadways and water. Highlighting the priorities of the present government, the Prime Minister remarked that its focus is solely on development and not vote-bank politics. “Even if one district in the country lags behind on the parameters of development, the country cannot become developed”, the Prime Minister said. He noted that it was the present government that addressed the most backward regions on priority and initiated the hundred aspirational villages campaign including Yadgir.

The Prime Minister noted the emphasis on good governance and development in these regions and informed that Yadgir has vaccinated 100 percent of children, the number of malnourished children has gone down significantly, all villages of the district are connected via roads and availability of common service centres in gram panchayat to provide digital services. “Be it education, health or connectivity, Yadgir has been among the top 10 performers of the aspirational districts programme”, the Prime Minister remarked. The Prime Minister congratulated the public representatives and district administration for their remarkable achievements.

Throwing light on the projects inaugurated today, the Prime Minister underlined that the target of providing tap water to every house in Yadgir will get a boost. He informed that a study conducted revealed that lives of more than 1.25 lakh children will be saved every year due to the impact of India\’s Jal Jeevan Mission. Noting the benefits of the Har Ghar Jal campaign, the Prime Minister highlighted that the central government gives Rs 6,000 to the farmers under the PM Kisan Samman Nidhi scheme and the Government of Karnataka adds Rs 4,000 more which doubles the benefits for the farmers. “About 1.25 lakh farmer families of Yadgir have received about Rs 250 crore from PM Kisan Nidhi”, the Prime Minister added.

Further elaborating on the rhythm of the double engine government, the Prime Minister said as the Center launches the New Education Policy, Karnataka Government is helping poor students through Vidya Nidhi schemes, as the centre keeps the wheel of progress moving Karnataka is making the state attractive for the investors. “Karnataka government augments the Center’s help to weavers under Mudra Scheme by giving them further help”, he added.

Noting the benefits of the double-engine government when it comes to connectivity in Karnataka, the Prime Minister noted that it is equally important for agriculture, industry and tourism and highlighted the benefits to large parts of North Karnataka with the completion of the Surat-Chennai Economic Corridor. The Prime Minister informed that it will also be easy for the countrymen to reach the tourist places and pilgrimages of North Karnataka thereby creating thousands of new employment and self-employment opportunities for the youth. “The focus of the double engine government on infrastructure and reforms is turning Karnataka into an investors\’ choice”, the Prime Minister remarked as he said that such investments are going to increase further in the future due to the enthusiasm all over the world to invest in India.