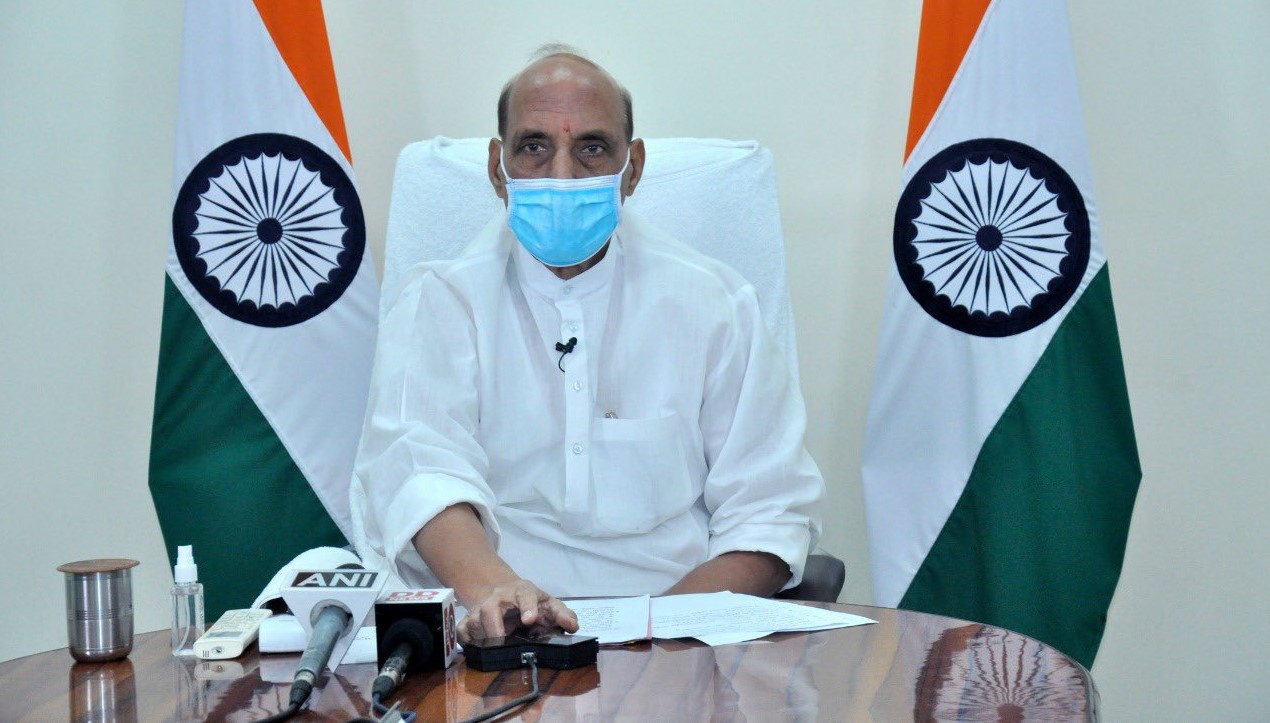 New Delhi: Raksha Mantri Shri Rajnath Singh has exhorted US companies to take advantage of the policy initiatives taken by Prime Minister Shri Narendra Modi-led Government in India and carry out joint R&D, manufacturing and maintenance of defence equipment to achieve the vision of ‘Make in India, Make for the World’.

The Raksha Mantri was addressing the members of American Chamber of Commerce in India (AMCHAM India) through video conferencing during its 30th Annual General Meeting on April 21, 2022. He invited the US companies for co-production, co-development, investment promotion and development of Maintenance Repair and Overhaul facilities in India.

“Of late, some US companies have expanded their local presence in partnership with Indian industry to achieve our aim of ‘Make in India, Make for the World’. We believe this is just a beginning. With increasing business, we aspire for increased investments by US companies in India.

Making full use of the Industrial Security Agreement, we need to facilitate collaboration & indigenisation of defence technology and boost the participation of US and Indian companies in each other’s defence supply chains. American companies are welcome to establish manufacturing facilities in India,” said Shri Rajnath Singh.

The Raksha Mantri listed out a number of initiatives taken by the Government to facilitate partnerships between major Original Equipment Manufacturer (OEMs) and Indian companies. “From increase in FDI limit to improving ease of doing business and from encouraging innovation through the iDEX platform to an enhanced positive list to give fillip to manufacture in India, the government is sharply focussed on enhancing the share of defence manufacturing, export by India-based companies and joint ventures,” he said.

Shri Rajnath Singh pointed out that US companies have not only been a source of FDI & employment in India, but are also contributing to India’s defence exports, totalling around $2.5 billion to US in last five years, which is 35 per cent of total exports achieved during the period. He said, the participation of US entities in joint R&D and industrial collaboration with Indian public and private sectors will be important for the success of ‘Aatmanirbhar Bharat’ and further strengthening the US-India relationship.

The Raksha Mantri termed the recently held India-US 2+2 Ministerial Dialogue in Washington as positive and fruitful, saying that the defence sector is a strong and growing pillar of the bilateral relationship. He stated that the ties are built on foundational agreements, military-to-military engagements, cooperation in enhancement of defence capabilities, defence trade and technology cooperation, mutual logistic share and now a new emphasis on co-development and co-production. He emphasised on the need to move from a buyer-seller relationship to one of partner nations and business partners. India and US are uniquely poised to leverage each other’s strengths for a mutually beneficial and bright future, he said.

“When seen from the perspective of strategic convergence, India and US share a commitment to democracy pluralism and rule of law. We have a growing convergence of strategic interests as both countries seek a resilient, rules-based international order that safeguards sovereignty and territorial integrity, upholds democratic values and promotes peace and prosperity for all. Both India and US share a common vision of a free, open, inclusive and rules-based Indo-Pacific and Indian Ocean Region. The India-US Comprehensive Global Strategic Partnership is of critical importance for international peace, stability and prosperity,” Shri Rajnath Singh added.

The Raksha Mantri underlined the importance of strengthening the commercial and economic pillar of the India-US partnership to advance economic growth and deliver mutual prosperity for both countries. He termed the India-US economic relationship as one of the defining business relationships of the 21st century.

“There has been a rebound in bilateral trade between the two countries over the last year, surpassing $113 billion in goods. In the same period, we have started to realise successes in the journey towards the Prime Minister’s vision of ‘Aatmanirbharta’ by increasing India’s participation in global supply chains and surpassing $400 billion in exported goods for the first time in history. Trade and investment relationship with US is an important component of this success story,” he said.

Shri Rajnath Singh added that during the 2+2 Ministerial meeting, India and US confirmed their intent to advance cooperation in Critical and Emerging Technologies such as advanced communication technology, artificial intelligence, quantum science, STEM, semi-conductors and biotechnology.

He urged the private industry to develop and undertake joint research and development projects, mobilise finance, promote technologies, and enhance technical collaboration. He voiced the Government’s resolve to work together for the exchange of best practices and development of technology to enable affordable deployment and commercialisation of CET.

AMCHAM-India is an association of American business organisations operating in India. Established in 1992, AMCHAM has over 400 US companies as members. The principal objectives include promotion of activities that would encourage and stimulate investment by US companies in India and increasing bilateral trade.