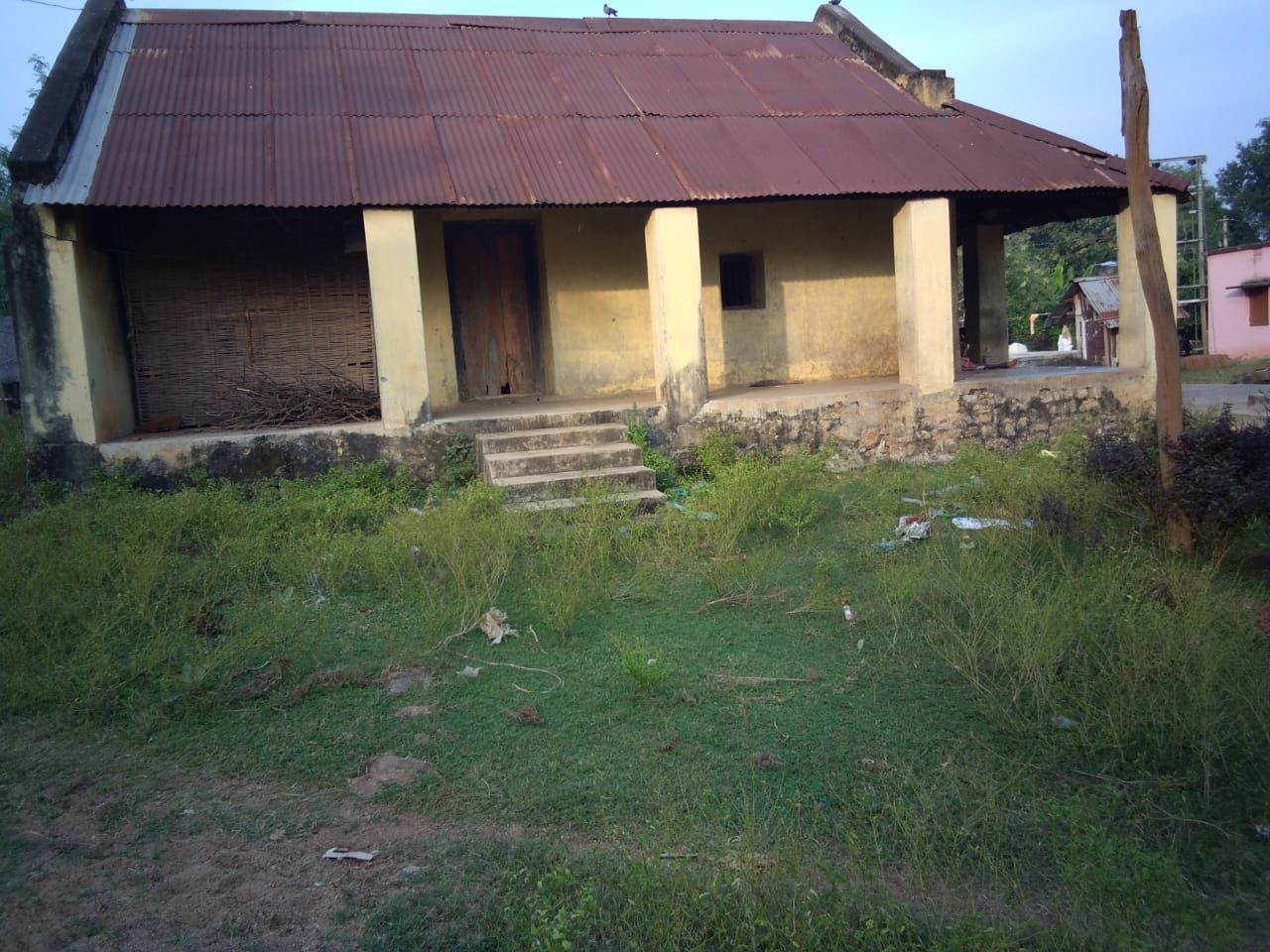 Jugal Behera died at the age of 63 on October 13, two days after Cyclone Titli made its landfall on the Andhra Pradesh-Odisha border.

Local newspapers reported that the visually impaired Behera, a resident of Deogan village under Odagaon block of Nayagarh district, died allegedly due to hunger.

A remote village around 30 kilometres from the district headquarters, Deogan comprises 160 families, mostly from the Other Backward Classes (OBCs). Agriculture is the major source of occupation for the villagers. However, with depleting return from agriculture youths of the village have started migrating to various states like Kerala and Tamil Nadu in search of work. For a majority of the families, the money sent by the youths is the major source of income.

Behera belonged to an OBC community. Unmarried, he was living on the veranda of a closed mutt (in pic above) in the village. Son of a cattle-grazer, he was landless. He had two brothers one of whom is alive. Except for support like a meal once in a while, he did not take any support from the children of two of his brothers. like him, they are also landless and work as daily wage labourers.

Behera’s only source of income was the disability pension of Rs.500 per month and 5 kg of rice he was entitled to as a priority household (PHH) card holder. According to the villagers, he used to buy food from the nearby temples with his pension money, give his PHH rice to the family of his nephew Pradeep Behera, who provided cooked meal in return.

According to Pradeep, his uncle hardly owned any asset of his own except for few clothes, which were disposed of after his death. Villagers told Behera was not keeping well in the last few days. He had got fever and cough, and infection on his testicles but could not get any treatment as he had problems in mobility. Nobody took him to hospital either.

Pradeep said he gave his uncle some paracetamol tablets after which the fever came down. During the period he mostly perched himself on the veranda of the mutt. Sometime he sat near the anganwadi centre building when it was too hot to sit near the veranda.

The old man’s immediate family members said that he was a man with high self-esteem and did not like to live on anybody’s mercy.

Both the villagers and immediate family members were of the view that Behera was getting his entitled rice and pension regularly. The Nayagarh district administration also shared in a tweet that Jugal was getting pension and ration regularly. However, it could not be ascertained who had his pension and ration card. Neither the family members nor the villagers could tell about it clearly. When asked about Behera getting food from anganwadi centre or school, it was categorically denied both by villagers and his immediate family members.

Anganwadi helper Bidulata Biswal said that he neither asked for food from the centre nor was it provided to him by them. She was unaware of any provision of providing food to such destitute persons. According to the villagers, anganwadi worker Pabita Sahani who stays in Nayagarh town did not come to the centre frequently.

When Cyclone Titli made its landfall on 11th October, Deogan also faced the brunt of high speed wind and torrential rain for two days. Sadly, during the whole period Behera was lying in the open veranda of the mutt. No one from the immediate family or village bothered to take him inside their house. He faced the heavy rain and wind without any food and medicine.

After the cyclone was over, he was found by villagers with shivering fever. He died soon after. “The cyclone came as death for him,” said a villager.

In spite of the news being reported in many newspapers, the government had not formed any fact finding team to enquire the cause of the death and it seems the administration thinks avoidance is the best approach.

The tragic case of Behera is similar to hundreds of aged person and people living with disability. They are covered under social security mechanism like public distribution system and pension but still have to live with hunger.

Recently, Right to Food Campaign has come out with details of 63 persons across India who died out of hunger as reported by their families and the media. Ten persons from Odisha made it to the list. Jugal Behera’s became the 11th one.

It is highly likely that such people succumb to aliment as trivial as fever. The way the community looked away when Behera was facing the brunt of Cyclone Titli shows that we are becoming insensitive as a society by the day. In such grave time of breaking societal net, no government mechanism has evolved to identify such aged and disabled people living with hunger and to provide them with cooked food and necessary medical care.

It is high time that all such people living with hunger are identified and provide with food, care and support. Why can the state not engage state sponsored groups like Biju Yuba Vahini in such effort? It is also high time that civil society steps in to build collectives of concern citizens consists of young, men and women both in urban and rural areas, who don’t look away when someone is in dire need to food and care.