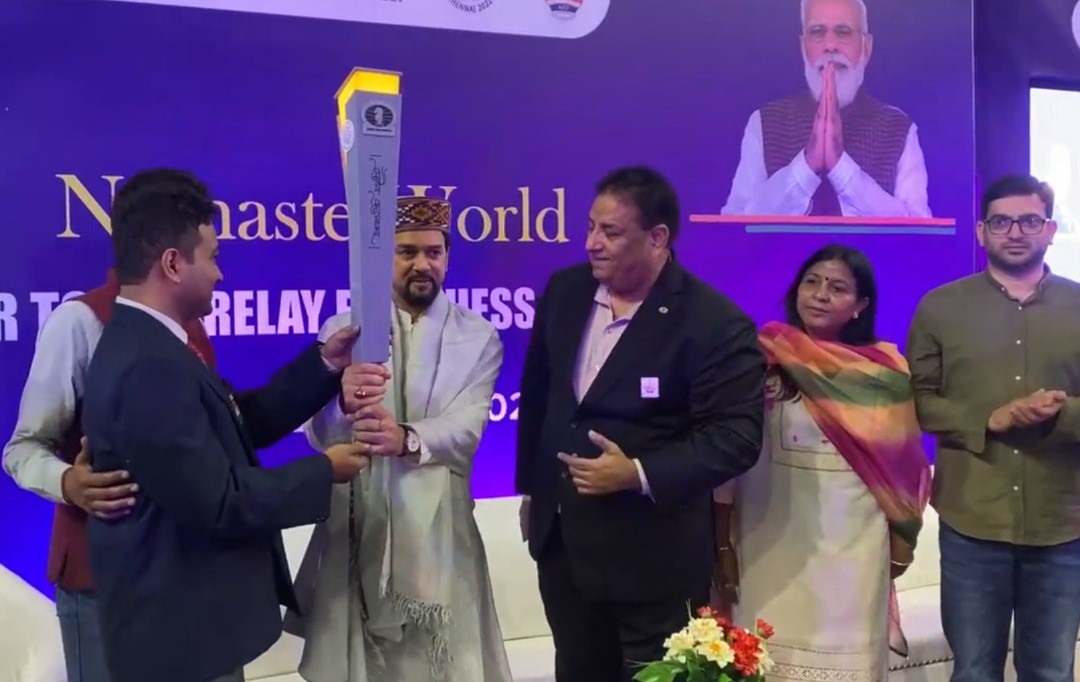 New Delhi: Union Minister of Youth Affairs and Sports Shri Anurag Singh Thakur was the chief guest at the Dharamshala stopover of the first-ever Chess Olympiad torch relay ceremony on Wednesday morning. The historic torch relay was launched by Prime Minister of India Shri Narendra Modi at the IG Stadium in New Delhi on Sunday June 19.

The Chess Olympiad torch will be relayed across 75 cities in India, commemorating the occasion of Azadi Ka Amrit Mahotsav – celebrating 75 years of India’s independence.

“Chess in India has a long heritage and history. We started from Chaturanga to Shatranj,” Shri Anurag Singh Thakur addressed the gathering at HPCA. “For the first time in the history of the Chess Olympiad, India is hosting the event and what better occasion than Azadi ka Amrit Mahtosav.

A total of 188 countries, over 2000 players and 1000 officials will come to India during the Chess Olympiad. I congratulate AICF for taking this step and giving a chance to young chess enthusiasts to meet their senior counterparts and Grandmasters.”

Also present on Wednesday in the torch relay ceremony at HPCA Dharamshala was Shri Rakesh Pathania, Minister of Youth Services and Sports and Minister of Forest Govt of Himachal Pradesh, Sh. Bharat Singh Chauhan, General Secreatary, All India Chess Federation, as well as other Sports Ministry, Sports Authority of India and AICF officials.

A gathering of 500 people comprising school students, athletes of SAI centre Dharamshala, NYKS volunteers and youngsters from Himachal Chess Association graced the event at HPCA. Chess Grandmaster Deep Sengupta was present to hand over the torch to Shri Thakur and carry it forward to Shimla later in the day.

Recalling the Torch relay launch ceremony event, Shri Thakur added, “PM Modi ji started this historic torch relay and around 10000 people were there in attendance that day to watch the event LIVE. Now, we have to keep this flame reach every nook and corner of the country and spread the game to every corner of India. As the Union Sports Minister and a lover of sports, I will ensure no stone is left unturned to popularize chess in Himachal and India.”