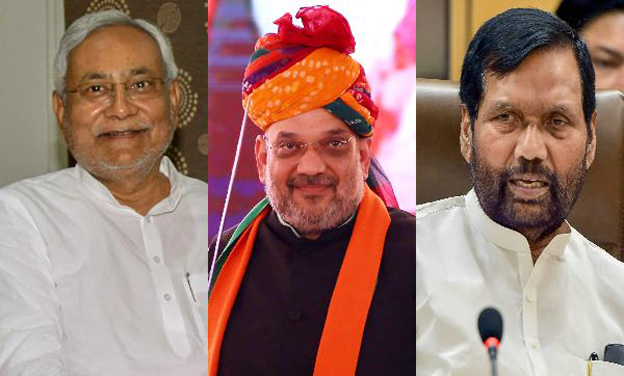 In the 2019 general elections, politically volatile Bihar may spring a big surprise. With few months left for the general elections, the politics in the state is in a flux, which has added to the discomfiture of the Bharatiya Janata Party, now hard pressed for Lok Sabha seats to retain power at the Centre.

It is all because of Bihar chief minister Nitish Kumar and his Janata Dal (United). Kumar has been the most important factor in the state’s politics for over a decade. All realignments of forces during these years have been reactions to the action of Kumar and JD (U). And things are going to be the same in 2019.

During 2014, JD (U) and Laloo Prasad Yadav’s Rashtriya Janada Dal contested the Lok Sabha elections separately. When the National Democratic Alliance led by the BJP won 31 of the state’s total 40 Lok Sabha seats, the RJD got four and JD (U) just two. That forced Kumar to forge an alliance with the RJD and the JDU (U)-RJD combine trounced the BJP in the assembly elections the very next year.

However, Kumar resigned from the post of the chief minister in 2017 citing difference with the RJD only to return to his post with the help of the BJP. His joining hands with the BJP made the NDA partners from Bihar,  Rashtriya Lok Samata Party led by Upendra Kushwaha and Lok Janshakti Party led by Ramvilas Paswan, uncomfortable. Kushwaha has positioned the RLSP as a fierce political opponent of Kumar’s JD (U) in the last few years and it was expected that he would ditch the NDA sooner or later.

After the BJP and JD (U) struck a deal on contesting equal number of Lok Sabha seats, Kushwaha joined the Mahagathbandhan formed by the RJD and Congress. Former BJP ally Hindustani Awami Morcha, headed by former Bihar chief minister Jitanram Manjhi, has already been accommodated by the Mahagathbandhan.

With RLSP’s exit, Paswan went for hard bargain extracting as much political pound of flesh as possible from the BJP. As per a deal struck between him and BJP chief Amit Shah on Sunday in Patna, the BJP and JD (U) will each contest in 17 Lok Sabha seats. While the LJP will contest in six seats, it will also get a Rajya Sabha seat for Paswan himself.

This arrangement has squeezed the BJP’s space. After all, the national party, riding the crest of Prime Minister Narendra Modi’s popularity, had won 22 Lok Sabha seats from Bihar in 2014. But now the political situation has changed and it desperately needs the support of the JD (U) and LJP. So it had to compromise five seats it had won to both the parties.

There is no guarantee that the BJP will win all the 17 seats it contests in 2019. Paswan’s party also may not win all six seats. But the real winner from this arrangement is JD (U). It is definitely going to vastly improve on its measly tally of two seats in 2014. If that happens, Kumar will be in a position to dictate terms to a weaker BJP after the general elections. Or will he ditch the national party?