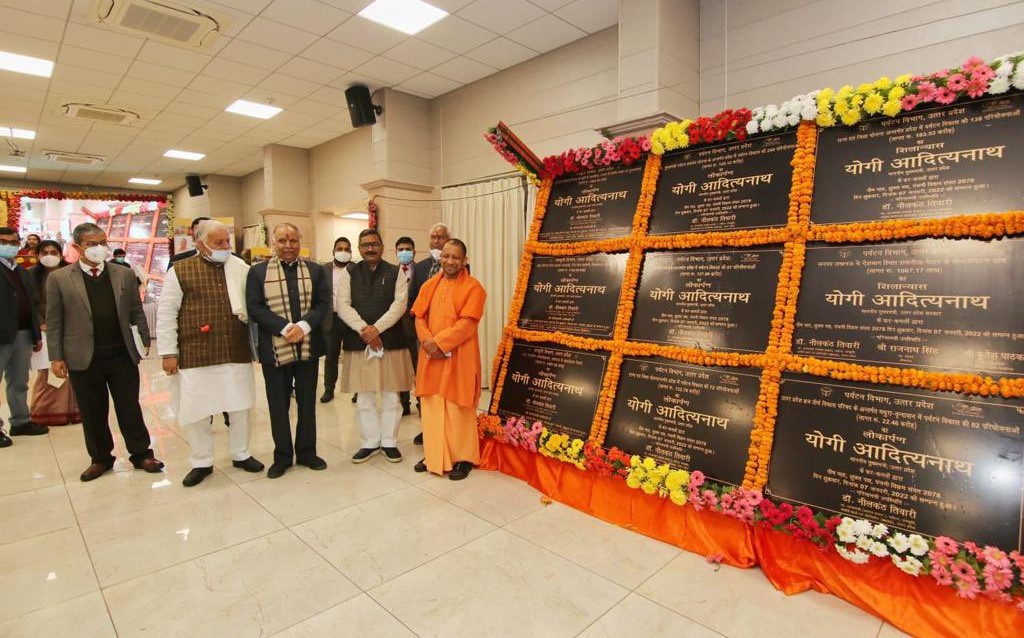 New Delhi: Union Minister of Tourism, Culture and Development of North Eastern Region (DoNER) G. Kishan Reddy along with Chief Minister of Uttar Pradesh Yogi Adityanath and Minister of State for Tourism and Defence Ajay Bhatt inaugurated various components developed at the Govardhan Bus Stand under the project “Development of Govardhan, Mathura” under PRASHAD Scheme of the Ministry of Tourism today virtually.

The Union Minister Sri G. Kishan Reddy said that under the leadership of Prime minister India has achieved the historic feat of administering 150 crore vaccinations. The Minister also reminded the stakeholders that Covid has not yet ended, and requested all to follow all necessary protocols and precautions to stay safe and healthy.

“When we remove the soul from our body, there is nothing remaining, similarly the spiritual heritage and culture of our country needs to be protected for the nation to thrive and  Prime Minister Narendra Modi has been leading from the front on this.” The Prime Minister is focused on enhancing pilgrim accessibility and their experience through connectivity, infrastructure and better facilities, the Minister added.

He said that for realizing the Prime Minister’s vision, the Ministry is working tirelessly towards improving the overall facilities and tourism infrastructure. The PRASHAD scheme is being implemented to improve the Tourism infrastructure like facilitation centers for tourists such as Information and Interpretation Centers, ATM and Money exchange facilities, Eco-friendly buses, lighting, parking, toilets, cloak rooms, first aid centers, rain shelters and internet connectivity at the Tourist locations.

Noting the projects implemented in the state, the Minister Sri Kishan Reddy said “So far under the PRASHAD Scheme, Uttar Pradesh and Uttarakhand together have close to 25% of the total allocation of approximately Rs. 1200 crores towards pilgrimage, spiritual and heritage rejuvenation”. “Moreover, Rs. 500 crores has been allocated for the state of Uttar Pradesh alone through the SWADESH DARSHAN scheme towards strengthening Tourism infrastructure within the state of Uttar Pradesh through various spiritual circuits such as the Ramayana and Buddha circuits”, the Minister added.

The Union Minister also highlighted the various programmes being conducted as a part of Azadi ka Amrit Mahotsav, as India celebrates its 75th year of independence. He requested for maximum people participation for the programmes that were being conceived keeping in mind our rich cultural heritage such as the Rangoli making competition and also programmes that were designed to invoke patriotic fervor among the masses such as the competition that requires composing patriotic songs. The Minister also congratulated the individuals and officials behind the successful completion of the project.

The project for “Development of Govardhan Mathura” under the PRASHAD scheme was approved by the Ministry of Tourism with the cost of INR 39.73 Cr. in January 2019. The components viz. ‘Multi Level Car Stand Block, Cloak Room & Toilets, Boundary wall and Surface development at Govardhan Bus Stand’ has been successfully completed with the cost of INR 15.82 Cr.

Other components sanctioned under the project include development of Mansi Ganga, Chandra Sarovar, Govardhan Parikrama and interventions at Kusum Sarovar. The illumination of the Kusum Sarovar is already completed and dedicated to the nation in February 2021. The work for all other components is in advanced stages of completion.

The components developed under the project have resulted in facilitation of pilgrims and enhancement of the pilgrimage experience. The interventions implemented have resulted in regulation of pedestrian traffic on the Govardhan Parikrama Path.

The ‘National Mission on Pilgrimage Rejuvenation and Spiritual Heritage Augmentation Drive’ (PRASHAD) is a Central Sector Scheme with complete financial assistance by the Government of India. The scheme has been launched under the leadership of Prime Minister by the Ministry of Tourism in the year 2014-15 with the vision of focused infrastructure development to harness pilgrimage and heritage tourism destinations for its direct and multiplier effect upon employment generation and economic development. The scheme aims at infrastructure development to envisage world class infrastructural development of the sites with special emphasis on Tourist Facilities including Tourist Facilitation Centres, way-side amenities Parking, Public convenience, Illumination and Sound and Light Shows.

In addition to the above-mentioned project at Govardhan, 5 more projects. have been sanctioned in the state of Uttar Pradesh under PRASHAD scheme of Ministry of Tourism. The total outlay of the projects sanctioned under the PRASHAD scheme for Uttar Pradesh is INR 139.75 Cr. The sanctioned projects include Development of Mathura Vrindavan as Mega Tourist Destination, Construction of Tourist Facilitation Center at Mathura, Development of Varanasi and Development of Cruise Tourism in River Ganga. Majority of components implemented under these projects have already been completed and dedicated to nation.