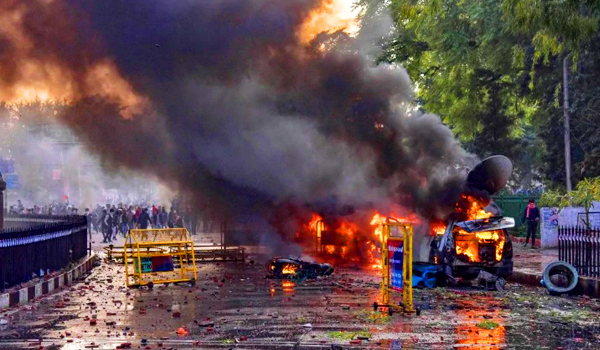 Lucknow, Dec 20  The large-scale protests over Citizenship (Amendment) Act (CAA) in and around Uttar Pradesh turned violent on Friday afternoon as protesters went on a rampage in six districts, pelting stones at the police, setting vehicles on fire and ransacking a number of police outposts.

Protesters pelted stones at the police, set motorbikes and cars on fire and ransacked police outposts in Hardoi and Farrukhabad.

In Deoband, though, the protests were relatively non-violent.

The stir across Uttar Pradesh are a part of several such protests that have seized cities across the country since Sunday. Protests were being held in scores of cities including Delhi, Gujarat, Patna, Bengaluru, Mumbai, Bhopal, Thiruvananthapuram, Chennai and Patna.

Security has also been beefed up across Uttar Pradesh, as police have registered 19 FIRs against unknown people, of whom 17 are ‘named’ including Samajwadi Party (SP) leader Shafiqur Rahman Barq in Sambhal district in connection with the violence during Thursday’s protest.

At least 3,000 people across the state, including 350 in Lucknow, have been arrested since Thursday night in connection with the violence against the recently amended citizenship law, police officials said on Friday.

Internet services have been shut down in 15 districts, including the capital, even Direct-to-Home (DTH) services were also snapped for sometime, police added.