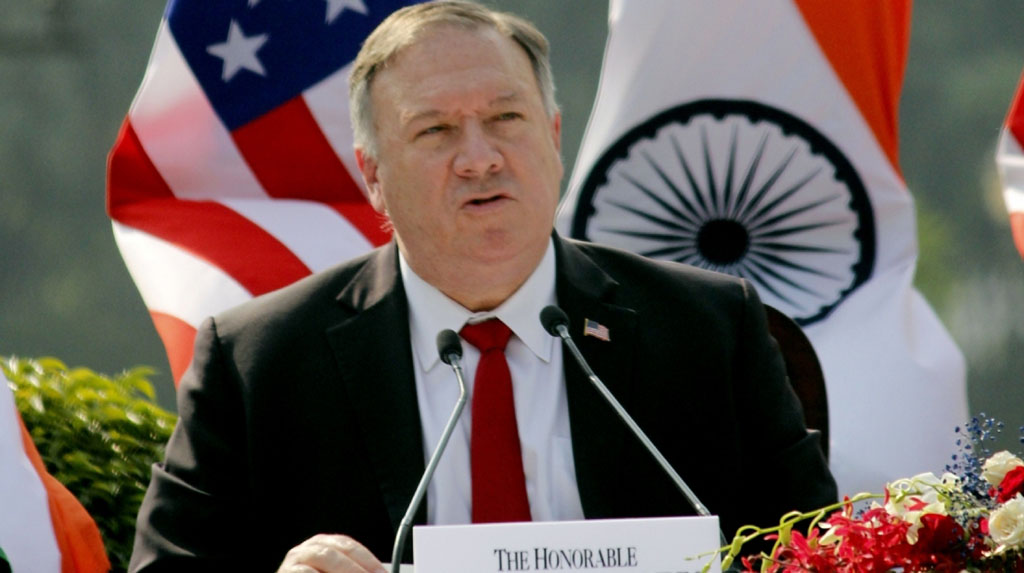 New Delhi: In a provocative message to Beijing, US Secretary of State Mike Pompeo said on Tuesday that Washington will provide any support to India as “deterrence” against China.

The statement came in his only television interview to Times Now after the 2+2 US-India Ministerial Dialogue held in New Delhi.

Pompeo’s statement is likely to ruffle the feathers in Beijing whose troops have been locked in a stand-off with the Indian Army along the Line of Actual Control (LAC) in Eastern Ladakh.

In response to a question whether the US has decided to offer India more than just diplomatic assistance in the event of a conflict with China or Pakistan, Pompeo said, “We did sign a series of important agreements but the agreements themselves were less important than the central understanding that came alongside them.

“What’s become very clear now is that there is a battle and the battle in the world is between freedom and authoritarianism, and India, like the Unites States, has chosen democracy and freedom and sovereignty and all the things that people of India care so deeply about. So when confronted by tyranny by the Chinese Communist Party, you can be sure that the US will stand by as partners. We will.”

“There are things that India can do that we can’t and there are things that we can’t achieve alone together. We can be force multipliers and deliver really good outcomes, not only for the people of India or the Indo-Pacific region, but for the entire world. So, as India has now confronted this challenge up in the north, the US is ready to do the things it can do to help deliver safety and security to the Indian people and I’m confident that India will do the same for us all around the world.”

When it comes to the Chinese Communist Party (CCP), he said the entire world is the frontline.

“The ambition, national rejuvenation, and the goal of CCP general secretary Xi Jinping is not local, it is not regional, that desire is global. You see it in the Belt and Road initiative that extends throughout Africa and through the Middle East. This is a global challenge and the freedom loving world must take it on together,” he told the news channel.

The US, he said, understands the challenge.

“You can watch the things that we are doing. We’ve made it more difficult for China to invest in the US. We just want fair and reciprocal trading. We built up our military like at no time in history. Our diplomacy has shifted. We now understand the challenge that is presided by this seemingly great power and we stand ready to assist all freedom loving nations all across the world,” he said.

Pompeo said the US will provide any support to India to deliver the deterrence.

“In any way the US is capable of providing support…we are confident that together we can deliver the deterrence. Like this is the mission, that’s the reason we had meetings like we had today here. What we spoke about today was doing the things that can deter the Chinese Communist Party aggression, not only against India but I’ll leave here…”

“And I’ll go to Sri Lanka and Maldives and to Indonesia. There are places that have a common set of understanding of the challenge and I’m hopeful that these nations will unite to deter and prevent what precisely you are raising as a concern,” he said.

Pompeo added that India and China are locked in a bit of a standoff. “Many troops on both sides, too close and we attempt, we think the Indian Government hopes for there to be a disengagement,” he said.

In response to whether he thought there was a possibility of a de-escalation, Pompeo said, “I think anytime a nation shows weakness, you invite Chinese Communist Party’s aggression…We have encouraged the Chinese to de-escalate for sure. We think that’s in China’s best interest, we think it’s in India’s best interest and world’s best interest. That’s our mission. We don’t want a conflict there. We want peace everywhere.”

“We just signed this historic Abraham accord, you think it is disconnected from this region but it’s not. It is the same thing. It is a set of countries coming together under a shared of understandings and principles. It says, you know, hatred of another nation isn’t foreign policy… Build technological relationships, build economic relationships. Don’t hate, just build.

“If we do that, the US is confident that the world can be a more safe and secure place and it has worked so wonderful today, with my counterpart S Jaishankar, with Defence Minister (Rajnath) Singh. We talked about how we can, on behalf of our country, deliver those kinds of outcomes for each of our people,” Pompeo said.

One should never mistake working alongside another nation as giving up any sovereignty, Pompeo asserted.

“There is often this perceived notion, oh you are receding your sovereignty to another nation, but I actually think it is the opposite. I think that cumulative sovereignty of any nation is enhanced by having these partnerships, and countries that can work together. I think India has seen that and working alongside US, you know that they are more capable, more sovereign, and they can make better decisions for their people and the US can do the same for theirs,” he said.