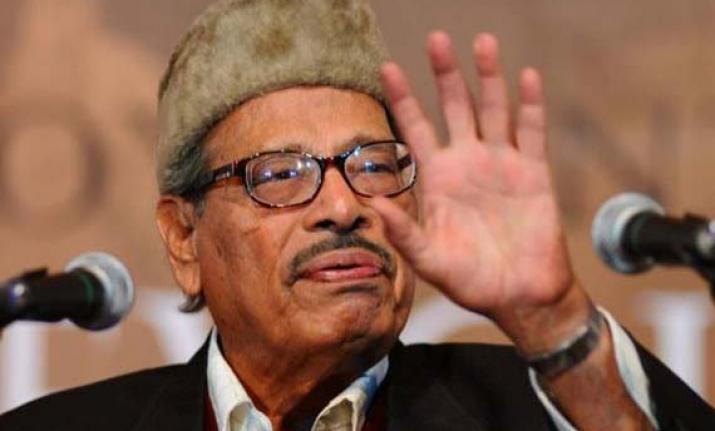 Versatile singer Manna Dey would have celebrated his 100 th birthday had he been alive and the film fraternity believes the singer-actor would have been a hit with audiences even today.
The music maestro, whose voice has mesmerized generations of listeners, was paid tribute by a large number of fans here in the city on his birth centenary.
Marking the day in a befitting manner, different socio-cultural organisations held elaborate programmes across the state. Besides, local satellite television channels aired an array of special programmes to pay tribute to the legendary singer.
To mark this day, West Bengal Chief Minister Mamata Banerjee paid tribute to the iconic singer on the occasion.
“Tribute to Manna Dey, legendary singer, on his birth anniversary. We had honoured him with the first-ever Banga Bibhushan award in 2011,” Ms Banerjee posted on her social networking page.
Bengali actor Prosenjit Chatterjee in his tweet said, “Remembering the legendary voice behind many such evergreen retro classics on his birth anniversary.”
Actress Arpita Chatterjee tweeted, “My homage to the legendary singer Manna Dey on his 100th birth anniversary. His heart-touching songs will always be alive in our hearts.”.
Cricket commentator Harsha Bhogle in a tweet said, “ #MannaDey would have been 100 today. What a legacy he has left behind.”
Born on May 1, 1919, Prabodh Chandra Dey known by his nickname Manna, is considered one of the most versatile and celebrated vocalists of the Hindi film industry. He was one of the playback singers credited with the success of Indian classical music in Hindi commercial movies.
” Not only our elders, but the young generation also likes the songs of Manna Dey.” One of the die-hard fans of Manna Dey at Lake Town in North Kolkata, Parimal Basu, told UNI today, “Coffee house er sei adda ta aj r nei ”(The gossip at coffee house is no more,is no more)
“It’s very true that nobody will live forever but his memories will always remain live…And I wish his holy soul will rest in peace in heaven!!,” he added.
The legendary singer made his debut as a playback singer through lending his voice to the numbers of film ‘Tamanna’ in 1942. Though the maestro sang mainly in Hindi and Bengali; he recorded more than 4000 songs in several Indian languages like Bhojpuri, Magadhi, Maithili, Punjabi, Assamese. Odia, Konkani, Sindhi, Gujarati, Marathi, Kannada, Malayalam, and Nepali.
Manna Dey had carved a niche in the hearts of millions, presenting some hit numbers like Coffee Houser sei addata aaj ar nei, Aami kon kotha jey boli’, Aami jey jolsha ghorey, Aami jamini tumi soshi hey, and Ora je jaa boley boluk naa.
The iconic singer will remain alive in his memorable numbers, including Poochho Na Kaise Maine, Ae Meri Zohra Jabeen, Zindagi Kaisi Hai Paheli, Yeh Dosti, Ek Chatur Naar, Laga Chunari Mein Daag, Meri Naina Talash Karey Tujhey, Yaari Hain Imaan Mera Yaar Meri Zindagi and Kasmey Vadey Pyar Wafa Sab.
Yeh Dosti from Sholay: Undoubtedly, a cult song, the duet between Manna Dey and Kishore Kumar is considered to be an anthem-of-sorts on friendship and was picturised on Amitabh Bachchan and Dharmendra.
Aao Twist Karein from Bhoot Bangla: With this 1965 rock n roll number, Manna Dey broke free from his classical music bent and showed a whole new other side to his vocal talents.
Aye Meri Zohra Jabeen from Waqt: Another cult classic, the qawwali composition from the 1965
A duet by Lata Mangeshkar and Manna Dey, the song from Chori Chori is one of the most romantic numbers to have been created in Bollywood.
Manna Dey gave some of his best songs for Raj Kapoor in films like “Chori Chori”,” Mera Naam Joker”, “Shree 420” and even “Bobby”.
Among some of his memorable songs are intensely romantic tracks like “Kyon Dipak Jalta Hai’ (film “Saara Akaash”) and “Pyaar Hua Iqrar Hua” (“Shree 420”).
Dey’s musical journey spanned decades and has admirers from every generation, even today. His peak period in Hindi playback singing was from 1953 to 1976.
As an ode to his illustrious career, Manna Dey was honoured with Padma Shri award in 1972, Padma Bhushan in 2005 and Dadasaheb Phalke award in 2007.

The legendary singer breathed his last in Bangalore on October 24, 2013 at the age of 94