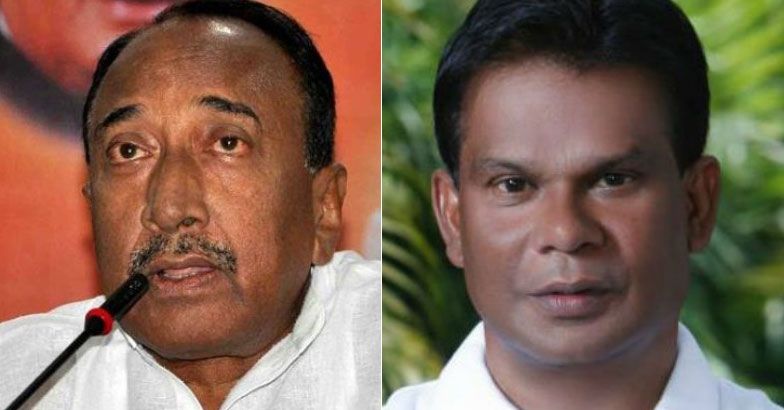 Ending months of speculations, two senior leaders, Bijoy Mohapatra and Dilip Ray, with their own strong political bases in coastal and western Odisha respectively, quit the Bharatiya Janata Party on Friday. Ray, who was the MLA from Rourkela, also resigned from the Odisha assembly.

In a joint statement sent to BJP president Amit Shah, both the leaders said: “We cannot be treated as furniture in the party while the ‘rootless’ talk big and project a larger than life image… The well-meaning suggestions by us to you were construed as a threat by certain egocentric, self-serving individuals who resorted to dirty tricks and a campaign was launched in our respective constituencies to try and deride us.”

The ‘rootless’ jibe is clearly targeted at Union minister Dharmendra Pradhan. Shah’s blue-eyed boy and the BJP’s projected face for the 2019 assembly elections, Pradhan has been elected to the Rajya Sabha twice from states other than Odisha.

The BJP, on the other hand, hit back at the duo saying that they were damaging the party from the inside. “It is not in the DNA of Mohapatra to work alongside others. He had distanced himself from [the] party after unsuccessfully trying to divide it into groups. Despite being national and state executive members, both Ray and he were not participating in any party meeting,” BJP state vice president Samir Mohanty said.

The BJP may try to belittle the senior leaders and say their exit will not have any impact. But their departure is evidently a setback for the party, which has been trying hard to upstage the Congress as the main opposition to the Biju Janata Dal government in the state. It may also puncture BJP president Amit Shah’s ambitious project of winning 120 assembly seats out of the total 147, thereby defeating the BJD in 2019.

Odisha is headed by chief minister Naveen Patnaik. Elections for the state assembly and Lok Sabha will be held simultaneously in 2019.

One of the most trusted deputies of the legendary Biju Patnaik, Mohapatra won consecutively from 1980 to 1995 from the Patkura assembly constituency in the politically volatile Kendrapara district. After a three-decade hiatus, Patnaik became the chief minister of Odisha in 1990, and made Mohapatra his irrigation minister.

Mohapatra was believed to be the most powerful man in the Janata Dal after the senior Patnaik. An astute organisation man, he still knows political workers in every block of the state by name.

Mohapatra was among the Janata Dal leaders who made Naveen Patnaik contest the Aska Lok Sabha seat that had fallen vacant after Biju Patnaik’s death in 1997. Later in the same year, he became one of the main architects of the BJD along with Ray.

Perhaps it was not possible for two overpowering leaders to coexist in the BJD. It is now part of folklore how Patnaik clipped Mohapatra’s wings with clinical precision by denying him a ticket for the assembly elections in 2000 at the last moment, leaving the latter no choice but to quit the party.

Mohapatra floated a regional outfit, Odisha Gana Parishad, in 2001. In the 2004 assembly elections, the OGP formed an alliance with Sharad Pawar’s National Congress Party and contested in four assembly seats. While three of the candidates won, Mohapatra himself lost to the BJD candidate. Later, financial constraints forced him to merge the OGP with the NCP. He became its Odisha head, but when the party’s central leadership decided to align with the BJD before 2009, Mohapatra resigned from the NCP.

The BJP welcomed him with open arms immediately. The national party, which had formed a coalition with the BJD since 2000, felt humiliated by the way Naveen Patnaik suddenly snapped all ties with it just before the 2009 elections. The BJP’s central leadership at the time perceived Mohapatra to be a worthy challenger to Naveen Patnaik. Ray too joined the BJP along with him.

Indeed, Mohapatra’s political acumen and grip over state-related issues came in handy for the BJP. After the BJP rode to power at the Centre in 2014, he sparkled as the party’s spokesperson for sometime with his regular press conferences targeting the state government. The same year, he was made the party’s campaign chief for a by-election for the Kandhamal Lok Sabha seat. Though the BJD won the seat comfortably, the BJP managed to upstage the Congress from second position.

But the BJP central leadership’s tenuous dalliance with the BJD made Mohapatra uncomfortable. He was vocal about the mining scam and the CBI’s lackadaisical investigation into the chit fund scam. He started getting sidelined for of his open criticism and because the central leadership, especially Amit Shah, hoisted Pradhan on the state organisation.

Dilip Ray, on the other hand, is a low-profile but highly resourceful man. Another ardent Biju Patnaik follower, Ray is the only politician from Odisha to be a Union minister of state in the ministries of three prime ministers – handling important portfolios like steel, industries, coal and parliamentary affairs.

Ray had parted with Naveen Patnaik after the latter rode to power in Odisha. The two-time Rajya Sabha MP successfully contested the assembly elections from his fiefdom Rourkela in 2014 on a BJP ticket. Political observers believe that Union tribal minister Jual Oram could win the Sundargarh Lok Sabha seat only due to Ray’s political base in the district.

Lately, however, Ray has been vocal about the non-fulfilment of promises by the prime minister and other central ministers on the construction of a bridge over the Brahmani river and a hospital project – Rourkela’s two long-standing demands.

Loss to the BJP

Pradhan’s dominance in the state BJP has made several senior leaders squirm and sulk. However, party sources say, most remain silent because he is backed by Shah. Nonetheless, it has led to friction in the party. Many attribute the BJP’s resounding defeat in the by-election for Bijepur early this year to alleged one-upmanship by the Union minister despite several rounds of visits by Shah and several central ministers.

Most senior leaders, including those like former Odisha chief minister Giridhar Gamang who joined the BJP from the Congress, lay by the wayside. The grip of the RSS over the BJP’s organisational structure also ensured that outside leaders did not have much importance in party affairs.

But considering their high stature in state politics, Mohapatra and Ray had maintained their dignity and had no qualms in calling a spade a spade. After their exit from the BJP, leaders from the BJD and Congress have indicated that they are most welcome to their respective parties. “They are assets to any party,” said a leader.

Mohapatra, especially, is a case study in politics. He has lost assembly elections thrice and not been in power for the last 18 years. But he has not lost his political importance. So much so, political analysts say, that the chief minister ensured the defeat of his erstwhile bête noire every time he contested in Kendrapara district.

In the run up to the Lok Sabha and assembly elections, political dynamics are changing fast. Both the leaders, especially Mohapatra, are factors in several areas of the state. This is the reason why the Congress seems eager to induct the duo into its fold as it tried desperately to retain its position as the main opposition in the state. The BJD may very well need their expertise and political ground to keep the aggressive BJP at bay, but it depends on how Naveen Patnaik and Mohapatra allow themselves to let bygones be bygones.

If both join the Congress, which many observers think is quite unlikely, it would end their years of anti-Congress politics. If they rejoin the BJD, things will come full circle.

(This article originally appeared in The Wire (thewire.in) on December 4)