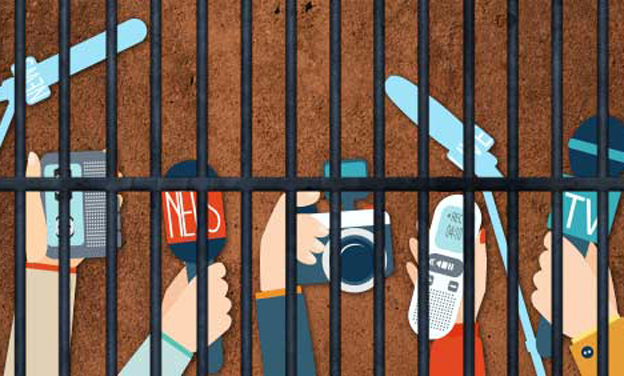 The year-end stock-taking and vigilance day meeting of the Delhi Union of Journalists (DUJ) has called for concerted struggles to save journalism and the journalists for tomorrow, against increasing attacks on their dignity, wages, and even freedom of expression through surveillance and other methods.
According to a press release issued here on Saturday, the meeting, held on Friday, resolved to oppose all moves to curtail media freedoms, whether these emanate from the government, media owners, political parties or other bodies. It expressed concern at recent government moves to increase surveillance of journalists and other citizens by monitoring their social media accounts.
It warned that a recent Union home ministry order authorising ten government organisations to intercept, monitor and decrypt “any information generated, transmitted, received or stored in any computer” can be misused to intrude into citizens’ lives. This order exercises powers under the Information Technology Act and Rules while monitoring of telephone calls is already permitted under provisions of the Telegraph Act. These are serious infringements on privacy and freedom of thought and expression.
The Executive also expressed its opposition to the frequent internet shutdowns that state governments are resorting to during any agitation, big or small. These shutdowns make it very difficult for journalists to send out news and do their jobs effectively. In the absence of credible news mischievous rumours abound, according to the DUJ president S.K. Pande and general secretary Sujata Madhok.
“Threats to journalists are a growing cause for concern, ranging from physical intimidation to outright murders by local mafias and other vested interests, besides the filing of cases against journalists for any criticism of the powerful. Arrests of journalists under the National Security Act and other preventive detention laws are a direct attack on press freedom. DUJ demanded that a law for protection of journalists be enacted by Parliament,” the press release said.
Other attacks are taking the form of defamation cases, with corporate groups intimidating the media by suing individual journalists as well as organizations for inordinate sums of money. DUJ demanded that the criminal and civil defamation laws be amended to prevent such misuse.
On the issue of working conditions the Executive reiterated the demand for the setting up of a fresh Wage Board and an end to contract employment in the media. It condemned the moves to repeal many protective labour legislations including the Working Journalists & Other News Paper Employees (Conditions of Service & Miscellaneous Provisions) Act, 1955 and the Working Journalists (Fixation of Wages) Act, 1958 and replace them with Labour Codes.
It expressed concern at attempts to downsize the leading news agency PTI and shut down UNI. These moves seem intended to promote other news agencies and also threaten the survival of the Urdu media, language media at the expense of rewarding government backed agencies and select proprietor big press barons.
The year 2018 saw the “MeToo” explosion rocking the media and the shocking exposes of sexual harassment of media women led to several resignations of top editors and a senior minister. The DUJ salutes the brave women who spoke up against such exploitation. It took note of the fact that increasing complaints were being received even from the Doordarshan.
The Executive reiterated its longstanding demands for a new Media Council of India to replace the Press Council, to make it still wider to include the new emergent media spectrum of today.
It called for a new Media Commission of India simultaneously- to protect and promote the rights of journalists working in the entire news media industry after proper study of the media today. This could be done by a more autonomous media commission than the first two press commissions, with more exerts from the entire media spectrum including Unions and associations.
A phased programme of action starting next month, along with its National Alliance of Journalists and other associate bodies on common demands is being finalized. An expanded Gender Equity Council, comprising all office functionaries with equal representation to women and solidarity actions with central and state trade unions on issue to issue basis was also discussed. (UNI)