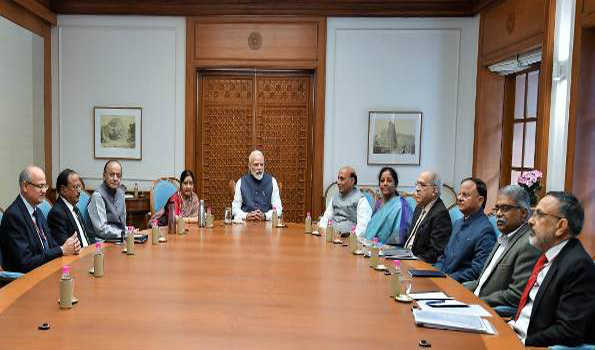 An informed source called it a ’20-minute pre-dawn strike’ but declined to divulge details. The air strike was reportedly launched at 3.30 am and was carried on 12 locations.

Springing a surprise Congress president Rahul Gandhi and Delhi chief minister Arvind Kejriwal were among the first on Tuesday morning to applaud the airstrikes by the Indian Air Force across the LoC that reportedly had JeM camps. ”I salute the pilots of the IAF,” wrote Gandhi taking to micro-blogging site Twitter.
Kejriwal echoed the same sentiments, saying he was proud of the IAF pilots who have made the country proud by striking terror targets in Pakistan. ”I salute the bravery of Indian Air Force pilots who have made us proud by striking terror targets in Pakistan,” Kejriwal tweeted.

Reacting to the air strike, Union minister and senior BJP leader Prakash Javdekar said that it was “necessary for the security”. He said that Modi had allowed free hand to the defence forces and they have shown their power.

After the strike, Modi chaired a crucial meeting of the Cabinet Committee on Security, which was being attended by national security advisor Ajit Doval also. Defence minister Nirmala Sitharaman, finance minister Arun Jaitley, external affairs minister Sushma Swaraj and home minister Rajnath Singh — all members of CCS were present at the meeting.
From the Indian Air Force, there is no comment as of yet but government sources say the NDA regime is committed to ‘walk the talk’.

Former military officers and defence experts say the impact has been huge. Reports suggest the air strikes have ‘destroyed’ terror camps near Balakot.

“If we go for such major exercise, it is obvious we will be carrying adequate materials to cause the bigger damage we want. So, please wait for some time. I am sure over the period of time, some photograph or something will be given out,” Air Marshal (Retd) B K Baburao told a television channel.