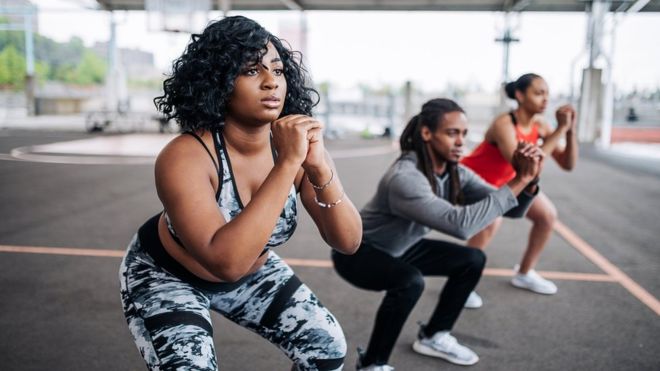 Nearly everyone can lower their risk of dementia, even if it runs in the family, by living a healthy lifestyle, research suggests.

The study of nearly 200,000 people showed the risk fell by up to a third, James Gallagher Health and science correspondent, BBC News, on Sunday said in his report.
The team at the University of Exeter said the results were exciting, empowering and showed people were not doomed to get dementia.
The findings were revealed at the Alzheimer’s Association International Conference.
What counts as a healthy lifestyle?

The researchers gave people a healthy lifestyle score based on a combination of exercise, diet, alcohol and smoking.
This is an example of someone who scored well:
* Doesn’t currently smoke
* Cycles at normal pace for two-and-a-half hours a week
* Eats a balanced diet that includes more than three portions of fruit and vegetables a day, eats fish twice a week and rarely eats processed meat
* Drinks up to one pint of beer a day
And an unhealthy one?
* Currently smokes regularly
* Does no regular exercise
* Eats a diet that includes less than three servings of fruit and vegetables a week, and includes two or more servings of processed meat and of red meat a week
* Drinks at least three pints of beer a day
How easy is it to do?

Sue Taylor, 62, from Exeter, has seen the impact of dementia on a family – both her mother and grandmother had the disease. She takes exercise classes in the park three times a week – even in winter – and has a 45-minute walk before work.

“It takes a lot of effort, you have to think about it and make it fit in,” she told me.
But she says it’s worth it, especially for her grandchildren.
“I just want to keep my brain as sharp as possible for as long as possible. I don’t want them to miss out on having grandparents both physically and mentally,” she said.
So how big a difference did lifestyle make?
The study followed 196,383 people from the age of 64 for about eight years.

It analysed people’s DNA to assess their genetic risk of developing the disease.
The study showed there were 18 cases of dementia per 1,000 people if they were born with high risk genes and then led an unhealthy lifestyle.
But that went down to 11 per 1,000 people during the study if those high-risk people had a healthy lifestyle.
It doesn’t seem like a big difference?
The figures might seem small, but that is because your mid-60s are relatively young in terms of dementia.
The researchers say cutting dementia rates by a third would have a profound impact in older age groups where the disease is more common.
“It could equate to hundreds of thousands of people,” Dr David Llewellyn, told the BBC.
Also, this type of research cannot definitively prove that lifestyle causes different risks of dementia. It simply spots patterns in the data.
But the results, published in the Journal of the American Medical Association, fit with previous research and World Health Organization advice.

Can I dodge dementia completely?

Sadly, you can live the life of a saint and still get the disease. Lifestyle just changes the odds.
However, there are still no drugs to change the course of this disease.
Reducing your chances is all anyone can do.

Does this apply to everybody?

The findings may not apply to people with very early onset dementia that starts when people are in the 40s and 50s, say the researchers.
But they think their results would apply to people in older age groups when dementia gets more common.

The researchers say the study applies to dementia in general rather than specific forms of the disease like Alzheimer’s or vascular dementia.
What is the key message?

“Even if you’re worried about dementia, maybe you’ve got a family history yourself, what our research suggests is it doesn’t matter, Dr David Llewellyn, told the BBC.
“You’re still likely to lower your own risk of dementia substantially if you change to a healthy lifestyle.
“That’s really empowering.”
Fellow researcher Dr Elzbieta Kuzma said it was the first time anyone had shown you could counteract an inherited risk of dementia and the findings were “exciting”.
What do the experts say?
Fiona Carragher, from the Alzheimer’s Society, commented: “With one person developing dementia every three minutes in the UK, knowing how to lower our dementia risk couldn’t be more vital.
“So hit that salad bar, swap a cocktail for a mocktail and get your exercise kit on!”
Dr Carol Routledge, from Alzheimer’s Research UK, said the findings were “important”.
“This is yet more evidence that there are things we can all do to reduce our risk of developing dementia, yet research suggests that only 34pc of adults think that this is possible.
“While we can’t change the genes we inherit, this research shows that changing our lifestyle can still help to stack the odds in our favour.”