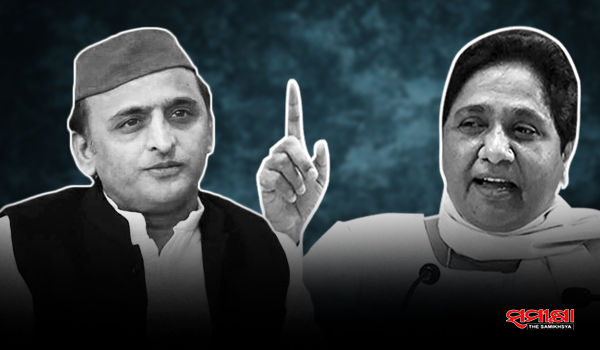 Bahujan Samaj Party (BSP) president Mayawati snapped ties with its ally Samajwadi Party in Uttar Pradesh Monday just after over six months of the formation of so called ‘Mahagathbandhan’ blaming the behaviour and attitude of the SP for the ‘break-up’.
However, the decision of the BSP ,which was expected after Sunday’s meeting here, also vindicates the claim of senior BJP leaders that the “Mahagathbandhan” will be in pieces after the Lok Sabha polls.

On January 12 last, BSP-SP had announced their “Mahagathbandhan” for UP Lok Sabha polls where BSP contested on 38 seats and SP on 37 while leaving 3 for the RLD and 2 for the Congress. In the polls, BSP won 10 seats, SP five and Congress just one.

In a tweet Monday, Mayawati said, ” the behaviour of the Samajwadi Party after the Lok Sabha polls has forced us to take such decision as unitedly we would not be able to defeat the BJP. Hence for the party’s interest, we have decided to contest any polls, big or small, alone.”

She also tweeted that BSP had forgotten all about the past as to how during the SP regime in 2012-17, despite dalit atrocities and anti-dalit decisions including opposition to reservation in promotions to them, BSP went for alliance with the SP and had fulfilled the coalition dharma.

But Ms Mayawati blasted media reports about the meeting held in Lucknow on Sunday.” The All India meeting of the BSP continued for two-and-a-half hours and the state wide meeting continued till late night where media was not allowed. But unfortunately reports published and telecast in the media were not totally correct though we had issued a press statement.”

Mayawati had recently announced her decision that the BSP will contest the upcoming by-elections for twelve assembly seats in UP alone, stating that her ally Akhilesh Yadav-led Samajwadi party vote base did not support the coalition in the Lok Sabha elections.

However, the media report that SP president Akhilesh Yadav asking Mayawati not to field large number of Muslim candidates as it could polarise the polls while BSP’s chief allegation that Akhilesh did not talk to her after the LS debacle, could not be authenticated.

At the Sunday’s meeting, the party had re-appointed Mayawati’s brother Anand Kumar as the vice president of the party while nephew Akash Anand has been designated as the national coordinator of the party.
In an earlier instance, Anand Kumar was named the party’s vice-president but removed after allegations of dynastic politics were leveled against Mayawati.
The elevation of Mayawati’s nephew’s is being considered crucial as he is reportedly among the front-runners to take over the party after her. When Akash was included in the list of party’s star campaigners ahead of polls, a BSP leader had said, “Akash’s inclusion in the star campaigners’ list could be the beginning of an exercise to give him something big in the near future.”

BSP had also announced to appoint Amroha MP Danish Ali as the leader of the party in Lok Sabha. Senior BSP leader Ramji Gautam, has also been appointed as the national coordinator of the party. The move gains importance as it comes ahead of the by-polls on 12 assembly seats in Uttar Pradesh, with the party attempting to revive its cadre as well as attract youth. Nagina MP Girish Chandra has been appointed the chief whip in the Lok Sabha.

Danish Ali, a close aide of Karnataka chief minister HD Kumaraswamy and former Prime Minister HD Deve Gowda, is considered instrumental in stitching the BSP-JDS alliance for the assembly polls. Ahead of the Lok Sabha elections, he joined the BSP.

The BSP meeting also discussed other important issues, such as the removal of Electronic Voting Machines (EVMs) and holding elections through ballot papers all across the country.