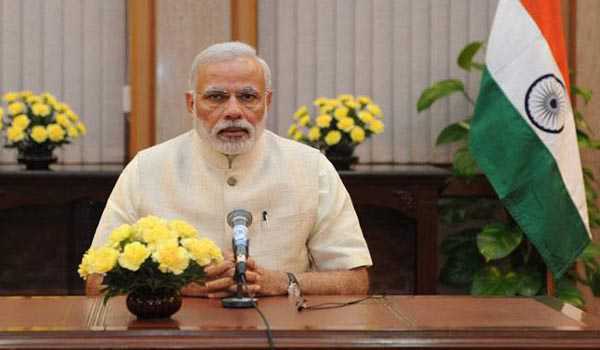 In a crucial election year and amid hyped controversy sparked off by the opposition parties questioning the genuineness of Electronic Voting Machines, Prime Minister Narendra Modi on Sunday lauded the role of the Election Commission in conducting polls successfully at such a high scale in the country.

“I appreciate the Election Commission for relentlessly striving to ensure the strengthening of our democracy. I hold in high esteem, the Election Commissions of all states, security personnel and other staff members who contribute in ensuring strict adherence to free and fair polling,” said Modi in his monthly radio broadcast ‘Mann Ki Baat’ through All India Radio.

He said the conduct of polls in the country in a transparent and accountable manner should make every Indian feel proud about it.

“It is natural for every citizen to feel proud of the Election Commission of its meticulous organising abilities. Our country leaves, no stone unturned to ensure that every citizen of India who is a registered voter, rightfully avails of the opportunity to cast his vote,” the Prime Minister said in his first Mann Ki Baat programme of the year 2019.

In the recent past the opposition parties have tried to attack the EVMs deployed by the Election Commission for conduct of elections –  even as the charge has been vehemently opposed by the poll panel.

At Kolkata rally organised West Bengal Chief Minister Mamata Banerjee on January 19, National Conference stalwart Farooq Abdullah had called the EVMs as ‘chor machine’.  Several other opposition parties including the Congress from time to time have expressed doubts on the authenticity of the EVMs.

On December 7, 2018, Congress president Rahul Gandhi asked party workers to be vigilant about the EVMs. “In Madhya Pradesh, the EVMs behaved strangely after polling: Some stole a bus and vanished for two days. Others slipped away and were found drinking in a hotel. In Modi’s India, the EVMs have mysterious powers,” Gandhi has tweeted.

In his radio broadcast, Prime Minister said: “Whereas we hear of a polling station at 15,000 feet above mean sea level in Himachal Pradesh, we also learn about the same being organised in remote islands of the Andaman Nicobar archipelago. And you must have heard about Gujarat … in a remote place in Gir forest, there is a polling booth for a sole voter”.

“Just imagine … for that one and only voter,” said Modi. “These facts are bound to instill a sense of pride, of the commitment of the Election Commission”.

Caring for that lone voter, for ensuring that he or she enjoys full opportunity to exercise the right to vote, personnel of Election Commission travel to distant remote places to make necessary arrangements for the voting, the Prime Minister said adding “this is the beauty of our democracy”.

Modi also said that this year’s general elections will be important and crucial in more ways than one as for the first time those born in the new century will be eligible to exercise their franchise. “Unke liye desh ki jimmedari apne kandho par lene ka avsar aa gaya hae (Those who were born in the 21st century, time has come for them to take the responsibility of the country),” he said.

“I urge the young generation to register themselves as voters, if they are eligible. All of us must realise that being a voter, earning the right to vote is an important rite of passage in one’s life; it’s one of the achievements,” the Prime Minister said.

He also hastened to add at the same time that to cast vote is also each individual’s “national duty” in reference to the fact that those born in circa 2000 would be now eligible to cast their votes for the first time as all of them would have turned 18 plus.

The remarks from the Prime Minister are significant as these have come weeks before the country actually plunges into the election mode. The Lok Sabha elections this year are due by April-May.

“For any reason, if one is not able to vote, it should pain one. One should be saddened to witness any wrong taking place in the country,” the Prime Minister said. (UNI)