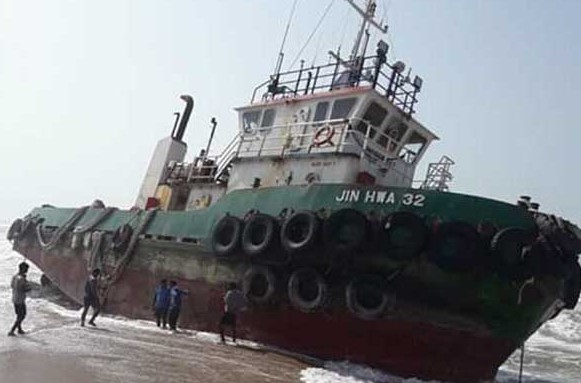 Noted environmentalist Jagannath Bastia today expressed serious concern over the inaction of the Odisha government and the ministry of shipping and transport to  shift a cargo vessel from Chilika lake, an ecological sensitive wetland to prevent possible oil leak.A Malaysia cargo vessel which began its journey from Bangladesh drifted into Chilka lake  following a technical snag and was lying in the shallow water of the lake near the Khirisahi village of the lake since  August 8 last .The nine member crew including an Indian of the vessel were provided shelter in the village by the villagers.

The ship has over 33,000 litres of fuel in its container and one thousand litres of lubricants.Since there was no harbour and the vessel is not moored on its  anchors it started tilting and the  hull of the vessel is going deep down into sandy coast which could lead to oil slick, Mr Bastia said. Since the area is rich in biodiversity,  he feared it could damage the ecology of the lake badly . In a letter to Central Pollution Control Board  Chairman S P Singh Parihar, the  environmentalist    requested to take  urgent steps to ensure early shifting of the cargo vessel from the lake as there is every possibility of oil slick from the container of the vessel .

Meanwhile, officers of Indian Navy and Coast Guard had threatened to initiate legal proceedings under sections of  356 (k) of shipping and merchant vessels Act  against the shipping company if it did not shift the vessel from the lake. The two experts who came from Paradip to  rectify  the technical snag returned without carrying out any repair. Chilika Development Authority (CDA) has also did precious little except assuring people that there would be no oil leak and  the lake is safe. Environmentalist feared that  if the ship was not shifted from the lake it is likely to go down into the water as the  hull is sinking day by day into the sand dune  effectuating oil spill in the lake waters. The fishermen living in and nearby the lake and near the sea coast were worried as the oil slick would adversely affect their livelihood.