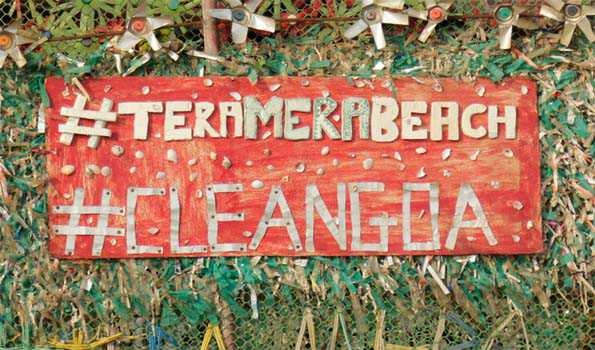 The second season of the unique public awareness campaign #TeraMeraBeach which was rolled out by Drishti Marine last season kicked off on January 30, 2019, and is to run till the end of the tourist season.

Through the #TeraMeraBeach campaign Drishti Marine, a state government appointed agency, aims to educate people, especially visitors on cleanliness and beach management along the coastal stretch through music and art to raise awareness on keeping Goa’s beaches clean. The campaign will feature a unique waste – bar, art installations and beach clean-up drives.

In an exclusive interview to UNI, Drishti Marine chief executive officer Ravi Shankar explained the idea behind the campaign.

He said in a bid to improve the cleanliness on Goa’s beaches, the state government had reached out to Drishti Marine in December 2016 to step in and assist with garbage collection along the beaches on a temporary basis to support the effort of the government.

Accordingly, Drishti Marine has offered its assistance and mobilised manpower and equipment for clearing garbage from the beaches of Goa and the same is transported to the Saligao waste management plant, he said, adding the agency had an existing framework which included infrastructure and management capability to effectively carry out the exercise along the beaches.

“Through the #TeraMeraBeach campaign Drishti Marine aims to educate people, especially visitors on cleanliness and beach management along the coastal stretch through music and art to raise awareness on keeping Goa’s beaches clean,” he said.

Speaking about the the campaign run last year, he said, “We ran an extremely successful campaign over 150 days in the last tourist season with an intention to create awareness on beach clean-up and teach people about the importance of waste segregation. We made a significantly positive impact on that front and hence have decided to run the campaign this season as well. Starting this month, the campaign will feature beach clean-ups and spread awareness in an engaging manner.”

He said this year a unique waste-bar concept had been introduced whee people could use waste as currency.

“This year we have introduced the unique waste-bar concept where people can trade using waste as currency. For example in exchange of ten bottle caps (plastic or aluminium) we offer a beer, cocktail or goti soda. One can also trade in 20 cigarette butts or five used plastic straws for a beer, cocktail or goti soda. We want to drive the message that trash has value – if collected and segregated properly. We are also trying to help beach shacks to reduce the use of disposable plastic like straws and make the transition to being a more sustainable operation. The campaign will run till the end of the tourist season,” he said.

Ravi Shankar claimed that the campaign was helpful in creating awareness among people, specially those visiting beaches of the state.

“Yes It was. The response last season was phenomenal with visitors and tourists coming forward to participate and taking back the awareness that it is the responsibility of each of us to keep our beaches clean,” he said. (UNI)