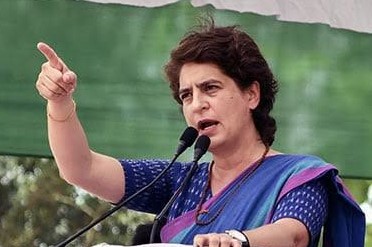 Prayagraj, Oct 26(UNI) Uttar Pradesh Congress has claimed that party general secretary Priyanka Gandhi Vadra will lead the party in the 2022 Assembly elections in the state. Party’s only MLC Deepak Singh, who was here on Friday, claimed that party will contest the poll in UP under the leadership of  Ms Vadra.

“Congress will come to power in UP in the 2022 Assembly polls under the leadership of Ms Vadra,” he said, while refusing to comment on chief minister projected before the polls.”In Congress, the CM is decided after the polls,” he said.

On the just concluded 11 bypolls in the state,  Mr Singh said that the poll percentage of the Congress has increased and now  the people of the state are waiting for the 2020 polls. “The countrymen are fed up with the Narendra Modi government and Congress will be the alternative,” he said.

The Congress MLC also visited the Naini central jail to meet the jailed NSUI student leaders. These leaders were put in jail after they held demonstration demanding reinstatement of Students Union. Supporting the revival of students union, the leader said the issue would be raised in the UP legislature in the next session.