A rare sail fish caught by fisherman in Gahirmatha sanctuary 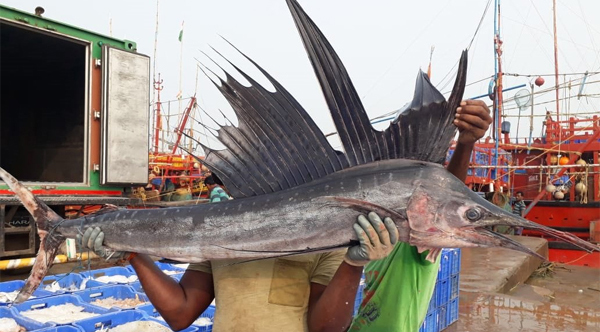 A rare sail fish weighing nearly 13 kg was caught by a fisherman in Talchua area under Rajanagar block within Gahiramatha sanctuary last night. The fishermen said the fish, belonging to billfish family would be transported to Digha for sale.

Locally known as Mayur fish it has medicinal value and would be sold at Rs 10,000 per kg at Digha. Sailfish are considered the fastest fish in the sea, and can live up to 13 to 15 years.

Hundreds of people congregated at the Talachua jetty to have a glimpse of the fish after it was brought from the sea to the shore this morning. Experts said the fish is not an endangered species.  (UNI)